According to biologist David Furman of Stanford University, “Every year, the calendar tells us we’re a year older. But not all humans age biologically at the same rate. You see this in the clinic — some older people are extremely disease-prone, while others are the picture of health.”

Some have suggested that our epigenome — the sum total of the chemical changes to our DNA — can determine our biological age and predict how soon we are likely to have serious age-related health issues.

Now, Stanford scientists have discovered a different way of ascertaining our future expiration dates: the “inflammatory-aging clock” (iAge). Determining someone’s iAge is not only far simpler than performing epigenetic tests. It can also help individuals and their physicians anticipate and confront health issues before they happen. 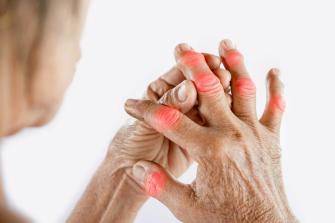 One of the things that distinguishes people who remain healthy longer from others is the strength of their immune system.

One of the immune system’s primary tools is acute inflammation. This is a “good” process because it is the body’s localized, protective response to things like tissue damage, invasive microbes, or metabolic stress. Importantly, it is a short-term response that lasts only as long as needed for the immune system to finish its job.

On the other hand, long-term, system-wide inflammation is “bad.” This form of inflammation causes organ damage and is associated with aging. It makes a person vulnerable to a whole range of conditions, including heart attacks, cancer, strokes, arthritis, cognitive decline, depression, and Alzheimer’s.

Understanding inflammation as a measure of age

Furman is the director of the 1000 Immunomes Project, “the world’s largest longitudinal population-based study of immunology and aging.” As such, he had access to blood samples taken from 2009 to 2016 from 1,001 healthy people aged 8-96.

Artificial intelligence (AI) analysis of the samples allowed the researchers to identify protein markers in the blood that most reliably indicated a person’s inflammation age. They identified a specific cytokine, CXCL9, as being especially useful. When processed by an algorithm the team devised, it produced a simple inflammation-age value. Comparing this to the patients’ histories, it turned out to align with the health of their immune systems and subsequent encounters with age-related disease. CXCL9, produced by the inner lining of blood vessels, is associated with heart disease.

The researchers verified the validity of their system by measuring the iAge of people 65 and older who had had their blood drawn in 2010. When they followed up with these people in 2017, the scientists found that their 2010 iAge turned out to be a more accurate predictor of their health than their chronological age.

Finally, the researchers tested their iAge algorithm with 29 long-lived people from Bologna, Italy — only one of whom had not yet turned 100 — comparing them to 18 average 50-79-year-old individuals. The inflammatory age of all the Bolognese participants averaged about 40 years younger than their chronological age. Furman reports that one 105-year-old man had an inflammatory age of 25.

CXCL9 is easy to measure and may have significant clinical applications. Specifically, it highlights the value of addressing chronic inflammation as a way to increase longevity.

Most promisingly, a person’s iAge could serve as an important early-warning system. Furman notes, “Our inflammatory aging clock’s ability to detect subclinical accelerated cardiovascular aging hints at its potential clinical impact.” He adds, “All disorders are treated best when they’re treated early.”

Stem cell-derived chondrocytes could be the key to regenerating damaged cartilage.
Up Next
Starts With A Bang

Ask Ethan: Is There A Hidden Quantum Reality Underlying What We Observe?

Light is well known to exhibit both wave-like and particle-like properties, as imaged here in this 2015 photograph. What’s less well appreciated is that matter particles also exhibit those wave-like […]