Do you know what the first three nonspectral colors are? Nope. Neither do we or any other humans. Maybe you should ask a hummingbird. The colors we know are part of the visible spectrum, a series of electromagnetic waves whose lengths are between 380 and 700 nanometers. (Electromagnetic waves repeat, and a wavelength is the distance between one repeat and the next.)

There are electromagnetic waves whose length is shorter or longer, but we lack the ability to see them. There is some evidence that other species can see these wavelengths — most famously the mantis shrimp — and a new study affirms that hummingbirds can indeed detect non-spectral wavelengths, and thus colors. As if these little creatures weren’t already amazing enough. 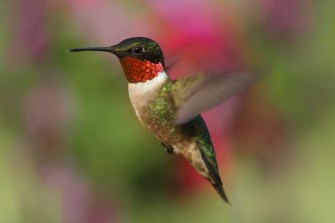 People all over the world exhibit a fascination with the tiny, beautiful avians that are birds unlike any other. Minute yet powerful, these incredible little energy bombs annually migrate great distances, living only on nectar and sugar water during visits to gardens — anyone who’s ever annoyed a hummer by changing their food at feeding time can attest that these little buzzing creatures are not shy. Before getting into hummingbirds’ remarkable color perception, here are a few other jaw-dropping stats: 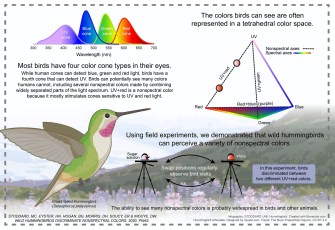 The new study in Proceedings of the National Academy of Sciences of the United States of America explains why its authors believe hummingbirds can see non-spectral colors.

First, the researchers recruited some volunteers: wild broad-tailed hummingbirds (Selasphorus platycercus). The experiments took place at the Rocky Mountain Biological Laboratory (RMBL) in Colorado, an environment researchers took pains to keep as natural as possible during the three-year study. Scientists from Princeton, the University of British Columbia (UBC), Harvard University, University of Maryland, and RMBL were involved in the experiments.

Before dawn each day, the researchers set up a pair of feeders for the birds — one with a rewarding drink of sugar water, the other with unsweetened plain water. Next to each feeder was an LED tube capable of emitting a broad range of colors, including nonspectral colors. Over the course of several hours, the hummingbirds learned that one color — sometimes a nonspectral color — signified the rewarding tube, and another color the plain water. When the feeders’ positions were swapped, the hummingbirds simply followed the color, even if it was one the researchers themselves couldn’t discern.

The tests were run with various spectral and nonspectral color pairings for the two feeders, and the hummingbirds apparently couldn’t have cared less which kind of color was employed — they quickly learned where the sugar-water feeder was. The researchers also ran control experiments to make sure the birds weren’t being tipped off by smell or some other cue.

Though the experiment was fundamentally pretty simple, the results are stunning. Lead author Mary Caswell Stoddard of Princeton says, “To imagine an extra dimension of color vision — that is the thrill and challenge of studying how avian perception works.”

Human eyes have three types of color receptors, or cones, each of which responds most strongly to a specific range of wavelengths — S-cones specialize in blue, M-cones green, and L-cones red. From combinations of those three basic hues, our eyes and brains present us the millions of colors we perceive.

Though hummingbirds come nowhere near the mantis shrimp’s twelve-plus collection of cone types, they do have four, which endows them with tetrachromacy. If we, with our trichromacy, can construct so many colors from three basic hues, imagine what adding a fourth might do. In the hummingbirds’ case, the fourth cone type perceives ultraviolet light that can be added to the other three hues for unimaginable (to us) combinations.

“Humans are color-blind compared to birds and many other animals,” points out Stoddard. We can only wonder what these colors actually look like to hummingbirds. As RMBL’s David Inouye says, “The colors that we see in the fields of wildflowers at our study site, the wildflower capital of Colorado, are stunning to us, but just imagine what those flowers look like to birds with that extra sensory dimension.”

No oxygen? No problem.
Neuropsych

Despite the wide diversity of spider species, most orb-weavers seem to follow the same playbook when building their webs.
Up Next
Life