Back in 1677, a Dutch scientist named Antonie van Leeuwenhoek, dubbed “the father of microbiology,” discovered what appeared to be tiny, squirming “animalcules” in a sample of his own semen observed under his newly developed microscope. He described these microscopic beings, now known as sperm cells, as “a small earth nut with a long tail” that propels itself forward by lashing its tail from side to side similar to an eel swimming in water.

For the last 350 years, science has accepted that 17th century visual model for sperms’ movement toward an egg.

Now, a team of researchers has finally upended that assumption. A new study published in Science Advances shows that sperm don’t slither like serpents, which is actually an optical illusion. Rather, they corkscrew forward like playful otters.

Researchers from the United Kingdom and Mexico recently used a high-speed camera and 3D microscopy devices to capture sperm’s movement, and what they found will restructure what we understand about one of the most essential biological functions. Rather moving their tail from side to side like a snake, sperms’ tails only lash to one side. While this would seemingly cause them to swim in circles, these cells instead rotate their bodies each time their tails lash to the side, thus propelling them in a spiral motion.

“We were not expecting to find what we found,” Hermes Gadêlha, head of the Polymaths Lab at University of Bristol and lead author on the study, told Smithsonian Magazine. “The aim of the project was ‘blue sky’ [or broad] research, to understand how sperm moves in three dimensions. And the result has completely changed the belief system that we have.”

So, how did it take us until 2020 to modify van Leeuwenhoek’s 17th century assumption? The primary reason that his sperm-model went undisputed for centuries was because researchers have continued to use 2D technology to view sperm. If you were to look at sperm under a modern microscope, you would probably make the same incorrect assumption about their movement that van Leeuwenhoek made. The depth that 3D imaging provided allowed researchers to see that the sperm’s body is spinning in a rotated motion, whereas in flat picture it looks like it’s simply moving its tail to each side.

Another problem that has existed for researchers, according to Gadêlha, is that sperm’s size and speed make them extremely difficult to observe closely. In fact, they can complete approximately 20 propulsions in less than a second. 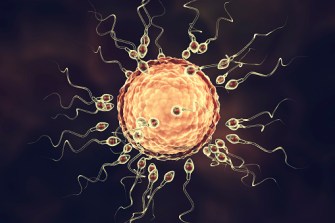 As this study highlights, what science reveals to us about the world is constantly in flux as our technology, cultural beliefs, and the questions we ask evolve. This discovery about sperms’ true movement builds upon a slew of recent studies that are radically challenging what we know about human reproduction. For example, it was long believed that the human egg had no active role when it came to its interaction with sperm. Earlier this summer, a study found that human eggs “choose” sperm by using a chemical signal to attract certain sperm. Last year, another study found that men’s sperm, when damaged, can play a larger role in recurrent miscarriages than previously thought.

While these cultural dynamics are interesting, this new study on sperms’ swimming techniques holds some practical implications as well. It could be useful for future research about the causes of male infertility. For example, we now have a better idea of mechanisms that underlie sperms’ incredible journey to an egg and that could help scientists understand why some sperm have a more difficult time making it there to successfully procreate.

A study finds that older adults who cannot balance on one foot for ten seconds have an 84% higher risk of death than those who can.
Up Next
The Present

Coding is not ‘fun’, it’s technically and ethically complex

It doesn’t help that Hollywood has cast the ‘coder’ as a socially challenged, type-first-think-later hacker, inevitably white and male.