Rebecca Meyer was diagnosed with glioblastoma when she was 5 years old. She fought bravely for 10 months before dying on her 6th birthday. The total cost of of her treatments during that time? $1,691,627.45.

Cancer is costly, emotionally and socially. But it’s especially pricey in terms of money. The stress of being unable to pay for treatment doesn’t help your immune system while going through chemotherapy or radiation. It’s impossible to relieve yourself of tension when your medical costs are bankrupting you and your family.

This is more common than you might imagine. A new study, published this month in The American Journal of Medicine, discovered that 42 percent of patients deplete their life savings during the first two years of treatment. There’s good reason the term “financial toxicity” is in the name of this report.

Of the 9.5 million cancer diagnoses studied between 2000–2012, researchers discovered that 42.4 percent of patients (median age 68.6±9.4 years) spent all of their money, averaging $92,098. This follows disturbing news from earlier this year that 40 percent of Americans can’t afford to pay $400 in case of an emergency. The math is not adding up.

Financial toxicity led Fumiko Chino to co-write a research letter in JAMA Oncology last November. After her husband surpassed his insurance policy’s $500,000 lifetime limit, Chino drained her savings to pay for his treatment. When he died, she was left hundreds of thousands of dollars in debt.

In her study of 300 cancer patients, Chino and team discovered that over one-third of them had to pay more than expected for their care, which put a strain on their decision-making process.

Facing unexpected treatment costs was associated with lower willingness to pay for care, even when adjusting for financial burden. This suggests that unpreparedness for treatment-related expenses may impact future cost-conscious decision making.

A 2016 systematic review of 45 studies, published in Journal of the National Cancer Institute, found that up to 62 percent of patients report being in debt due to treatment. Another study of over 4,700 patients from that year discovered that 55 percent accrued at least $10,000 in debt, while 3 percent filed for bankruptcy.

Cancer costs exceed $80 billion in America each year. Over half of all cancer patients “experienced house repossession, bankruptcy, loss of independence, and relationship breakdowns.” Up to 85 percent of patients have to stop working for up to six months, putting further strain on their finances. 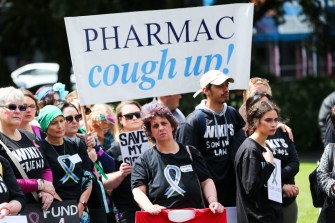 The financial toxicity study above comes to possibly the only conclusion imaginable:

As large financial burdens have been found to adversely affect access to care and outcomes, the active development of approaches to mitigate these effects among already vulnerable groups remains of key importance.

Health care remains one of the most important issues in this election cycle — it always seems to be an issue, sadly. Seventy-two percent of all political ads that ran in Washington during September mentioned health care in some capacity, while 50 percent of national ads run by Democrats have used this talking point (compared to 28 percent of national Republican campaigns). We need to figure this out.

As a cancer survivor, I deeply empathize with this problem. There is no easy answer, as cancer treatment is expensive. Funding is needed to keep researchers searching for cures and better treatments. Hospitals need to stay in business, and cancer happens to be one of the more expensive widespread diseases to treat.

But we’ve also set up our society in such a way that these high costs are passed on to those who can afford it least. This study is just one example of a culture that continues to divide its wealth to such extremes. That might not be the country we wanted, but it’s what we’ve got. Where we go from here is up to us, and a sizable piece of this puzzle will be put into place on November 6.

Tags
bankruptcycancercancer riskchemotherapyhealth carehealth care (industry)
In this article
bankruptcycancercancer riskchemotherapyhealth carehealth care (industry)
Related
Health
Want to live longer? You may need to move
Longevity gets a new motto: location, location, location.
Health
Helmet worn at home shrank man’s brain tumor by a third
The new brain tumor treatment targets a cancer that kills 75% of patients within a year.
Hard Science
Sky-mapping system can predict whether cancer treatment will work
Using image analysis tools developed for astronomy, researchers are predicting cancer therapy responses.
Neuropsych
“Laughing gas” may offer quick, long-lasting relief from depression
Laughing gas may be far more effective for some than antidepressants.
Health
We’re winning the war on cancer
As the American population grows, fewer people will die of cancer.
Up Next
The Present
7 brilliant Japanese words we need in English
Ever wanted to describe precisely how crummy you feel after a bad haircut?