“Sit up straight” is a command you likely grew up hearing from disgruntled parents ignorant of how child bodies could slouch at such obtuse angles. This directive has no doubt increased in the smartphone era, where extreme flexion in the upper back is poised to lead to an onslaught of kyphosis in older age. Then again, with parents also staring at their phones, pitching their heads forward at anatomically aggravating angles, who knows if they’re even paying attention to anyone else at the table.

Posture is important, not only for awareness. How we carry ourselves is mythological in stature: to be successful is to “hold one’s head up high,” whereas a life of suffering is certain to follow those who “hold the weight of the world on our shoulders.” Of course, this weight is in the hands, the eyes following the trajectory of the alternative reality on the screen. Postural habits have system-wide effects well beyond the chronic rounded thoracic spines we see on a daily basis.

Movement is also a system-wide activity, dependent upon the coordination of your brain and body as directed via your nervous system. But what about posture? Your “body schema” is the relationship between the seemingly disparate regions of your body, how they coordinate to move you around the world. Posture has long been subsumed into this schema. A research team based at Kavli Institute for Systems Neuroscience at Norwegian University of Science and Technology wanted to know if you could isolate posture from the rest of movement phenomenon.

How to Fix Thoracic Kyphosis | Rounded Upper Back Fix

So they recruited eleven rats to freely forage while hooked up to dual micro drives, which targeted their posterior parietal cortex (PPC) and front motor cortices. The researchers were attempting to understand if posture is independent of movement. Indeed, they seem to have found such so-called “posture cells,” as noted in a recent study published in Science.

“Postural tuning was thus expressed independently of movement, but not vice versa.”

The more common the posture the rats assumed, the less neurologically taxing these positions were. According to Jonathan Whitlock at the Kavli Institute, this is part of our body’s energy conservation system:

This is not exactly surprising. After 15 years of teaching fitness classes, students learning new motor patterns is physically and neurologically taxing. Simply putting one’s body into a lunge and raising their arms above their head or successfully swinging a kettlebell with proper form can takes week of focused effort. There is no brain/body split. Exhaustion occurs from recruiting one’s entire attentional faculties to the task at hand. 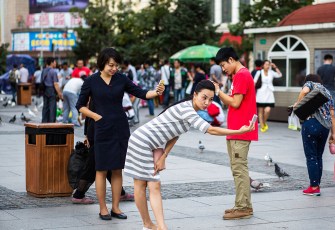 Tourists take selfies with all kinds of postures on a city square. (Photo by Zhang Peng/LightRocket via Getty Images)

What is more surprising is that posture itself is separate from movement. Of course, posture greatly affects movement. Return to the kyphotic tendencies of the thoracic spine (aka “rounded shoulders”). It might not be neurologically taxing to hold this position after spending hours a day for months or years in this position, but asking that same person to perform simple backbends by engaging underdeveloped lats, psoas, and abdominal muscles—all victims of over-sitting and too much phone time—is going to fire neurons that have been dormant far too long.

Another co-author of the study, Benjamin Dunn, believes this discovery can have profound effects on the future of technology:

“Knowing how the brain represents body schema could push the next generation of robots closer to human-like learning of movement and interaction.”

More importantly it can help us in the here and now. It doesn’t make much sense to create perfectly postured robots when the creators are hunchbacked and in pain. Old wisdom sometimes offers powerful knowledge. Those dinner table lessons have profound effects well beyond that nightly ritual. Perhaps we just need to listen.

For decades people have arranged to freeze their bodies after death, dreaming of resurrection by advanced future medicine. Many met a fate far grislier than death.
Health

Cycling – active transportation or death trap?
Up Next
Neuropsych

They’re at a higher risk for depression, weekend binge drinking, and unnecessary dieting.