Disease is part of the price we pay as biological organisms. Contemplating how many diseases we have not eradicated can be daunting, though in reality, since the discovery of vaccination in the late eighteenth century and widespread acceptance of germ theory in the nineteenth, researchers have made great strides in medicine. Formerly deadly diseases are now behind us.

Not every illness is easy to overcome, however. Cancer, as Siddhartha Mukherjee writes in his opus on the topic, is an inherent part of our biology; whether or not those cells get turned on is the grim game of change every one of us faces. Optimize all we like, the possibility is always lurking.

A disease we often overlook in this conversation due to its ubiquity is one most everyone has fallen victim to once (or many times) in their lives: influenza. The flu killed a record number of Americans in 2017-18: 80,000 citizens died that year, according to the CDC.

Even in an average year, the agency states that between 12,000 and 79,000 people die. Yet many more are struck ill—somewhere around nine million up to 50 million. That’s nearly one-sixth of the population during especially bad seasons. Globally, over 600,000 people die every single year. 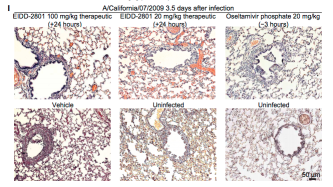 The flu isn’t one disease, but a family of viruses. Knowing which will strike in any given year requires educated guessing. (Since Australia experiences its season earlier than America, our flu shots are based on what happens across the planet.) Three of the four influenza viruses affect humans, though there is speculation that the fourth might also make us sick.

It doesn’t really matter which virus gets into your system. They’re all terrible, and, for the youngest and oldest among us, potentially deadly. Sadly, as with antibiotics, flu drugs are showing less efficacy, as the virus has developed resistance to a popular remedy, oseltamivir (commonly known as Tamiflu).

Hope springs eternal, however. A new study, published in the journal, Science Translational Medicine, is showing promise—in ferrets. Researchers at Georgia State University and Emory University teamed up to test N-hydroxycytidine (NHC) on those polecats; previous research on macaques didn’t go well: the medicine wasn’t effective in preventing or treating flu symptoms because their bodies couldn’t convert the drug.

This time, the researchers created a new compound, EIDD-2801, a minor tweaking of NHC. When the ferrets were infected with the flu and given a round of this new compound twelve hours later, not one of them got sick. Those given the drug a day after infection exhibited fewer symptoms than the control group or the group given Tamiflu.

Andrew Pavia, an infectious disease expert at the University of Utah, breaks it down:

“It’s important that they showed a reduction in symptoms in ferrets, because it gets much closer to predicting what happens in people. It’s a major step towards developing a drug for humans.”

Ferrets are not people, of course, so efficacy and dosage are up for debate. But it’s an important potential breakthrough. The team writes,

“In conclusion, our data identify EIDD-2801 as a promising clinical candidate for monotherapy of seasonal and pandemic influenza. Although SI values defined by the human airway epithelia model are encouraging and no gross signs of toxicity were observed in the corresponding ferret efficacy studies, formal two-species multiday toxicity and adverse event testing will determine first-in-human dose concentrations.”

Trials on humans are likely to begin next spring, so we’ll have to make due with Tamiflu and that old cure-all, sleep and hydration, for a bit longer. Of course, getting your flu shot as soon as possible is also a good idea. Regardless of this season, this new research is an advancement in treating one of the world’s most common diseases. Over a half-million lives every year depend on such a development.

Tags
biologyhealthhuman bodyillnessVaccinesvirus
In this article
biologyhealthhuman bodyillnessVaccinesvirus
Related
Health
New blood types are often discovered following medical disasters
New blood types are regularly discovered by an unusual absence or an unusual presence — both of which can result in tragedy.
Neuropsych
How you breathe affects your brain
Your breathing rhythm influences a wide range of behaviors, cognition, and emotion.
Health
COVID, RSV and the flu: A case of viral interference?
Viruses, it turns out, can block one another and take turns to dominate.
Neuropsych
Shopping with your nose: How body odors influence your buying behavior
Sniffing out a deal.
The Past
Ceramics, corn cobs, and other strange things we used before toilet paper
Some objects were softer than others.
Up Next
Health
Students develop door handles that kill bacteria
After living through a terrible epidemic, two inventors have created a self-cleaning door handle.