There’s an ongoing joke among members of Gen X that our mothers smoked cigarettes and drank alcohol while pregnant and we turned out just fine. Well, sort of. Research has shown that obesity levels among my peers are not great. Mental health issues are also on the rise. Of course, this cannot be pinned on maternal habits—we can’t blame everything on our parents—though a new study shows it plays a role.

Washington State University professor Min Du and his PhD student, Jun Seok Son, discovered that female mice that exercised had healthier offspring than mothers that got no wheel time. Offspring of the exercising mothers group are less likely to grow obese and exhibit better metabolic health.

Exercising while pregnant stimulates the production of brown adipose tissue, otherwise known as brown fat. Its primary function is thermoregulation; fans of Dutch athlete Wim Hof are well aware that he has an inordinate amount of brown fat, which is in part why he can thrive in freezing ice baths, meditate in subzero temperatures, and scale Mt Kilimanjaro wearing only shorts.

Newborns have a lot of brown fat, as do hibernating mammals. This tissue decreases as we age. Brown fat is much healthier than white fat; we don’t want to carry the latter around. Whereas the accumulation of white fat leads to all of the metabolic and cardiovascular issues we associate with obesity, brown adipose tissue activation has been shown to promote bone health and density; increase levels of irisin, which helps build lean muscle mass; improve insulin sensitivity; and aid in longevity by increasing levels of the protein hormone adiponectin.

Du and Son’s study might be the first to display the possible benefits of exercising while pregnant. Previous research has linked maternal obesity to infants. This study shows the benefits of exercise, one of which is better glucose tolerance, meaning children have a reduced likelihood of developing type 2 diabetes. Son says,

“These findings suggest that physical activity during pregnancy for fit women is critical for a newborn’s metabolic health. We think this research could ultimately help address obesity in the United States and other countries.”

Still, myths perpetuate regarding the efficacy of exercising while pregnant. According to NYU OB-GYN, Jennifer Aquino, as long as women stay hydrated while working out, they are unlikely to experience ill effects. Overheating is a major concern, however. Avoid exercise in hot environments. Eating a snack before working out is also a good idea.

The current guidelines for exercising while pregnant are similar to everyone else: 150 minutes of moderate level fitness, split between cardiovascular and strength training. Pregnant women generally want to choose low impact options, such as swimming and indoor cycling. Of course, every woman’s approach should be tailored to meet their needs and pre-pregnancy fitness levels. 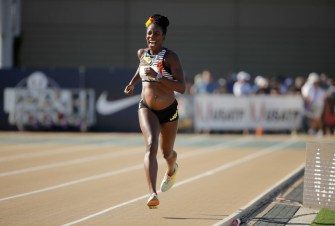 Alysia Montano runs in the Women”s 800 Meter opening round during Day 1 of the 2017 USA Track & Field Championships at Hornet Stadium on June 22, 2017 in Sacramento, California.

As a general guideline, my advice as a fitness instructor (who has taught hundreds of pregnant women over the last 16 years) has been to keep up their regimen as best they can, provided they are healthy enough to do so and with modifications. I don’t advise learning anything new during this time as that could increase their risk for injury. If an expecting mother does want to engage in new exercise routines, medical professionals advicse slow adoption.

Again, anecdotally, I’ve seen a range of responses. Some women choose to scale back their routines or even stop working out if adverse reactions begin (usually causing them to take bed rest). I’ve also seen one instructor friend teach kickboxing and perform handstands while nine months pregnant. I even had a woman in her fortieth week take my class to try to “get the baby out already.” (He was born the next day, though I take no credit for that.)

It should not surprise anyone that healthier mothers have healthier babies. We are well aware of the genetic consequences of our parents that we pass to our offspring. We also know well the behavioral imprints our forebears leave on us. A guy named Freud wrote a few books about that. Of course, parental behavior affects our development in every capacity, fitness levels included. Thanks to this team in Washington, we have proof.

The remote-learning response to COVID-19 is remarkable. It also highlights a problem.

We know what effective teaching looks like. Implementing it can change the lives of Americans.