We know timing is everything, but does everything rely on timing? When it comes to when you exercise, the answer might be yes.

Two complementary studies were recently published in the journal Cell Metabolism, detailing the relevance of circadian rhythm on exercise. Both studies relied on mice huffing it on treadmills (along with a dozen human counterparts in one of the studies). Both presented an optimal time of day to exercise. The problem is, each study claims a different time.

In the first, mice were put on varying cardio protocols at different times of day. “Mouse evening” is different than “human evening” since rodents are nocturnal. According to this research, evening appears to be the best time of day for exercise efficiency.

The team, led by Dr. Gad Asher in the Department of Biomolecular Sciences at the Weizmann Institute of Sciences, focused on skeletal muscle. They discovered higher levels of post-workout ZMP during mouse evening, affording the rodents an increased exercise ability. When 12 humans were tested in a similar manner the result was the same. As the team writes,

“The distinct daytime and exercise-type transcriptomic and metabolic signature in skeletal muscle point toward a difference in nutrient utilization and metabolic pathway activation, in particular, fatty acid oxidation and glycolysis.”

Asher believes this offers a leg-up on those that hit the treadmill in the evening, noting that ZMP is “an endogenous analog of AICAR [aminoimidazole carboxamide riboside], a compound that some athletes use for doping.” Apparently, our internal alarm clock offers access to our inner pharmacy at different times.

Morning vs Evening | Best Time of Day to Workout

Morning vs Evening | Best Time of Day to Workout

Not so fast, says Dr. Paolo Sassone-Corsi at the Center for Egpigenetics and Metabolism at UC Irvine. His team also investigated the effects of circadian regulation on metabolism. He says that by the end of the study his team looked out a much different time window.

“Using mice, we compared the impact of exercise on the skeletal muscle metabolism at different times of day. We discovered that exercising at the correct time of day — around mid-morning — results in more oxygen in the cells and a more rejuvenating effect on the body.”

Sassone-Corsi measured changes in muscle tissue as they related to glycolysis and lipid oxidation. The key component was a transcription factor, HIF-1α, and its role in exercise efficiency. Homing in on this particular process offered another perspective.

Specifically, Sassone-Corsi says that our bodies utilize carbohydrates and ketone bodies better during a late morning workout; we also break down fats and amino acids more efficiently during this phase.

While both studies involve circadian rhythms, Sassone-Corsi admits that mice living in a laboratory experience reality differently than humans. Physiological differences between an early rising human and a night owl signify varying optimal times of day for pretty much everything, workouts included. If you’re not accustomed to hitting the gym at the break of dawn, it is unlikely that a 6 a.m. session will be better when compared to your normal evening regimen. 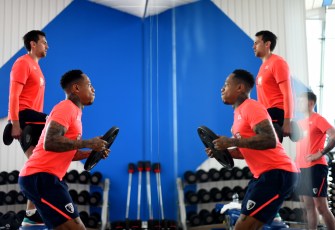 In my experiences, there are advantages to both. In the morning (my personal preference, being an early riser), exercise wakes you up and prepares you for the day ahead. I notice a qualitative difference between getting on my laptop on days when I work out first compared to when I do not.

Other benefits of a morning routing include:

Yet evening exercise also has advantages. For example, your body is more limber, having moved around all day; hitting the yoga mat first thing in the morning can be torturous. The wash of chemicals after an evening session sets you up for a restful sleep. Other research suggests that evening workouts allow you to blow off steam from your day while also increasing the intensity of your session. Strength and flexibility are highest in evening.

The answer to the optimal workout time appears to be: it depends. Like diet, exercise programs are individual. Experience and habitual patterns must be factored in. The most important takeaway from these studies is the fact that exercising at any time of the day is better than not exercising at all. Whatever your movement protocol, that you have one is the most important factor.

What does this mean for economies?