While glaucoma has been the butt of many well-intentioned, wink-wink weed jokes for decades, the disease is quit serious. In fact, glaucoma is the leading cause of blindness in people above sixty. Glaucoma is insidious as well. Abnormally high pressure in your eyes gradually damage the optic nerve.

Vision loss is subtle until it reaches advanced stages, by which point there is little chance of slowing damage. By this point prevention is impossible.

It begins with patchy spots in your vision, mostly in the periphery or central vision. By the time glaucoma is in latter stages, tunnel vision results. Deterioration of the optic nerve is irreversible. Some treatments mitigate damage by lowering eye pressure, such as laser treatment and eye drops.

And, of course, there is marijuana, which does, in fact, lower eye pressure — specifically, THC lowers it. But there are trade-offs. Unlike other treatments, marijuana’s effects last 3–4 hours, meaning you need to smoke continuously throughout the day. While pressure is reduced, the constant smoke creates other problems.

However, a new study out of Indiana University reveals that marijuana, specifically cannnabidiol (CBD), can make glaucoma worse.

The study, published in Investigative Ophthalmology & Visual Science on December 14, found that CBD — one of the hottest and, as I’ve previously written, suspect health trends being shoved into every product imaginable at a premium — actually creates a rise in eye pressure, the exact opposite effect a glaucoma sufferer desires.

This study raises important questions about the relationship between the primary ingredients in cannabis and their effect on the eye. It also suggests the need to understand more about the potential undesirable side effects of CBD, especially due to its use in children.

As mentioned, THC indeed lowers eye pressure, which has been the mechanism by which treatment has been administered thus far. The problem is, according to Straiker’s research, CBD blocks the pressure-reducing effects that THC offers. 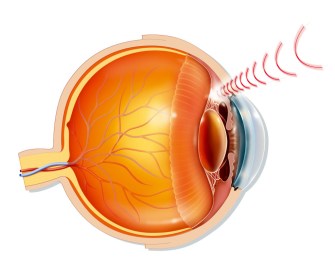 Illustration of glaucoma treatment using ultrasound. The ultrasound beams enable the ciliary body, the gland which produces aqueous humour, to coagulate, reducing the secretion long-term. The optic nerve is no longer under pressure, sight is maintained. Image source: BSIP / UIG via Getty Images

Which makes the science even more paradoxical and troubling for patients: CBD is being advertised as the non-psychoactive wunder drug counterpart to THC, which is what makes you high. Those who crave the benefits of marijuana without the fuzzy feeling find relief in CBD oils, tinctures, and creams. These, however, apparently will not help those with glaucoma because its greatest bioavailability comes from smoking.

It should be noted that this study was conducted on 18 mice. Interestingly, female mice were less affected by THC, which also has implications for marijuana’s role in treating glaucoma. More research will have to be conducted on humans, but as Straiker concludes, this research offers new avenues of inquiry.

There were studies over 45 years ago that found evidence that THC lowers pressure inside the eye, but no one’s ever identified the specific neuroreceptors involved in the process until this study. These results could have important implications for future research on the use of cannabis as a therapy for intraocular pressure.

Stem cell-derived chondrocytes could be the key to regenerating damaged cartilage.
Neuropsych

Isolation experiment: What’s it like to live in a cave for 40 days without a clock?

This article was originally published on our sister site, Freethink. Fifteen volunteers in France just spent more than a month living in a cave — without any way to tell time — […]

Humanity’s most advanced tech still hasn’t unraveled the mysteries of the human mind. Can brain scans show us how we store memories?
▸
with
Lisa Genova
Neuropsych

Why are some people more curious than others?

When we satisfy our curiosity, the brain has a particular way of rewarding us.
Up Next
The Present

Why not all uncivilized people are barbarians

Oppression causes many people to run for the hills. Literally.