In his new book, The Body: A Guide for Occupants, Bill Bryson writes that during the initial stages of the technological revolution in the nineteenth century, medicine was moving backwards. Just as industrious civilizations were pushing boundaries in machinery, the understanding of biological machinery devolved. He writes,

“Until well into the nineteenth century most doctors approached diseases not as distinct afflictions, each requiring its own treatment, but as generalized imbalances affecting the whole body.”

The humors were still considered real; bloodletting remained common even as death rates soared. Not until the twentieth century did the age of specialization take hold. Yet in many ways we seem to have overcorrected. Doctors and researchers became so fascinated on singular trees that they completely forget the interconnected nature of the forest.

As the gut microbiome is increasingly being implicated in mental health issues, we’ve had to reassess our understanding of mental health. We’re now well aware how an inflamed digestive system throws your mental and emotional state out of balance. In that light, perhaps it should be unsurprising that a new study, published in the Journal of Neurology, Neurosurgery, and Psychiatry, has found that anti-inflammatory medication is seeing success in treating major depression.

How inflammation in the body could be causing depression

How inflammation in the body could be causing depression

Inflammation is the body’s response to a wide range of irritants and stress. When you cut yourself, the red region around the laceration is thanks to cytokines rushing in to defend the region, destroying bacteria before they spread. Yet it’s not only a cut that send cytokines flooding into a region. Inflammatory diets, such as those high in carbohydrates and sugars, can keep your body in a constant state of inflammation—and inflammation has been linked to depression, as well as immune functioning, sleep, impulse control, and overall mood.

In fact, this is not the first study making this connection. Researchers were looking into the connection between anti-inflammatories and depression for at least five years.

For this meta-analysis, the group of researchers from China looked at 30 randomized controlled trials that included 1,610 participants. Of these, 26 suggested that a variety of anti-inflammatory agents, including NSAIDs, cytokine inhibitors, statins, and omega-3 fatty acids, reduced depressive symptoms better than placebos. They write,

“The overall analysis of 30 RCTs suggested a significant antidepressant effect of anti-inflammatory agents in comparison with placebo for patients with MDD in various efficacy outcomes. A significantly larger reduction in depressive rating scales was found in the intervention group, with moderate heterogeneity among studies. Similarly, the response and remission rates were significantly higher for patients taking anti-inflammatory drugs with low heterogeneity.” 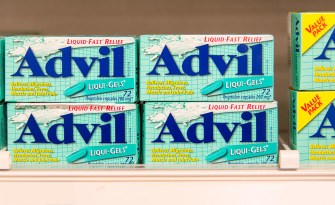 With an increasing number of mental health conditions afflicting humans, and with lackluster results from the common course of treatment, SSRIs—which, over the long-term, have a tendency to negatively affect the microbiome—new courses of treatment are necessary. The group of researchers from China concluded that the anti-inflammatory agents studied are “reasonably safe.”

Of course, we also must question the advice of taking anti-inflammatory in certain situations, such as a means for countering a high-inflammatory diet. In such cases, the best advice would be to look for the root cause of the issue, and we know that there are links between depression and anxiety and diet. Medications should never take the place of better lifestyle decisions.

Diet is not the only cause of inflammation, although it has become an increasingly problematic one. Dependent upon condition, anti-inflammatory agents could be a relatively safe line of defense for both problems with inflammation and in the treatment of depression. More research is needed, but it’s a solid start.

New research suggests they may be in the connections between your brain cells.
Up Next
The Present

The campaign promise could only become law if the Labour Party wins the general election in December.