Americans are being asked to sacrifice a lot right now. Shelter at home orders are in place to help limit the number of elderly and high-risk citizens flooding into hospitals, which overwhelms the health care system. It’s not that we aren’t feeling the pain. Over 26 million Americans have filed for unemployment in a mere five weeks. There are reasons for our sacrifices, yet that doesn’t make them any easier to bear.

Which leads to another question of sacrifice: Would you be willing to be infected with COVID-19 as part of an early-stage vaccination trial? For nearly 1,500 healthy, young citizens, that answer is yes.

Naturereports that roughly that number of Americans signed up for 1Day Sooner, early-stage research that could potentially speed up the vaccination process, which typically takes 12-18 months. Known as a human-challenge trial, volunteers would be infected so that researchers could test vaccines and treatments—basically, a rushed clinical trial, with everyone well-informed of the stakes.

1Day Sooner co-founder, Josh Morrison (whose organization is not funded by companies working on a coronavirus vaccine), is pre-qualifying volunteers now in case human-challenge trials are coming down the pipeline. He’s hoping that this enthusiasm will help inspire politicians and public policy experts to expedite the testing process. Being a high-risk endeavor, Morrison believes the payoff could be even bigger.

“Many note that they recognize the risk but believe the benefits of vaccine acceleration are so tremendous that it is worth it to them.”

1Day Sooner isn’t the only organization looking for a vaccine. Two volunteers were just injected with COVID-19 as part of a study at Oxford—the first of over 800 people that have signed off on being tested.

Meanwhile, volunteers at Kaiser Permanente’s Vaccine Treatment and Evaluation Unit in Seattle are undergoing their second round of vaccination trials. That study began on March 16.

Hong Kong’s CanSino Biologies, in partnership with the Beijing Institute of Biotechnology, has also just entered phase 2 of their clinical trials.

Clinical trials at Beth Israel are planned to launch in September, with companies such as Johnson and Johnson dedicating $1 billion to this research.

The World Health Organization announced its Solidarity Trial, with over 100 countries participating in an effort to identify effective treatments as soon as possible. All told, the WHO announced six coronavirus trials that are currently underway, with over 70 planned around the world. 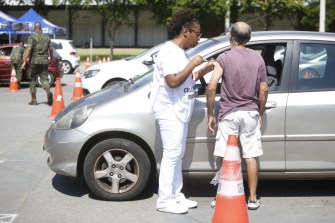 A red cross nurse applies a vaccine during a drive thru influenza vaccination operation at Riocentro on March 26, 2020 in Rio de Janeiro, Brazil. This vaccination does not prevent against the coronavirus (COVID-19), but helps the most vulnerable from other diseases.

A human-challenge trial, such as the one being proposed by 1Day Sooner, is not without potentially deadly consequences. Nir Eyal, director at the Center for Population-Level Bioethics at Rutgers University, recently said that human-challenges are not uncommon. They’ve been conducted on cholera and malaria. COVID-19 is a bit different, given its novelty. While we don’t know the extent of damage of this virus, overall he thinks such trials are worth the risk.

“The main attraction is that they could greatly accelerate the time to approval and potential use. The thing that takes the longest time in testing vaccines is phase III efficacy testing. That’s done on many, many people, some of whom get the vaccine and some of whom get placebos or competing vaccine candidates. Researchers then look for differences between these two groups in infection rates.”

Making a sacrifice is always a gamble, yet it points to the importance of a collectivist mindset: It’s not just about you, but everyone. These volunteers deserve a lot of respect for their service.

Tags
clinical trialsCOVID-19Covid-19 medicineCOVID-19 testingvaccine designVaccines
In this article
clinical trialsCOVID-19Covid-19 medicineCOVID-19 testingvaccine designVaccines
Related
Health
COVID and “gain of function” research: should we create monsters to prevent them?
Gain-of-function mutation research may help predict the next pandemic — or, critics argue, cause one.
The Past
Benjamin Franklin on vaccination and a deadly virus outbreak
Smallpox was nothing new in 1721.
The Present
Not just COVID: mortality rates are up from homicides, drug overdoses, accidents
Some of these trends may be due, in part, to the lockdown.
Thinking
Is it ethical to pay people to get vaccinated?
It could lead to a massive uptake in those previously hesitant.
Health
How Pfizer and BioNTech made history with their vaccine
How were mRNA vaccines developed? Pfizer’s Dr Bill Gruber explains the science behind this record-breaking achievement and how it was developed without compromising safety.
▸
7 min
—
with
Pfizer
Up Next
Strange Maps
19th-century atlas offers glimpse of North Sea’s fish-rich past
O.T. Olsen’s gorgeous ‘Piscatorial Atlas’ (1883) describes a world now destroyed and forgotten