The pharmacological revolution began with tranquilizers. Miltown was the country’s first “blockbuster” drug. Touted for relieving everything from skin problems and stomach distress to lack of focus and social anxiety—and, of course, “the blues”—tranquilizers were the first psychiatric pills to widely infiltrate a country that, for the first time in its history, had expendable income and leisure time.

By 1971, 15 percent of Americans had taken a minor tranquilizer. Two years later, 104 million prescriptions were written. Incredibly, this was 11 years after the Kefauver-Harris Amendments, which required doctors to specify a disease when treating mental health issues. They could no longer market cures for general disease, such as feeling “blah” (an actual complaint). This law meant the medical industry had to invent diseases in order to sell pills, and it certainly rose to the occasion.

Unlike diabetes or cancer, which appear in blood samples, depression is subjective. The chemical marker often used, serotonin, is correlated to troublesome mental health. Serotonin doesn’t cause the blahs. Decade after decade, however, we’ve been marketed the idea that chemical imbalance is the culprit behind depression. As a new study, published in Journal of Affective Disorder, shows, as the language of clinical neuroscience replaces the vocabulary of psychotherapy, patients’ outcomes worsen.

A team based at McLean Hospital, Harvard Medical School’s largest psychiatric facility, wanted to understand the impact of neurobiological and genetic terms being used to describe mental illness. Does the language we use affect treatment protocols and patient expectations? According to their study, the answer is yes.

The narrative of serotonin imbalance has been challenged for decades. As Joseph E. Davis describes in his book, “Chemically Imbalanced,” the 1994 update of the psychiatric bible, DSM-IV, offered peak brain depletion rhetoric. Then the theory found a cliff.

“In the years following, the validity of the DSM categories, along with the depletion hypothesis and other notions of ‘chemical imbalance’ would come to be largely rejected in psychiatry.”

This is a far cry from Howard Rusk’s 1947 NY Times editorial calling for mental health disorders to be treated similarly to physical disease (such as diabetes and cancer). This mindset—not attributable to Rusk alone; he was merely relaying the psychiatric currency of the time—has dominated the field for decades: mental anguish is a genetic and/or chemical-deficiency disorder that must be treated pharmacologically.

Even as psychiatry untethered from DSM categories, the field still used chemistry to validate its existence. Psychotherapy, arguably the most efficient means for managing much of our anxiety and depression, is time- and labor-intensive. Counseling requires an empathetic and wizened ear to guide the patient to do the work. Ingesting a pill to do that work for you is more seductive, and easier. As Davis writes, even though the industry abandoned the DSM, it continues to strive for a “brain-based diagnostic system.”

That language has infiltrated public consciousness. The team at McLean surveyed 279 patients seeking acute treatment for depression. As they note, the causes of psychological distress have constantly shifted over the millennia: humoral imbalance in the ancient world; spiritual possession in medieval times; early childhood experiences around the time of Freud; maladaptive thought patterns dominant in the latter half of last century. While the team found that psychosocial explanations remain popular, biogenetic explanations (such as the chemical imbalance theory) are becoming more prominent.

Interestingly, the 80 people Davis interviewed for his book predominantly relied on biogenetic explanations. Instead of doctors diagnosing patients, as you might expect, they increasingly serve to confirm what patients come in suspecting. Patients arrive at medical offices confident in their self-diagnoses. They believe a pill is the best course of treatment, largely because they saw an advertisement or listened to a friend. Doctors too often oblige without further curiosity as to the reasons for their distress. 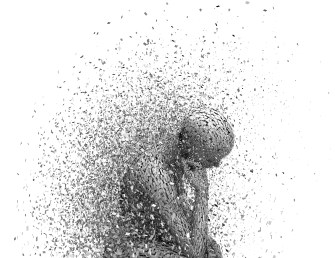 While medicalizing mental health softens the stigma of depression—if a disorder is inheritable, it was never really your fault—it also disempowers the patient. The team at McLean writes,

“More recent studies indicate that participants who are told that their depression is caused by a chemical imbalance or genetic abnormality expect to have depression for a longer period, report more depressive symptoms, and feel they have less control over their negative emotions.”

Davis points out the language used by direct-to-consumer advertising prevalent in America. Doctors, media, and advertising agencies converge around common messages, such as everyday blues is a “real medical condition,” everyone is susceptible to clinical depression, and drugs correct underlying somatic conditions that you never consciously control. He continues,

“Your inner life and evaluative stance are of marginal, if any, relevance; counseling or psychotherapy aimed at self-insight would serve little purpose.”

The McLean team discovered a similar phenomenon: patients expect little from psychotherapy and a lot from pills. When depression is treated as the result of an internal and immutable essence instead of environmental conditions, behavioral changes are not expected to make much difference. Chemistry rules the popular imagination.

Many years ago, my best friend tried to quit smoking. He asked for help. While I’m no addiction expert, I offered what I knew from my fitness toolkit: breathing exercises and cardiovascular training, methods for strengthening his body and mind that could, I hoped, inspire him to take better care of himself in general. He replied, “No, I meant something like a pill.”

A few years later, he quit for good. After failing the cold turkey method a number of times, it finally stuck. Maybe it was watching his children grow up—the reason my parents quit when I was young. This method is not easy, however. It challenges you; it forces you to confront your demons; it drastically affects your brain chemistry. Yet, in the long run, it sometimes works.

Sometimes pills work, too. But often they do not. The journalist Robert Whitaker, author of “Anatomy of an Epidemic,” discussed the clinical trial process during our recent conversation. While the FDA process appears thorough from the outside, pharmaceutical companies only need to prove that a drug works better than placebo, not that it works for the most amount of people. He continues,

“Let’s say you have a drug that provides a relief of symptoms in 20 percent of people. In placebo, it’s 10 percent. How many people in that study do not benefit from the drug? Nine out of 10. How many people are exposed to the adverse effects of the drug? 100 percent.”

Even though some pharmacological interventions show little efficacy, and even though Xanax, an addictive and destructive benzodiazepine that only showed short-term (four weeks) efficacy in clinical trials, is being prescribed for many months and years, doctors continue to use the language of clinical neuroscience to describe mental health issues. If chemistry is the problem, people will turn to chemistry for the solution.

Perhaps we should, as psychiatrist Dean Schuyler writes in a 1974 book, recognize that most depressive episodes “will run their course and terminate with virtually complete recovery without specific intervention.” The problem is that idea isn’t profitable. As long as the gatekeepers continue to use the language of chemical imbalances to describe what for many is just an episodic case of the “blahs,” we’ll continue creating more problems than we solve.

Scientists May Have Just Found The Youngest Neutron Star Ever