The patron saint of nerds everywhere, Carl Sagan was an awesome human being. He wrote and hosted Cosmos, helped select the playlist of the Voyager Golden Records, had a distinguished academic career, and inspired both Bill Nye and Neil deGrasse Tyson to become the science educators they are today

Sagan wrote on a wide variety of topics, including astronomy, the need for truth in public discourse, world peace, and climate change. His brilliance is evident even in articles outside his area of expertise, and his insights are often quite meaningful.

One issue that he was forced to write on anonymously is now becoming a subject of debate across the world. Carl Sagan’s ideas on marijuana are a valuable addition to the discussions over how the drug can be used properly and as a case study on how a person who uses it sparingly won’t necessarily decay into a stoned couch potato.

Why did Carl Sagan write an essay on weed?

In an essay written for the 1971 book Marihuana Reconsidered, Dr. Sagan, writing under the pseudonym “Mr. X” described his history of marijuana use and how he thought it had been a positive force in his life. He wrote under a false name out of fear that he would negatively impact his career and reputation by writing such an article, and it was only after his death that we found out that he had written this essay.

The essay is too long to include here, but can be found in its entirety here or downloaded as a PDF here. We’ll focus on the major points he brings up.

Is Marijuana Legalization a Huge Win for Civilization? With Jason Silva.

How did he think it helped him?

Sagan argues that his marijuana usage positively impacted several facets of his life. He explains that he was introduced to the drug at a time when he was beginning to branch out from doing nothing but science and was especially open to new experiences. He found the drug to be pleasant and was attracted to it in large part because of the seeming lack of negative physiological effects.

As a result of altering his consciousness by smoking marijuana, he alleged that many things that he was previously unable to appreciate or notice became available to him even when he sobered up. He found the drug to be extremely useful in helping him understand people who he would usually write off as mad, as he describes here:

“A sense of what the world is really like can be maddening; cannabis has brought me some feelings for what it is like to be crazy, and how we use that word ‘crazy’ to avoid thinking about things that are too painful for us. In the Soviet Union political dissidents are routinely placed in insane asylums. The same kind of thing, a little more subtle perhaps, occurs here: ‘did you hear what Lenny Bruce said yesterday? He must be crazy.’ When high on cannabis I discovered that there’s somebody inside in those people we call mad.”

In addition, it helped him to better understand himself:

“When I’m high I can penetrate into the past, recall childhood memories, friends, relatives, playthings, streets, smells, sounds, and tastes from a vanished era. I can reconstruct the actual occurrences in childhood events only half understood at the time. Many but not all my cannabis trips have somewhere in them a symbolism significant to me which I won’t attempt to describe here, a kind of mandala embossed on the high. Free-associating to this mandala, both visually and as plays on words, has produced a very rich array of insights.”

He found that the drug was able to help him understand art and music in ways he had never been able to before:

“The cannabis experience has greatly improved my appreciation for art, a subject which I had never much appreciated before. The understanding of the intent of the artist which I can achieve when high sometimes carries over to when I’m down. This is one of many human frontiers which cannabis has helped me traverse… A very similar improvement in my appreciation of music has occurred with cannabis. For the first time I have been able to hear the separate parts of a three-part harmony and the richness of the counterpoint. I have since discovered that professional musicians can quite easily keep many separate parts going simultaneously in their heads, but this was the first time for me.”

He also thought it dramatically improved his sex life, as he analytically explains here:

“Cannabis also enhances the enjoyment of sex on the one hand it gives an exquisite sensitivity… the actual duration of orgasm seems to lengthen greatly, but this may be the usual experience of time expansion which comes with cannabis smoking.”

Lastly, he argues for outright legalization in light of these benefits:

“The illegality of cannabis is outrageous, an impediment to full utilization of a drug which helps produce the serenity and insight, sensitivity and fellowship so desperately needed in this increasingly mad and dangerous world.”

Sam Harris: Can Psychedelics Help You Expand Your Mind?

Was he alone in his views on drugs among other academics?

His view on marijuana is similar to the view of Aldous Huxley on harder psychedelics. Both men thought that psychotropic drugs could change our perception from our usual, survival-oriented mode to one that allows for a unique sensory perception and reflective thought patterns which both society and our psychology are structured to keep at bay. Huxley wrote an entire book, The Doors of Perception, on this phenomenon which he called the “Mind at Large.” 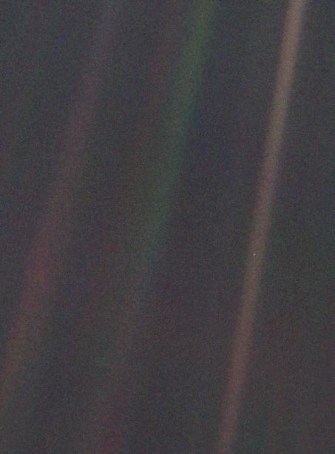 The famous Pale Blue Dot photograph of Earth taken by the Voyager spacecraft. Imagine if Sagan’s famous lecture on the image—one of the most famous passages in popular science—was influenced by his drug use…

Did Sagan’s drug use affect his work?

Yes, but he thought it was for the better. He claimed that one high lead to:

“…an idea on the origins and invalidities of racism in terms of Gaussian distribution curves. It was a point obvious in a way, but rarely talked about. I drew the curves in soap on the shower wall, and went to write the idea down. One idea led to another, and at the end of about an hour of extremely hard work I found I had written eleven short essays on a wide range of social, political, philosophical, and human biological topics… I have used them in university commencement addresses, public lectures, and in my books.”

He also argued that it allowed him to better understand social issues, which he began to comment on more frequently in his later years. Though it must be noted that he didn’t list any specific instances in his article of any great ideas devised while high. We can only take him at his word.

Of course, these supposed benefits took place because of his temperance and skepticism to the idea that every highdea was brilliant. This means that you shouldn’t think that you’re going to be the next big thing in science education just because you smoke a joint. Sagan’s endorsement also doesn’t negate the adverse side effects of the stuff that comes along with heavy usage; such as reduced motivation, memory issues, and an inability to create long-term plans.

As marijuana becomes increasingly legal, accepted, and commonplace we will have to answer questions about what it can do for us, both good and bad. While individual accounts should always be viewed with caution, the input of as intelligent a smoker as Carl Sagan is a valuable addition to any discussion on the subject.

Tags
consciousnessmarijuanamemorymusicnarcoticspsychologyscience and artselfsenses
In this article
consciousnessmarijuanamemorymusicnarcoticspsychologyscience and artselfsenses
Related
Sponsored
What childhood “money story” is shaping your financial behaviors?
Here are the signs that you inherited “money anxiety” from your parents.
Neuropsych
The most common source of awe might surprise you
It’s us.
How to fix your money trauma
Do you remember feeling “money shame” for the first time?
▸
7 min
—
with
Dr. Brad Klontz
Neuropsych
Psychology studies that go viral are likelier to be bogus
A new 20-year analysis of over 14,000 psychology studies finds that a study’s media coverage is negatively linked to its replicability.
The Learning Curve
Why do high IQ people stagnate in their careers? Emotional intelligence
Research suggests that emotional intelligence is more vital for success than IQ.
Up Next
The Present
Saudade: the untranslatable word for the presence of absence
Saudade: the untranslatable Portuguese word that names the presence of absence and takes melancholy delight in what’s gone.