A new report from the Alzheimer’s Association forecasts a looming health-care problem: The number of Americans with Alzheimer’s disease is expected to double by 2050, and unless things change, there will be a severe shortage of health-care professionals able to care for these dementia patients.

There are two key factors driving the problem: an aging U.S. population and a lack of health-care professionals trained to care for Alzheimer’s patients. There are currently about 5.8 million Americans ages 65 and older living with Alzheimer’s disease, which is about 10 percent of that age cohort. By 2050, that number is expected to hit 13.8 million. This surge poses a problem, given that the U.S. health-care system already struggles to treat people with Alzheimer’s and other forms of dementia.

“According to the National Center for Health Workforce Analysis, there was already a shortage of geriatricians in 2013, and although a modest increase in supply was projected by 2025, it was not expected to meet demand,” the report states. “As a nation, we need to triple the number of geriatricians who were practicing in 2019 to have enough geriatricians to care for those 65 and older who are projected to have Alzheimer’s dementia in 2050.”

A broad array of practitioners help to treat Alzheimer’s, including physicians, nurses, neuropsychologists, and allied health care professionals such as occupational and physical therapists and home health aides, the report notes. Primary care physicians are generally considered to be on the “front lines” of treating and diagnosing the disease. But over-relying on primary care physicians comes with costs. 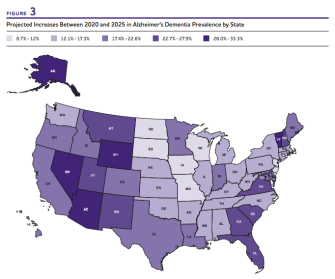 What’s especially alarming is that some primary care physicians aren’t comfortable being on the front lines. The survey found that 39 percent of PCPs reported “never or only sometimes being comfortable personally making a diagnosis of Alzheimer’s or other dementias.” That’s a problem, considering Alzheimer’s treatments are more beneficial if the disease is diagnosed early. 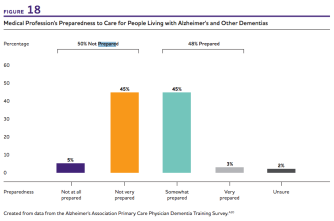 The Alzheimer’s Association notes that an early diagnosis allows patients the option to start taking medication for symptoms, make lifestyle changes, and participate in clinical trials. What’s more, diagnosing Alzheimer’s as early as possible would likely save the U.S. trillions in medical and long-term care costs for the degenerative disease, which can cause memory loss, cognitive impairment, hallucinations, and eventually death.

So, how can the U.S. prepare for the influx of Alzheimer’s patients, besides continuing to search for a cure? The Alzheimer’s Association report recommended several policy strategies that could help meet future demand:

Explore the key highlights from the UN’s latest release of its world population estimates.
Up Next
The Past

Ever had trouble finding reason to get out of bed? Marcus Aurelius has some advice for you.