Today’s rate of technological change is as unprecedented as it is unpredictable. This speed of innovation has created medical marvels that improve and save lives. Other technologies, however, have proven more difficult for physicians and patients alike to integrate successfully into health care practices.

“Exhibit A is the electronic health record (EHR), which has made the blood of countless physicians boil with frustration,” writes Michael Dowling, president and CEO of Northwell Health, in his book Health Care Reboot. Created to store, track and share patient records, “[t]he EHR can be a cruel taskmaster, demanding a doctor’s attention during a patient visit and requiring numerous clicks to enter even basic data.”

Physicians spend an average of six hours per workday logging clinical data into the EHR—and face-time with patients suffers. The average doctor-patient consultation clocks in at 18 minutes, and a fair amount of that time goes to logging information.

Like it or not, technology is part of the patient experience. One study found that barriers to widespread adoption of electronic personal health records will likely include computer anxiety and concerns for security and privacy.

For better or worse, technology is affecting the doctor-patient relationship. According to Eric Topol, executive vice president of Scripps Research, the most beneficial change can come if we properly navigate artificial intelligence. 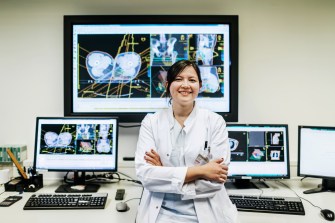 With AI taking on the routine work, doctors will have more time to be actively involved with patients and referring physicians.Photo: Tom Werner/Getty Images

That may sound counterintuitive. Technology like EHRs have affected doctor-patient interactions, and when we speak of AI entering a job market, it’s with premonitions of the robopocalypse. Consider America’s roughly 2 million truckers, who may lose their jobs to self-driving vehicles.

Yet blue-collar jobs are not the only ones subject to AI takeover. Some jobs that require the most advanced education are more likely to become obsolete, according to entrepreneur Andrew Yang. “Doctors, lawyers, accountants, wealth advisers, traders, journalists, and even artists and psychologists who perform routine activities will be threatened by automation technologies,” he writes in The War on Normal People.

Day-to-day workplace routines will determine whether AI can perform a job, because the technology can perform routine tasks faster and more accurately than people, without needing a break.

To pick one example from medical practice, radiologists spend much of their time analyzing patient films. It takes years of education to develop that skill. Even then, certain diagnoses can be tricky and human deficiencies, such as confirmation bias and inattentional blindness, can lead to mistakes.

Deep learning could streamline the process of analyzing medical images. One day, AI may be able to read more medical images more quickly and compare them to a catalog exponentially larger than anyone could memorize. It may also detect anomalies too fine for detection by the human eye. And you only have to develop an AI once, as opposed to the extensive costs of training and maintaining human radiologists.

AI is unlikely to eliminate the need for radiologists, but rather it may enable radiologists to be more actively involved with patients and referring physicians as part of the care team. We’re years away from AI becoming commonplace in radiology departments. However, the principles are sound and the technology is already under development. Some day, when AI can manage standalone diagnosis for routine cases, radiologists will be free to focus on the most challenging cases. 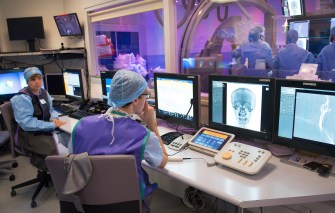 AI will free up radiologists’ time to work on the most challenging cases. Here, neuroradiologists in Paris operate on a patient affected with an arteriovenous deformation.Photo GERARD JULIEN/AFP/Getty Images

In Deep Medicine, Topol suggests that well-implemented AI can free physicians from repetitive tasks, providing more face time to meet, inform, reassure and follow up with patients. It can also minimize burnout and improve health care quality. Topol cites one study from the National Bureau of Economic Research that found for every extra minute a home visit lasts, risk of readmission was reduced by 8 percent.

The same gains may be possible with EHRs. Integrated AI can make it easier to log entries, consolidate records, and draw data from external sources such as a patient’s smartwatch or mobile device.

“Human performance is unlikely to change materially over time. But machines will progressively outperform humans for various narrow tasks,” Topol writes. “To take humans to the next level, we need to up our humanist qualities, that which will always differentiate us from machines.” He calls deep learning’s potential to support medical empathy and outcomes “deep empathy.”

Busywork and routine labor so severely cut into physician schedules that Danielle Ofri, an associate professor of medicine at New York University School of Medicine, has suggested imposing fines on hospitals that detract too much from patient face-time.

As the National Bureau of Economic Research survey suggests, health care is a field where literally every minute counts.

“Most importantly … when people are sick, they need empathy,” Topol told Big Think in an interview. “They need the person who is their doctor to be with them, to understand what they’re going through, because being in pain and being sick is the loneliest thing in the world. And if you don’t have a doctor that is empathic, that is the worst-case scenario. We’ve got to get that back.”

But Topol indicates a caveat: Implementing AI in health care just as an efficiency tool would counteract potential gains in doctor-patient relationships.

Michael Dowling agrees. As he told Big Think in an interview: “A lot of publicity has been given to a lot of these [big tech] players. But the core of the care being delivered to people who are very sick is still being done at hospitals and doctors’ and ambulatory sites.”

And that core must be building a humane — and, indeed, human — doctor-patient relationship.

Tags
artificial intelligencefuturehealth carehuman bodymedicinetechnologywork
In this article
artificial intelligencefuturehealth carehuman bodymedicinetechnologywork
Related
Health
COVID, RSV and the flu: A case of viral interference?
Viruses, it turns out, can block one another and take turns to dominate.
Health
Chantix, Trulicity, Xeljanz, and most drugs advertised on TV are of “low therapeutic value”
Close to 70% of drugs advertised on TV offer little to no benefit over other cheaper drugs.
Neuropsych
Shopping with your nose: How body odors influence your buying behavior
Sniffing out a deal.
The Past
Ceramics, corn cobs, and other strange things we used before toilet paper
Some objects were softer than others.
Health
New killer CRISPR system is unlike any scientists have seen
Once activated, the CRISPR-Cas12a2 system goes on a rampage, chopping up DNA and RNA indiscriminately, causing cell death.
Up Next
Self-Motivation
Tim Ferriss: How to break the procrastination spell – for good
Is there anyone who hasn’t at one time or another found themselves procrastinating? It can gradually become a terrible trap: As a deadline looms, the task seems to grow bigger […]