The need for meaning seems to be intrinsic to human beings. The question of what meaning life has, if any, and how to live a life in accordance with that goes back to the earliest days of philosophy and defined the work of some of the most famous names in the business. A new study reminds us of the practical nature of the question and the importance of answering it, as it seems people who feel they are living a worthwhile life have better outcomes in just about every other aspect of their lives.

A meaningful life correlates with health and wealth

Over the course of four years, more than 7000 adults over the age of 50 in the UK were asked to participate in the study. They rated how meaningful they supposed their lives were on a scale of 0-10 and then answered other questions relating to their habits. Health values were measured during an in-home meeting with a nurse who took blood samples.

Of course, the study shows correlation and not causation. However, the results do remain after accounting for other factors like sex, age, and socio-economic status; suggesting that there is something of substance to the findings.

What things were the well-off people doing? I’m asking for a friend.

In short, they were out doing things and not sitting at home.

More specifically, they were spending less time in front of the television or sitting alone and more time out with friends. They were engaged with civic or cultural activities, were doing more volunteer work, exercised more, and ate better.

Of particular interest to the authors was the social engagement of the participants. Co-author Dr. Andrew Steptoe told Psychology Today that:

“I’m struck by the consistency of associations between these feelings [of living a meaningful life] and social and cultural activity. On the other hand, the people who had low ratings tended to spend a lot of time alone. They tend to watch television more and do more passive activities.”

Precisely what you do might not be the essential thing, so long as you find it meaningful. This is a popular idea supported by many people including psychologist Viktor Frankl, who famously thought the important thing was finding meaning to your life even to the point of dictating to patients what meaning their lives might have.

Study co-author Dr. Daisy Fancourt agrees with the idea that it might be the belief in meaning that matters and said:

“We do not know what activities the participants in this study thought were worthwhile. For some it might be supporting their families, for others a particular accomplishment in their work or hobby, enjoying nature or perhaps following a favorite sports team. What is important is that the individual finds these activities worthwhile and feels they give a sense of meaning to life.” 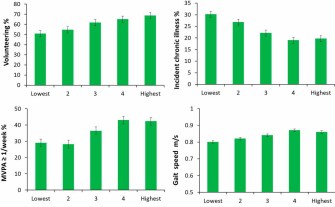 A portion of a graph from the study showing the association of higher well being ratings, here listed in blocks from lowest to highest, with a variety of health outcomes and social engagement levels.

How can I use this information?

The study found that people with a strong sense of having a worthwhile life but lower scores in other areas saw marked improvement by the end of the study. This means that somebody who was inactive or uninvolved at the start of the study was more likely to start exercising or become more socially active than a similar test subject who didn’t think their life had meaning.

Dr. Steptoe sees this activity as part of a larger cycle that can be harnessed for our improvement or detriment:

“The sorts of things we do are going to be influencing these judgments of the purpose and worthwhileness of what we do in life. But those things in turn are going to be either stimulating or inhibiting future activities. It’s a virtuous circle.”

The authors also suggest that the findings could be used to help promote the well-being of older adults, an increasingly important issue as the number of older people continues to increase. However, since this study shows only a correlation between welfare and the idea of a worthwhile life, further research is needed before an effective program can be devised.

Is the key to living a healthy, engaging, and worthwhile life the belief that your life is meaningful? While the jury is still out, the results of this study suggest that it can’t hurt. So go on, get out a little more. Spend more time with friends, family, and organizations you support. While it may not put all your existential dread to rest, it might help keep you healthy in your old age.

Tags
agingfriendshipshealthmoneyphilosophy
In this article
agingfriendshipshealthmoneyphilosophy
Related
The Learning Curve
5 Stoic quotes to help you through difficult times
“We suffer more often in the imagination than in reality.”
Thinking
6 great philosophers and how they used their political power
Most philosophers merely contemplate the world, but what about the ones who actually tried to change it?
Thinking
Finding your essential self: the ancient philosophy of Zhuangzi explained
Adopting a healthy scepticism towards inherited ideas means “emptying the container of the Self.”
Thinking
Why you should laugh at yourself, according to Seneca and Nietzsche
“It is more human to laugh at life than to lament it.”
13.8
Why the origin of life and the Universe itself might be forever unknowable
There might be a hard limit to our knowledge of the Universe.
Up Next
Hard Science
Here’s what the new TESS telescope has already discovered
It has already found several bizarre planets outside of our solar system.