These words describe love, desire, and relationships that have no real English translation but they capture subtle realities that even English speakers have felt once or twice. 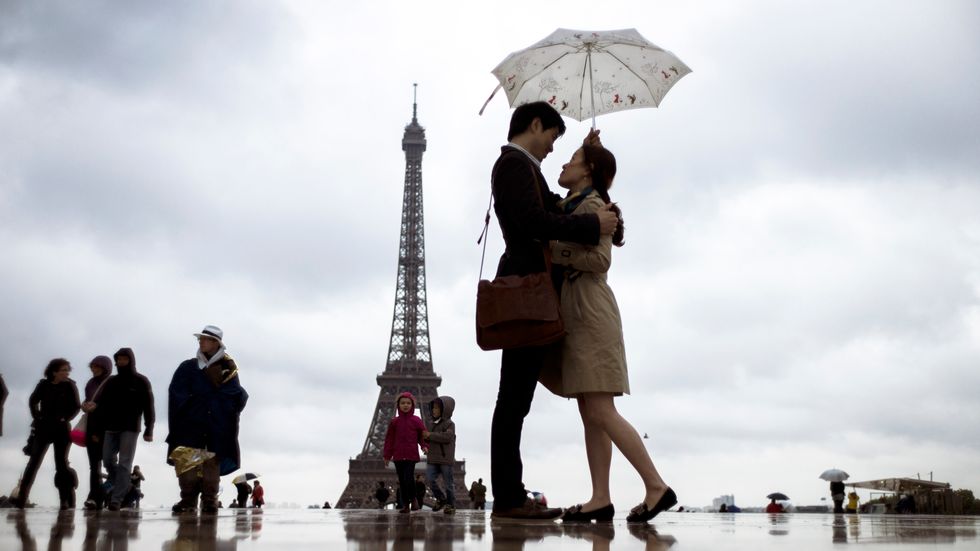 Here are my top ten words, compiled from online collections, to describe love, desire and relationships that have no real English translation, but that capture subtle realities that even we English speakers have felt once or twice. As I came across these words I’d have the occasional epiphany: “Oh yeah! That’s what I was feeling...”

1. Mamihlapinatapei (Yagan, an indigenous language of Tierra del Fuego): The wordless yet meaningful look shared by two people who desire to initiate something, but are both reluctant to start.

Oh yes, this is an exquisite word, compressing a thrilling and scary relationship moment. It’s that delicious, cusp-y moment of imminent seduction. Neither of you has mustered the courage to make a move, yet. Hands haven’t been placed on knees; you’ve not kissed. But you’ve both conveyed enough to know that it will happen soon… very soon.

2. Yuanfen (Chinese): A relationship by fate or destiny. This is a complex concept. It draws on principles of predetermination in Chinese culture, which dictate relationships, encounters and affinities, mostly among lovers and friends.

From what I glean, in common usage yuanfen means the "binding force" that links two people together in any relationship.

But interestingly, “fate” isn’t the same thing as “destiny.” Even if lovers are fated to find each other they may not end up together. The proverb, “have fate without destiny,” describes couples who meet, but who don’t stay together, for whatever reason. It’s interesting, to distinguish in love between the fated and the destined. Romantic comedies, of course, confound the two.

3. Cafuné (Brazilian Portuguese): The act of tenderly running your fingers through someone's hair.

4. Retrouvailles (French):  The happiness of meeting again after a long time.

This is such a basic concept, and so familiar to the growing ranks of commuter relationships, or to a relationship of lovers, who see each other only periodically for intense bursts of pleasure. I’m surprised we don’t have any equivalent word for this subset of relationship bliss. It’s a handy one for modern life.

5. Ilunga (Bantu): A person who is willing to forgive abuse the first time; tolerate it the second time, but never a third time.

Apparently, in 2004, this word won the award as the world’s most difficult to translate. Although at first, I thought it did have a clear phrase equivalent in English: It’s the “three strikes and you’re out” policy. But ilunga conveys a subtler concept, because the feelings are different with each “strike.” The word elegantly conveys the progression toward intolerance, and the different shades of emotion that we feel at each stop along the way.

Ilunga captures what I’ve described as the shade of gray complexity in marriages—Not abusive marriages, but marriages that involve infidelity, for example.  We’ve got tolerance, within reason, and we’ve got gradations of tolerance, and for different reasons. And then, we have our limit. The English language to describe this state of limits and tolerance flattens out the complexity into black and white, or binary code. You put up with it, or you don’t.  You “stick it out,” or not.

Ilunga restores the gray scale, where many of us at least occasionally find ourselves in relationships, trying to love imperfect people who’ve failed us and whom we ourselves have failed.

6. La Douleur Exquise (French): The heart-wrenching pain of wanting someone you can’t have.

When I came across this word I thought of “unrequited” love. It’s not quite the same, though. “Unrequited love” describes a relationship state, but not a state of mind. Unrequited love encompasses the lover who isn’t reciprocating, as well as the lover who desires. La douleur exquise gets at the emotional heartache, specifically, of being the one whose love is unreciprocated.

7. Koi No Yokan (Japanese): The sense upon first meeting a person that the two of you are going to fall into love.

This is different than “love at first sight,” since it implies that you might have a sense of imminent love, somewhere down the road, without yet feeling it. The term captures the intimation of inevitable love in the future, rather than the instant attraction implied by love at first sight.

8. Ya’aburnee (Arabic): “You bury me.” It’s a declaration of one’s hope that they’ll die before another person, because of how difficult it would be to live without them.

The online dictionary that lists this word calls it “morbid and beautiful.” It’s the “How Could I Live Without You?” slickly insincere cliché of dating, polished into a more earnest, poetic term.

9. Forelsket: (Norwegian):  The euphoria you experience when you’re first falling in love.

This is a wonderful term for that blissful state, when all your senses are acute for the beloved, the pins and needles thrill of the novelty. There’s a phrase in English for this, but it’s clunky. It’s “New Relationship Energy,” or NRE.

10. Saudade (Portuguese): The feeling of longing for someone that you love and is lost. Another linguist describes it as a "vague and constant desire for something that does not and probably cannot exist."

It’s interesting that saudade accommodates in one word the haunting desire for a lost love, or for an imaginary, impossible, never-to-be-experienced love. Whether the object has been lost or will never exist, it feels the same to the seeker, and leaves her in the same place:  She has a desire with no future. Saudade doesn’t distinguish between a ghost, and a fantasy. Nor do our broken hearts, much of the time.