While we tend to think of dinosaurs as gigantic, they are not the biggest animals ever. In fact, the largest animal to have ever lived is around on our planet right now. It’s a blue whale, a giant that can reach up to 100 feet (30m) in length and 200 tons (400,000 pounds) in weight. This huge beast, while endangered, is still roaming our waters, with an estimated 10,000 to 25,000 blue whales alive today. Now scientists figured out why baleen whales like the blue whale got to be so big.

One previous theory explaining the gigantism of whales saw their large size as an adaptation necessary to fight off megasharks and other enormous prehistoric animals. But scientists found out that until about 4.5 million years ago whales stayed moderate in size – about 10 meters long. Then, near the beginning of the first Ice Age, they started growing larger.

What happened? Researchers from the University of Chicago, Stanford University and the Smithsonian’s National Museum of Natural History studied fossils of 63 extinct whales to figure it out. They propose that the explanation lies in the dramatically changed diets of the animals.

“We might imagine that whales just gradually got bigger over time, as if by chance, and perhaps that could explain how these whales became so massive,” said the study’s co-author Graham Slater, who teaches geophysical sciences at the University of Chicago. “But our analyses show that this idea doesn’t hold up—the only way that you can explain baleen whales becoming the giants they are today is if something changed in the recent past that created an incentive to be a giant and made it disadvantageous to be small.” 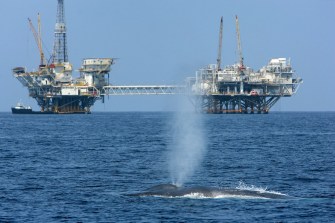 A rare and endangered blue whale, one of at least four feeding 11 miles off Long Beach Harbor in the Catalina Channel, spouts near offshore oil rigs after a long dive July 16, 2008 near Long Beach, California. (Photo by David McNew/Getty Images)

As glaciers grew during the Ice Age, their “runoff” or melting periods in the spring and summer dumped nutrients into the ocean, allowing for an explosion in the amount of tiny crustaceans called krill and other small animals whale eat. Before this, food for the whales was available all throughout the year, but the resulting climate change caused much of that supply to disappear.

Instead, food was now available in abundance seasonally and only in certain areas. This encouraged the whales to grow bigger and faster, to be able to find, consume and store food more efficiently. The reason the bigger whales were preferred by evolution is that they could survive the long migrations necessary to get to the next patch of food.

Check out this video from Science Magazine:

The research not only sheds light on the mystery of the whales’ size but also provides insight into how oceans sustain life.

“An animal’s size determines so much about its ecological role,” said Smithsonian’s Nicholas Pyenson, the study’s co-author. “Our research sheds light on why today’s oceans and climate can support Earth’s most massive vertebrates. But today’s oceans and climate are changing at geological scales in the course of human lifetimes. With these rapid changes, does the ocean have the capacity to sustain several billion people and the world’s largest whales? The clues to answer this question lie in our ability to learn from Earth’s deep past—the crucible of our present world—embedded in the fossil record.”

Tags
biologyblue whaledinosaurdiscoveryevolutiongigantichistoryice agesciencesmithsonianstudyuniversity of chicagowhale
In this article
biologyblue whaledinosaurdiscoveryevolutiongigantichistoryice agesciencesmithsonianstudyuniversity of chicagowhale
Related
Strange Maps
The horrors of World War II air war, in one stark map
This graph shows how badly German cities were hit by Allied bombing raids.
The Well
Can we condition ourselves to be heroes?
Neuroscientist Robert Sapolsky on the science of temptation, and the limitations of your brain’s frontal cortex.
▸
6 min
—
with
Robert M Sapolsky
High Culture
Why are flood myths so common in stories from ancient cultures around the world?
Could the prevalence of flood myths around the world tell us something about early human migration or even the way our brains work?
The Past
The Wild West was lawless and chaotic — and the police helped keep it that way
Lawmen and outlaws were often the same people.
Thinking
6 great philosophers and how they used their political power
Most philosophers merely contemplate the world, but what about the ones who actually tried to change it?
Up Next
Starts With A Bang
New Podcast! The Fate of the Universe
After 13.8 billion years, we just might know all the rest to comeHave you ever wondered how the Universe will end? In the far future, everything that we know, see, measure […]