Three billion years ago, Earth would not have been all that pleasant for humans. It was covered in active volcanoes, spewing out carbon dioxide and water vapor. Single-celled life scraped by on a diet of sulfur. Most of the atmosphere consisted of carbon dioxide, methane, and other greenhouse gases, leaving the air toxic for us and most other modern life on Earth.

Then, about 2 and a half billion years ago, something happened. With what amounts to a snap of the fingers in geologic timescales, the atmosphere was pumped full of oxygen in what we call the Great Oxygenation Event. The abundance of oxygen meant that new, more diverse kinds of life could take a hold on the young planet, such as Eukaryotes. Fast-forward a few billion years, and complicated, multicellular life like ourselves are walking around the planet.

So where did all of this oxygen come from? Today, we think that nearly all of the oxygen on Earth came from cyanobacteria, tiny, blue-green, single-celled life that had the innovative idea of using sunlight to bake water and carbon dioxide into sugar for energy — that is, photosynthesis. Unfortunately for the cyanobacteria, photosynthesis makes the unappealing byproduct of oxygen, which they throw away into their environment.

Every breathe we take, we owe to cyanobacteria, and this influx of oxygen into our environment is ultimately responsible for why modern Earth is so accommodating to life. But what Earth giveth, Earth also taketh away. Whether it’s because of climate change, nuclear war, a global pandemic, or some unknown catastrophe, eventually we’ll want a new home. But our closest, best hope for a new home — Mars — doesn’t have any oxygen.

It doesn’t have much of an atmosphere at all, really.

This said, scientists are hoping to recreate the Great Oxygenation Event on Mars much in the same way it happened on Earth; by using microbial life to build the environment for us. 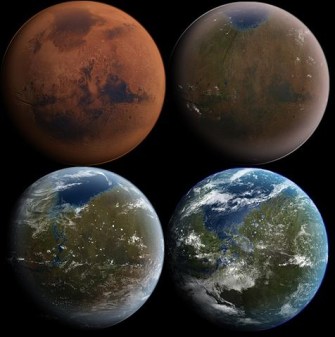 An artist’s depiction of a Martian terraforming effort’s progression.

While Mars might be different from early Earth in many ways, it does possess some key characteristics that could make a microbial terraforming project work. Mars has an atmosphere that’s 95 percent carbon dioxide, which provides half of the ingredients needed for cyanobacteria to make oxygen. The other ingredient, water, is admittedly scarce on the Red Planet, but we’ve seen evidence that it exists. We know that ice is abundant in the poles, so much so that if we were to melt them, Mars would be covered in an 18-foot-deep ocean.

There’s already some liquid water that exists on Mars, to be sure — just in very scant amounts. We’ve seen features on Mars called recurring slope lineae, which are dark lines that advance down the sides of hills during the Martian summer and fade away during the winter. These dark lines are thought to be flows of water that come and go with the seasons. 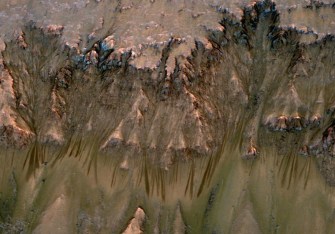 This image of the side of a Martian crater shows recurring slope lineae. The dark lines descending from the slope of the crater come and go with the seasons, which may indicate flowing water.

So, to terraform Mars, we would start with areas where we know liquid water exists and dump a lot of cyanobacteria there. Admittedly, it would be a bit more of a sophisticated operation than that makes it sound, but that’s the gist of the idea. We would also want to include microbes that produce greenhouse gases.

Mars has the opposite problem as Earth; we want to make Mars hotter and thicken its atmosphere, so its polar ice can melt. More water means more opportunities for microbial life to do its work. Not to mention that the current climate on Mars is much too chilly for even the hardiest human — it averages at about minus 81 degrees Fahrenheit, although the temperature can vary wildly.

The idea of using microbes to kickstart a terraforming project on Mars is so promising that NASA has already begun preliminary tests. The Mars Ecopoiesis Test Bed is a proposal for a device to be included with future robotic missions to Mars. It would look something like a drill with a hallow chamber inside. The drill would bury itself in the Martian soil, preferably somewhere with liquid water. A container full of cyanobacteria would be released into the chamber, and sensors would detect whether the microbial life produce any oxygen or other byproducts.

The first phase of this project was conducted in a simulated Martian environment here on Earth, and the results were positive. But even still, there are some major challenges we’ll have to meet if we want to use microbially terraform Mars on a large-scale.

Mars lacks something very necessary for life-giving planets: a magnetosphere. Mars used to have a magnetic field that protected the planet. We’ve found magnetized rocks on the surface indicating that this was the case, but at some point, the magnetic field just disappeared, and we don’t know for certain what happened. Without a magnetosphere, the planet’s surface is bombarded by solar radiation, which will make larger, more complex life difficult to sustain.

This “solar wind” also blows away the Martian atmosphere. So, even if we do coax microbial life into producing oxygen and other gasses, much of it will simply float away into space.

These images show different elements escaping from the Martian atmosphere. From left to right, the images show carbon, oxygen, and hydrogen floating away to space.

Fortunately, these challenges are not insurmountable. In the short term, we’ll likely construct dome-like habitats to protect both us, our cyanobacteria, and our new atmosphere from the solar wind. In the long term, NASA scientists have proposed placing a powerful magnet in fixed orbit between Mars and the Sun. This magnet will redirect the solar wind, shielding the Martian atmosphere. As microbial life continues to output oxygen and greenhouse gases into the Martian atmosphere, the planet will warm up, the ice caps will melt into oceans, and Mars may very well become our second home.

Tags
astrobiologybacteriaclimate changemarsmicrobesnasaplanets
In this article
astrobiologybacteriaclimate changemarsmicrobesnasaplanets
Related
Health
COVID, RSV and the flu: A case of viral interference?
Viruses, it turns out, can block one another and take turns to dominate.
Life
Most of the seafloor is a thick graveyard of ooze
Each year, several trillion pounds of microscopic silicon-based skeletons fall down the water column to pile up into siliceous ooze.
Health
New killer CRISPR system is unlike any scientists have seen
Once activated, the CRISPR-Cas12a2 system goes on a rampage, chopping up DNA and RNA indiscriminately, causing cell death.
Health
Visualizing cells at previously impossible resolutions provides vivid insights into how they work
Cryo-electron tomography, or cryo-ET, is the future of cell research.
Life
“Virivores” discovered: Microbes that survive on a virus-only diet
Carnivores, herbivores, omnivores — and now virivores.
Up Next
The Present
Is “The Journal of Controversial Ideas” dangerous?
Should all ideas see daylight?