One day humanity will again step foot on other worlds. When that day comes we will need to build new cities in these places. Where we go, our cities go. The urban form follows us like a civilizational shadow.

In order to house our post-terrestrial bound culture, we’ll first need to layout the new order of our settlements. There are three prime candidate planets and places in space that may be the first to house our founding space pioneers.

These are the Moon, Mars, and orbital habitats around Earth.

In 1977 NASA published “Space Settlements: A Design Study.” This extensive 155-page book essentially contains a city planning policy guide on the future of cities and urban planning in space. The book focuses exclusively on orbital civilian habitats – the type that would revolve and settle in Lagrange Points around Earth.

“Space Settlements” covers everything it can think of, from the psychology of its inhabitants, rocket landing areas, and zoning land-use to the barebones of oxygen production. Even with such depth the book still covers only a small portion of the challenges facing space colonization.

The sheer scale of genius needed for this feat will keep us busy down here for years.

Yet, urbanists would be happy to hear that the plan advocates for communities that are walkable, transit-oriented, dense and inclusive. This list checks off a fair bit of principles modern urban planners abide by.

The book’s authors even took the time to think about the notion of the first extraterrestrial pioneers’ budding culture:

The present technological nations are not necessarily advantaged, because the technology they possess is “Earth-bound” in addition to being culture-bound. They may have first to unlearn the forms, the assumptions and the habits of the Earth-bound technology before learning the new forms and assumptions of technology useful in extraterrestrial communities.

Moon culture evolution, confirmed. The thought of new cultures developing in the newly forged lunar cities and floating metropolis colonies would be a testament to our accomplishment. 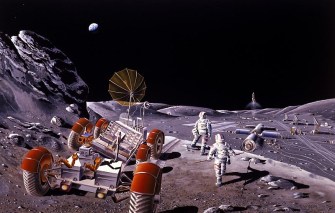 What would it take to build a full scale city on the moon? Skidmore, Owings & Merrill recently threw their hat in the proverbial moon ring.

In partnership with the European Space Agency (ESA) and the Massachusetts Institute of Technology (MIT), SOM presented a conceptual design for their “Moon Village.” In a press statement, Design Partner Colin Koop talked about the new challenges needed for architectural design in space.

“The project presents a completely new challenge for the field of architectural design. The Moon Village must be able to sustain human life in an otherwise uninhabitable setting. We have to consider problems that no one would think about on Earth, like radiation protection, pressure differentials, and how to provide breathable air.”

Masterplanning, designing and engineering the imagined settlement, SOM imagines are cross-disciplinary collaboration and an entirely new way to approach the space industry’s most complex problems.

The Moon Village would sustain its energy from direct sunlight and set up food generation and life-sustaining elements through in situ resource utilization by tapping into the Moon’s natural resources. Water extracted from the depressions near the South Pole would create breathable air and rocket propellants to support the burgeoning industry in the town. By being near the South Pole, the town would have direct access to the crater’s water-ice deposits.

As for habitats for lunarites to live in, there would be individual pressurized modules which are inflatable, giving residents the flexibility to increase their living space when needed.

Most buildings would be three to four story structures that would serve as a combined workspace, living quarter and have the necessary environmental and life support systems integrated into each one.

The Moon Village was created for the ESA’s reflection of future exploration beyond 2050 in partnership with NASA’s strategic plan to “extend human presence deeper into space and to the Moon for sustainable long term exploration and utilization.”

A pioneer Moon Village could set in stone the first opportunity to permanently inhabit the moon, spur research and explorations and serve as a gateway to the rest of the solar system and beyond. Such ring habitats have been a common sight in science fiction for years, from Halo’s massive ring worlds to Neuromancer’s Tessier-Ashpool floating Freeside. But physicists have known for quite some time that they’re actually possible to build. When space becomes more accessible, these would be the first contenders for habitation.

In NASA’s “Space Settlements” study, researchers dedicated a few chapters on basic comprehensive plans, which is a deep dive into how much space would be needed for residential housing, schools and other land uses combined with transportation and other infrastructure. As for transportation, the book again goes into detail:

“Because of the relatively high population density (15,000 people/km2) in the community, most of the circulation is pedestrian, with one major mass transport system (a moving sidewalk, monorail, and minibus) connecting different residential areas in the same colony.”

These floating cylinders with artificial gravity would survive by creating from the natural resources of outer space. Again in the 1970s Princeton physicist Gerald K O’Neill laid out compelling studies where he envisioned 100,000-person colonies, stationed at what is known as the fifth Lagrangian libration point (L5) in the moon’s orbit.

“It is orthodox to believe that Earth is the only practical habitat for Man, but we can build new habitats far more comfortable, productive and attractive than is most of Earth,” he wrote in Physics Today in 1974.

He was interested in building alternative human habitats that were both beyond Earth and beyond a planetary body. Out of this was conceived the idea of a giant rotating spaceship, which could support a biosphere and house up to 10 million people. 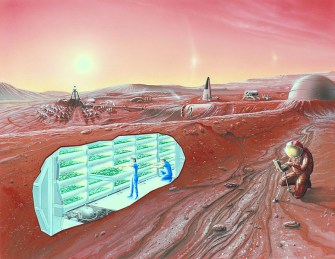 In 2017, an MIT team developed a design for a settlement that won the Mars City Design competition. MIT’s winning urban plan, titled Redwood forest, proposed to create domes or tree habitats that would house up to 50 people each. The domes provided residents with open public spaces containing vegetation and water, which would be harvested from deep in the Martian northern plains.

The tree habitats would be connected on top of a network of tunnels, or roots, providing transportation and access to both public and private spaces between other inhabitants of this proposed 10,000 strong community. Advanced technology such as artificial light inside these pods could strongly mimic the sight of natural sunlight.

“On Mars, our city will physically and functionally mimic a forest, using local Martian resources such as ice and water, regolith (or soil), and sun to support life. Designing a forest also symbolizes the potential for outward growth as nature spreads across the Martian landscape. Each tree habitat incorporates a branching structural system and an inflated membrane enclosure, anchored by tunneling roots.

The design of a habitat can be generated using a computational form-finding and structural optimization workflow developed by the team. The design workflow is parametric, which means that each habitat is unique and contributes to a diverse forest of urban spaces.”

The team aims to build a comfortable environment and architecture that focuses on the fundamental and critical aspect of sustainability, a baseline component needed for any Mars or offworld city.

On the entirety of the system, System Design Management Fellow George Lordos summed up the functionality by explaining the holistic and connected system they imagined.

“Every tree habitat in Redwood Forest will collect energy from the sun and use it to process and transport the water throughout the tree, and every tree is designed as a water-rich environment. Water fills the soft cells inside the dome providing protection from radiation, helps manage heat loads, and supplies hydroponic farms for growing fish and greens. Solar panels produce energy to split the stored water for the production of rocket fuel, oxygen, and for charging hydrogen fuel cells, which are necessary to power long-range vehicles as well as provide backup energy storage in case of dust storms.”

Mike Colagrossi is the founder of Alchemist City, the most thought-provoking urban development and technology email newsletter. Sign up to stay up to date.

Michio Kaku believes math is the mind of God.
▸
6 min
—
with
Michio Kaku
Up Next
Life

Modern crops have been optimized for a lot of things, but not for climate change.