Becoming a fossil is no easy matter. There are a number of conditions that have to be met, according to Paige Williams, author of The Dinosaur Artist. You can’t be eaten by scavengers; the weather must not scatter your remains; your burial must be immediate, soil conditions pending — bonus points for sedimentary rock. Indeed, you have to hope natural forces create a proper grave for your teeth and bones.

Then, to even start to be scientifically useful, you must be discovered.

Less than one percent of the world’s animals are fossilized, but what a treasure trove they provide. Without them we’d have never calculated the age of the planet or understood evolution. We’d never have realized the continents were once united or that climate change had taken place before. Perhaps worst of all, we’d have no museums to lose ourselves in wonder inside.

Evolution is slow, yet sometimes a catalyst speeds along the planetary forces. We’ve long known an asteroid smashing into the Yucatan was responsible for decimating the dinosaurs whose fossils we so revere today. Sixty-six million years ago a minor planet made a major impact known as the Chicxulub crater. What we didn’t know, but now do thanks to new research by paleoceanographer Molly Range, is that the crash created a mile-high tsunami that spread across a sizable portion of the planet.

To put this into perspective, geologist Trevor Nace explains:

“Stack the Empire State Building, the Statue of Liberty, the Eiffel Tower, Great Pyramid of Giza and One World Trade Center all on top of each other and this wave would be taller.”

The 2004 Indian Ocean tsunami, created by an oceanic earthquake, killed over 227,000 people in 14 countries. The highest tsunamis hitting coastal regions at that time was 100 feet high. The ancient tsunami crashing into what would become Mexico was 52 times higher and, according to the team, 2,600 times more energetic.

The research team, who shared their findings with the American Geophysical Union in December, also believes the tsunamis might have disturbed sediments over 6,000 kilometers (3,700 miles) away from the impact origin and that the seas and oceans experienced waves 14 meters (46 feet) high in both the North Atlantic and South Pacific. 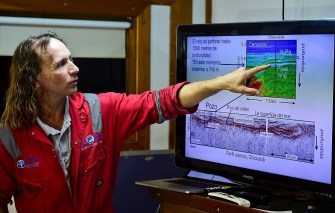 To conduct her research, Range and her team utilized two models. The first simulated how much water an asteroid leaving a 14-kilometer crater would create; the second estimated the ripple effect of such an impact in shallow water. The initial crash, they reason, created a 1,500-meter-high tsunami wave, just under a mile tall.

Moments after impact, water came rushing back in to fill the crater, triggering another set of waves. Due to a seaway between North and South America at the time, the waves rushed into the Pacific Ocean. Spreading east and west at an average height of 14 meters, they grew in size as they slowed down upon approaching land.

If you think watching (or better, reading) “A Perfect Storm” was a harrowing affair, no amount of CGI can aid us in envisioning a wave of such magnitude. Seventy-five percent of all species on earth perished in the preceding… months? Years? Hard to say in a time before time was a measure. Alpha dinosaurs gone, though, the door was open for an even more diverse roster of animals to evolve and flourish.

The new findings are a fascinating window into how life came to be on this planet, and a reminder to be thankful we haven’t seen such an impact in over 60 million years — even though a 127-foot asteroid barreled past earth earlier this week. Good thing NASA is testing its planetary defense system in case of even closer calls.

We want to fight invasive species. But to wage a war, you have to know who your enemy is.
Up Next
Neuropsych

I think, therefore I am. I think.

Digging deeper into the mystery of the brain, soul, and consciousness.