NASA’s space probes unexpectedly found a giant “barrier” around Earth that’s affecting space weather even beyond our planet. And what’s more – humans made it, even if unwittingly. The bubble-like barrier works to protect the planet from dangerous space events, like solar flares and other ejections from the sun.

The bubble is an unintentional consequence of human technology use. It is the result of certain type of radio communications intersecting with high-energy radiation particles in space. In particular, very low frequency (VLF) radio signals of 3 to 30 kHz were found to affect how and where particles in near-Earth space move.

In one common application, VLF signals are used to communicate between submarines and ground stations. These same signals end up in space as well, creating a VLF bubble around the planet that can even be seen by some orbiting spacecrafts.

NASA’s Van Allen probes were launched in 2012 to study our planet’s Van Allen radiation belts. The two belts are full of charged particles controlled by Earth’s magnetic field. The inner Van Allen Belt stretches from 400 to 6,000 miles above Earth, while the outer is beyond 8,000 miles, going up to 36,000 miles. 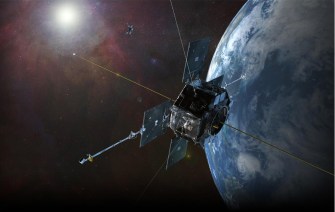 At speeds of around 2,000 mph (3,200 km/h), the probes explored the belts and detected a curious coincidence that “the outward extent of the VLF bubble corresponds almost exactly to the inner edge of the Van Allen radiation belts,” as explained by NASA’s statement.

This led the scientists to propose that VLF waves are pushing radiation particles away. In fact, the inner edge of the belts appears to have been much closer to Earth in the past and has been steadily pushed away. This process seems to be helping shield us from radiation courtesy of harmful solar discharges.

“A number of experiments and observations have figured out that, under the right conditions, radio communications signals in the VLF frequency range can in fact affect the properties of the high-energy radiation environment around the Earth,” said Phil Erickson from MIT’s Haystack Observatory.

What’s also noteworthy is that we are not only affecting our own lives and what happens on planet Earth, but are now creating an impact that stretches into space. To build on the research, scientists look to explore a possible use of VLF frequencies in removing “excess radiation” from the near-Earth atmosphere that appears during times of dangerous space weather caused by eruptions on the sun.

You can read the results of the study in this recent paper in Space Science Reviews.

Check out NASA’s video about the “barrier”:

Tags
discoveryearthmilitaryMITnasaradiationsciencespace bubblespace probesun flarestechnologyVan Allen beltsVLF
In this article
discoveryearthmilitaryMITnasaradiationsciencespace bubblespace probesun flarestechnologyVan Allen beltsVLF
Related
The Past
Here is the most terrifying pterosaur ever discovered
Meet your new flying nightmare: Thapunngaka shawi.
The Well
How Earth’s axis and rotation created human ritual
Why do so many cultures celebrate holidays at the same time of year?
▸
4 min
—
with
Sasha Sagan
Why geniuses hunt demons for sport
Jimena Canales shares the “demons” that shaped computer science.
▸
6 min
—
with
Jimena Canales
The Well
The 3 “demons” that haunted legendary scientists
Darwin, Descartes, and Maxwell all believed in these science ‘demons.’
▸
7 min
—
with
Jimena Canales
Harvard professor debunks the biggest exercise myths
Exercise culture is crazy. But what you need to do is exceedingly simple.
▸
with
Daniel Lieberman
Up Next
Culture & Religion
How Endangered Species Are Put at Risk by Scientists Trying to Save Them
Poachers, hunters, and collectors are targeting animals on the endangered species list for their rarity.