It has been said that the universe is “not only stranger than we imagine, but that it is stranger than we can imagine.” John Haldane, the originator of that quote (slightly different wording according to some sources), might have been more correct than he knew. Since his death, we’ve discovered such exotic objects as pulsars and the cosmic background radiation. Even more out there, scientists have postulated the existence of stuff as bizarre as dark matter,dark energy, and the aptly named “strange matter.“

One doesn’t even need to leave the solar system to find oddities. Last week, we discussed Saturn’s hexagonal storm; today, we’ll look at six of the strangest things in our cosmic backyard and consider why time spent investigating them is not time wasted. 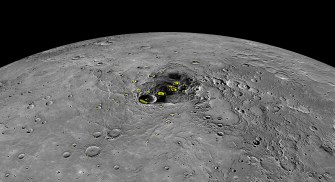 The smallest planet in the solar system constantly outdoes itself. Mercury is shrinking.

Unlike many other items on this list, this strange occurrence is likely caused by a fairly mundane mechanism. As the planet, which is made primarily of metal, has a high iron content, scientists speculate that the planet is shrinking as it continues to cool down from the high internal temperatures it had when it formed.

However, this isn’t the end of things. Why Mercury has such a higher iron content remains a mystery. A leading hypothesis is that the planet used to be much larger, but that many of its non-metallic components were knocked away by an impact with a planetoid or that spikes in the sun’s temperature caused much of the rocky crust of Mercury to vaporize and blow away, leaving an iron core.

As seen from Earth, the sun comes up in the east and sets in the west. On Venus, the opposite is true. This is unique among the planets of the Solar System. Even stranger, it would take 243 Earth days to be able to enjoy another sunrise if you could see it from Venus’ surface. The planet only rotates at a leisurely 6.52 km/h (4.05 mph), compare that to Earth’s 674.4 km/h (1,040.4 mph). For comparison, a Venusian year is only 225 Earth days, meaning a year there is shorter than a day!

The slow rotation speed causes side effects you might not have suspected. While the Earth’s rotation causes the center to bulge out somewhat, Venus lacks this and is much closer to being spherical.

A variety of theories attempting to explain all this have been advanced. One argues that this results from the sun’s tidal forces in battle with those created by the thick Venusian atmosphere, with the former slowing rotation and the later speeding it up. An amusing hypothesis argues that the whole planet was somehow flipped upside down, and it continues to spin in the same direction as it always has. Another suggests that a massive impact, early in the Solar System’s history, knocked Venus so hard it started spinning backward.

This last theory has the bonus of explaining why Venus has no moons, as the resulting powerful tidal forces would have caused any moon there to fall into the planet. 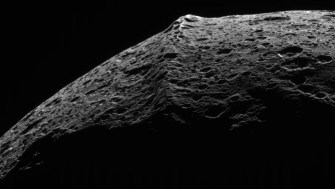 For a ball of ice a little smaller than Australia, Iapetus manages to contain many odd features.

Discovered in 1671, it was immediately noticed that the moon was only visible for a few months out of the year. Astronomers at the time proposed, accurately, that the moon is tidally locked. So, only one side faces Saturn, and that one side is much, much brighter than the other. Modern discoveries show us that this is accurate, with the dark side being darker than charcoal and the light side shining like well-lit ice. It is believed that the original dark material originated from somewhere off of the moon, but that most of what we see today are lag deposits.

Over time, the heat differences (the dark side gets warmer) cause water ice to sublimate and shift location from the dark side to the light. Over vast amounts of time, this leaves one side shinning with ice and the other dark with the mineral residue the water leaves behind as it moves.

Iapetus also has the distinction of being the largest object in the solar system not in hydrostatic equilibrium, as its gravity is not strong enough to force it into a roughly spherical shape. Resultantly, it looks much more like a walnut than a ball.

Adding to the madness is how it orbits Saturn. It has a severely inclined orbit and travels much further out than the other large moons. While astronomers have no idea why this is, it gives it the advantage of being the one large moon of Saturn where an observer could enjoy a good view of Saturn’s ring system.

When the Cassini probe went out of its way to examine Iapetus, it discovered the moon’s walnut shape is accentuated by a dark hemisphere-spanning ridge of peaks reaching up to 20 km (12 miles) high. The light side features no ridge but does have isolated mountains with similar mass. The ridge neatly follows the moons equator with uncanny perfection. Several hypotheses have been proposed to explain the ridge, but they fail to explain why it is only present on the dark side of the moon.

If you remember anything from grade school astronomy about Uranus, it’s probably that it rolls along its side like a ball while the other planets spin like tops. Its poles each spend the solstice either in full sunlight or total darkness. It is only during the equinox, when the poles are oriented perpendicular to the sun, that the entire planet has a day and night cycle similar to the other planets.

Why it rolls like this is unknown. The current leading theory involves what seems to be the favorite explanation of astronomers, a large object knocking into the planet in the early days of the solar system. As you might expect, this orientation means that Uranus’s poles get more sunlight and heat than the equator does. Despite this, the equator is still warmer than the poles are. The cause of this is currently also unknown. 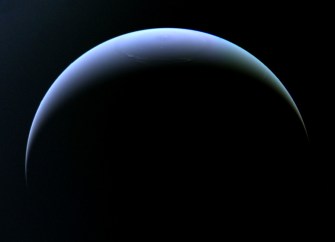 The most distant known planet from the sun (sorry Pluto), Neptune gets a tiny fraction of the heat and light that other planets enjoy. It gets less than half as much sunlight as its neighbor, Uranus. As they say, though, it’s what’s on the inside that counts. Neptune radiates a substantial amount of heat, 2.6 times as much as it gets from the Sun, compared to Uranus’ 1.1 times as much.

This internal heating provides the energy needed for Neptune to have the fastest winds in the solar system, with gusts of up to 2,100 km/h (1,300 mph) observed.

Some scientists propose the heat is just leftover from the planet’s formation. Others suggest that the ice giants’ internal heating might be cyclical, with Neptune and Uranus being out of sync with each other. It is also possible to view Uranus as the strange one, arguing that its internal heating is much lower than it should be. Theories that go this way often suggest that whatever knocked Uranus over took a fair amount of heat with it. The trouble with any hypothesis advanced is that it has to deal with Neptune and Uranus’ apparent similarities while also allowing for this single, tremendous difference.

Neptune was discovered after Uranus’ orbit was observed to differ from predictions in a way that suggested a large object was influencing it. Neptune was discovered orbiting almost exactly where such a large object was expected to be. Today, a similar problem exists with some objects in the Kuiper belt, leading some scientists to argue for the existence of a “Planet Nine,” exerting an influence on their orbits.

Some Trans-Neptunian Objects (TNOs) have clustered orbits. Seen from above, the long ellipses that track their orbits tend to nest inside one another, with their vertexes all pointing in the same direction. Typically, we would expect these orbits to be distributed more randomly. The odds that they would be in the configuration we see them in due to chance are extremely low.

However, a planet around ten times the Earth’s size in an extremely eccentric, far-flung orbit would exert a gravitational pull just strong enough to cause this and other strange phenomena observed in the Kuiper Belt.

Alternative explanations for the observed data exist. They range from the mundane proposal that what we see is coincidentally similar to what a planet would cause, to the exotic notion that we should be looking for small black holes rather than a planet. No Planet Nine has been spotted, but various studies have not yet ruled out the possibility of its existence.

Understanding how these odd phenomena came into existence can give us a better understanding of the formation of the solar system in general and the planets in particular. Having a good idea of where something is coming from is very helpful in science, as it can make it easier to estimate where it is going.

That can be very nice to have when you’re talking about the rock with odd fitting continents, exploding mountains, and an ever-evolving atmosphere floating in space you’re sitting on. Beyond that, many people hope that humans will travel to other bodies in the solar system someday. It might be nice to know a bit about the strange places we might end up traveling to or some of the things we might encounter before heading out.

Even if we don’t ever get to Neptune or Planet Nine, studying the odd parts of the solar system can serve as a reminder of how big and how strange the universe we live in really is. Our changing understanding of the universe has impacted how we live our lives before, and more than a few great thinkers pointed to changes in our understanding of astronomy to justify and explain their thinking in other fields.

Plus, given how many of these oddities seem related to things getting hit with giant rocks, these discoveries might help us finally get around to deciding what to do if an asteroid comes our way.

Tags
cosmosnasaplanetsspaceuniverse
In this article
cosmosnasaplanetsspaceuniverse
Related
The Universe in 90 minutes: The Multiverse, time, free will, God, & more
Everything you ever wanted to know about the Universe, explained by physicist Sean Carroll.
▸
1:33:47 min
—
with
Sean Carroll
Life
“I went to space and discovered an enormous lie”
What astronaut Ron Garan saw in space changed his life forever – here’s what it taught him.
▸
8 min
—
with
Ron Garan
Videos
The true story behind Carl Sagan’s cult classic, Contact
Do aliens dream about meeting us, too?
▸
with
Jill Tarter
Videos
NASA astronaut explains humanity’s trajectory to Mars
The first human that isn’t an Earthling could be in our lifetime.
▸
5 min
—
with
Robert Curbeam
How Earth’s 23.4° tilt makes life beautiful
Rituals come as much from religion as they do from the way Earth spins around the Sun.
▸
4 min
—
with
Sasha Sagan
Up Next
Neuropsych
What blinking slowly means to cats, according to science
Scientists confirm that slow blinks are an effective way to connect with a cat.