An asteroid that resembles a human skull will fly past Earth after Halloween this year.

The asteroid — whose nicknames include “Death Comet” and “Great Pumpkin,” among others — was first discovered in October 2015 by astronomers using the Pan-STARRS1 telescope in Hawaii shortly before it flew past Earth on October 31, 2015. 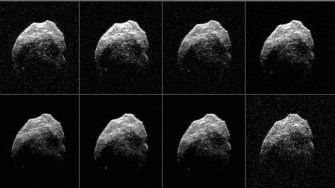 On November 11, 2018, the Death Comet is expected to pass Earth at the much farther distance of 24 million miles away. But with a diameter of just 2,000 feet, it’ll be too small and distance to see with the naked eye. Some scientists think the asteroid, which passes Earth every 3.04 years, could be a dead comet. That is, its volatiles may have been stripped over time from the heat of the sun.

“We found that the object reflects about six percent of the light it receives from the sun,” Vishnu Reddy, a research scientist at the Planetary Science Institute, said in a 2015 news release. “That is similar to fresh asphalt, and while here on Earth we think that is pretty dark, it is brighter than a typical comet which reflects only three to five percent of the light. That suggests it could be cometary in origin ― but as there is no coma evident, the conclusion is it is a dead comet.”

Although the Death Comet is classified as potentially hazardous, astronomers say there’s no chance it’ll collide with Earth. In 2088, the Death Comet is expected to make another (relatively) close flyby at a distance of 5.4 million miles.

Reality is more distorted than we think.
▸
with
Big Think
Up Next
Hard Science

Flat Earth theory has enjoyed staying power since at least the 19th century despite being patently untrue. Neil deGrasse Tyson, the late Carl Sagan, Bill Nye the Science Guy, and other big thinkers will show you how to disprove this bad idea, all without having to take a journey into space.