Before last evening, July 14, 2020, the easiest way to see Comet NEOWISE — the brightest comet to zoom past Earth since 1977’s Comet Hale-Bopp — from the United States was to catch it about an hour before sunrise. Now, however, you can see it in the evening, where it will remain for until the 19th. This is a definite don’t-miss event — NEOWISE won’t be coming back our way for another 6,800 years. It’s the first major comet of the millennium, and by all accounts, it’s unforgettable.

Comet NEOWISE is named after the NASA infrared space telescope that first spotted it on March 27th. Its official moniker is C/2020 F3. It’s estimated that the icy comet is about three miles across, not counting its tail.

NEOWISE is now heading away from our Sun, having made it closet approach, 27.4 million miles, to our star on July 3. The heat from that encounter is what’s given NEOWISE its tail: It caused gas and dust to be released from the icy object, creating the tail of debris that looks so magical from here.

As NEOWISE moves closer to Earth, paradoxically, it will be less and less visible. By about July 23rd, you’ll need binoculars or a telescope to see it at all. All of which makes this week prime time. 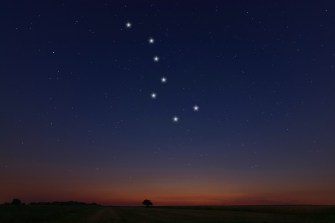 First, find an unobstructed view of the northwest sky, free of streetlights, car headlights, apartment lights, and so on. And then, according to Sky & Telescope:

“Start looking about one hour after sunset, when you’ll find it just over the northwestern horizon as the last of twilight fades into darkness.”

It should be easy to spot since it’s near to one of the most recognizable constellations up there, the Big Dipper. “Look about three fists below the bottom of the Big Dipper, which is hanging down by its handle high above, and from there perhaps a little to the right.” Et voilà: Comet NEOWISE.

The comet should be visible with the naked eye, though binoculars and a simple telescope may reveal more detail.

You may also be able to snap a photo of this special visitor, though you’ll need the right gear to do so. A dedicated camera is more likely to capture a good shot than a telephone, but in either case, you’ll need a tripod or some other means of holding the camera dead still as it takes a timed exposure of several seconds (not all phones can do this).

This short story is a fictional account of two very real people — Anaximander and Anaximenes, two ancient Greeks who tried to make sense of the universe.
Up Next
Starts With A Bang

Astronomy’s Most Perfect Ring Galaxy, Hoag’s Object, Is Still A Mystery After 70 Years