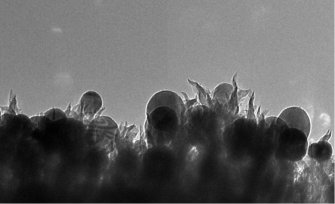 A photomicrograph of the ORNL catalyst showing the carbon nanospikes that can convert carbon dioxide into ethanol. Credit: ORNL

The Department of Energy has spent years trying to reduce the amount of carbon dioxide in our atmosphere. Carbon dioxide, or C02, is released into our atmosphere from both our breathing and as a byproduct of industrial combustion from fossil fuel. It’s also a greenhouse gas, meaning it traps heat and warms the temperature of the planet. In fact, it is “the primary greenhouse gas emitted through human activities,” according to the Environmental Protection Agency. “In 2014, CO2 accounted for about 80.9% of all U.S. greenhouse gas emissions.” That means it’s the biggest culprit of climate change, and the one scientists are trying hardest to stop.

Scientists are trying everything from storing it underground to converting it into a cleaner fuel source. Scientists at Oak Ridge National Laboratory (ORNL) accidentally figured out a way to do the latter by converting C02 into ethanol – a cleaner, more sustainable fuel source.

Strange as that sounds, carbon dioxide can be chemically converted into fuel. It’s difficult to do, as it is “chemically unreactive,” as the Department of Energy (DOE) reports. Carbon dioxide needs a catalyst, “a particular compound that could make carbon dioxide react more readily. When converting carbon dioxide from the atmosphere into a sugar, plants use an organic catalyst called an enzyme,” the DOE continues. The researchers at ORNL used “a catalyst made of carbon, copper and nitrogen and applied voltage to trigger a complicated chemical reaction that essentially reverses the combustion process,” they explain in a press release. In order to activate carbon dioxide at the molecular level, they utilized nanotechnology. Popular Mechanicsexplains the process as “a new combination of copper and carbon arranged into nanospikes on a silicon surface. The nanotechnology allows the reactions to be very precise, with very few contaminants.” The researchers expected the carbon nanospikes to be the first step in a long process, but were pleasantly surprised to discover it was the only step they needed. They explain the full details in the journal Chemistry Select, but here’s a video version:

“By using common materials, but arranging them with nanotechnology, we figured out how to limit the side reactions and end up with the one thing that we want,” researcher Adam Rondinone said in the ORNL press release. He explained the process further to New Atlas, stating that “a process like this would allow you to consume extra electricity when it’s available to make and store as ethanol. This could help to balance a grid supplied by intermittent renewable sources.”

That is a big deal, because ORNL’s process chemically negates a harmful substance with common materials and only 1.2 volts of electricity – and it works at room temperature, meaning “it can be started and stopped easily with little energy cost,” Popular Mechanics explains. They point out another additional benefit, too: the process could also be used “as temporary energy storage during a lull in renewable energy generation, smoothing out fluctuations in a renewable energy grid.”

ORNL has essentially created a way to remove large amounts of carbon dioxide from our atmosphere in a cheap, efficient, scalable way, which the team hopes could be used to mitigate or completely reverse fossil fuel carbon dioxide production. They’re working on refining their methods to “increase ethanol production rates and to better determine the full mechanism of selective chemical production of the copper/carbon catalyst,” according to New Atlas.

Hopefully, they’ll develop a system that’s easy for industrial producers to use. If they do, and if our government signs off on it, this process might just be the next big step in reducing climate change.

Tags
carbon dioxideclimate changeco2Environmental Protection Agencyethanolglobal warminggreenhouse gas emissionsOak Ridge National Laboratory
In this article
carbon dioxideclimate changeco2Environmental Protection Agencyethanolglobal warminggreenhouse gas emissionsOak Ridge National Laboratory
Related
Hard Science
Wandering icebergs could trigger tsunamis
Icebergs aren’t just a threat to unsinkable ships. Their ability to cause underwater landslides poses a danger to coastal cities.
The Past
Busting the Easter Island myth: there was no civilization collapse
For decades, researchers have proposed that climate change and human-caused environmental destruction led to demographic collapse on Easter Island. That’s probably false, according to new research.
Hard Science
New research finds that reforesting Europe would increase rainfall, fighting a drying trend
Trees store carbon dioxide, have a cooling effect in cities, and reduce flood risks.
The Future
Say goodbye to air conditioning with new roofing material
The guilt-free air conditioning, called “cooling paper,” is made from recyclable paper and doesn’t use any electricity.
The Present
57% of U.S. structures lie within a natural “hazard hotspot”
A new study mapped areas of the U.S. that are most likely to suffer natural disasters.
Up Next
Starts With A Bang
How far away are the stars?
Scientists still don’t know, but the answer could hold the key to the expanding, accelerating Universe.“Scratch a cynic and you’ll find a disappointed idealist.” –Jon F. MerzWhen you look up […]