Quantum mechanics has produced its share of weird ideas, not least of which is what’s probably the world’s most famous thought experiment devised by physicist Erwin Schrödinger in 1935. It described the uncertain fate of a cat trapped in a box with a deadly substance. Now the experiment got an update from two physicists, leading to conclusions that threaten to undermine the foundations of the whole field.

By replacing the cat in the box with multiple physicists doing experiments, the duo of Daniela Frauchiger and Renato Renner of the Swiss Federal Institute of Technology (ETH) in Zurich has caused heated debates among physicists for the past two years.

Schrödinger’s original idea proposed that if you put a cat in a box, along with a possibly decaying radioactive substance which would release a killer acid, the cat could be both alive and dead until that box was opened, fixating its state. Schrödinger devised this scenario to point to inconsistencies in the so-called Copenhagen interpretation of quantum mechanics, created by Niels Bohr and Werner Heisenberg in the 1920s.

The interpretation states that a quantum particle can exist in all possible states until an observer forces what’s called “the wave function collapse”, making the particle choose one probable state. Unfortunately, as Schrödinger showed, this theory may work on the quantum level but when applied to larger objects like cats, it becomes somewhat ridiculous and impossible—the cat cannot be both alive and dead.

Still, the Copenhagen interpretation has persisted, in part due to saying that while quantum objects may exist in uncertain states, experimental observation can give certain results. It is that certainty which the new thought experiment has attacked. 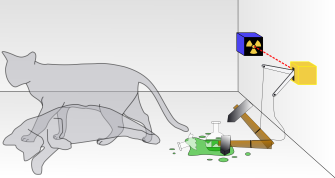 Diagram for the Schrödinger’s cat thought experiment, showing the radioactive substance and the hammer that will potentially be dropped to spill the acid, thereby killing the cat.

The conceptual experiment by the scientists from Zurich involves putting two physicist cats into boxes. One cat would toss a coin and using its knowledge of quantum physics send a message to the other cat. That second cat, in its turn, would also employ quantum theory but to detect the message from the other cat and guess the coin toss. If two outside observers were to open these boxes, they would some times be able to guess with certainty how the coin landed but on occasion their conclusions would not agree.

That’s like implying reality can split in two on occasion. 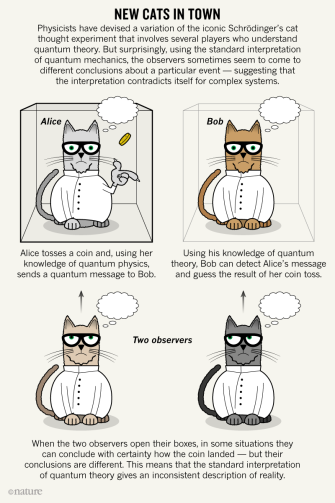 This paradox has stumped other scientists as well. “I think this is a whole new level of weirdness,” said Matthew Leifer, a theoretical physicist at Chapman University in Orange, California to Nature magazine.

There is a potential way this experiment can actually be carried out, but it would involve quantum computers that are not in existence yet.

The scientists originally published their argument online in 2016. Check out their final paper “Quantum theory cannot consistently describe the use of itself” from September 2018 in Nature magazine.

Philosophers and scientists spent millennia arguing about the nature of light. It turned out to be stranger than anyone imagined.
Up Next
Starts With A Bang

The Future Of Gravitational Wave Astronomy

A new Starts With A Bang podcast brings on an expert for an unforgettable conversation.Once a month, as part of our Patreon, we put together a podcast on a scientific […]