Life on Earth is likely facing its sixth mass extinction. The UN Environment Programme estimates that 150 to 200 species of plant, insect, bird or mammal become extinct every day – about 1,000 times the “natural rate,” according to some biologists.

So how can we stop extinction?

One solution scientists have been developing for decades is de-extinction — the process of resurrecting extinct species through genetic engineering. The idea was made popular when an ancient mosquito with a bellyful of dinosaur DNA enabled the resurrection of a Tyrannosaurus rex in 1993’s Jurassic Park. But now that de-extinction could soon be a viable option for biodiversity conservation, some researchers are saying it could threaten extant endangered species. 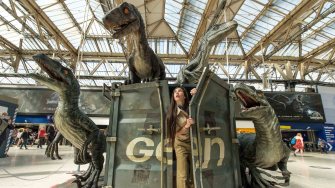 A dinosaur attendant emerges from a shipping container surrounded by dinosaurs during the ‘Jurassic World’. (Photo by Ian Gavan/Getty Images)

“On one hand, we can bring back the dead and right past wrongs,” study co-author Joseph Bennett, a conservation biologist at Carleton University in Canada, said to Popular Science. “On the other hand, there are many species going extinct every year, and our resources to help save them are severely limited.”

“Given the considerable potential for missed opportunity, and risks inherent in assuming a resurrected species would fulfill its role as an ecosystem engineer or flagship species, it is unlikely that de-extinction could be justified on grounds of biodiversity conservation,” said co-author Hugh Possingham to University of Queensland News.

One reason for the steep price tag is that threats that led to the resurrected species’ extinction – say, predators – would likely still exist.

“Another reason for their higher cost is that we considered captive breeding and re-introduction, which are not necessary for most existing species,” Bennett said. 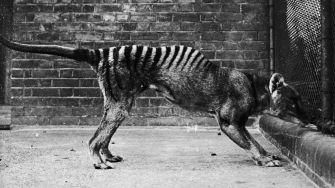 A thylacine or ‘Tasmanian wolf’, or ‘Tasmanian tiger’ in captivity, circa 1930. These animals are thought to be extinct, since the last known wild thylacine was shot in 1930 and the last captive one died in 1936. (Photo by Topical Press Agency/Hulton Archive/Getty Images)

Researchers applied their estimated costs in hypothetical funding scenarios in which government or private organizations paid for the conservation of resurrected species. When they resurrected one extinct species in the government-funded scenario, it usually led to the extinction of many other endangered species due to competition over funding. Notably, one resurrected species – the extinct Forbes’ snipe – produced a net biodiversity benefit because it shares conservation needs with some currently endangered species in the area.

Conversely, the privately funded scenario resulted in a biodiversity gain. Researchers noted, however, that private organizations could save two to eight times more species if they spent the same amount of money toward existing conservation programs.

Despite the findings, de-extinction might still play a valuable in conservation. As ecologist Ben Novak points out in Popular Science, the consequences of de-extinction would vary from place to place. Also, some private donors might be exclusively interested in de-extinction technology, not necessarily conservation. In a Science article, Bennett talks about a hypothetical billionaire donor. 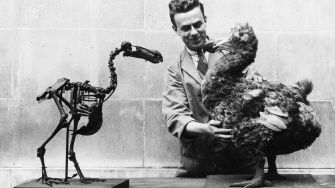 4th March 1938: A Dodo skeleton opposite a reconstructed model of the extinct bird in the National Museum of Wales, Cardiff. (Photo by Becker/Fox Photos/Getty Images)

“If that billionaire is only interested in bringing back a species from the dead, power to him or her. However, if that billionaire is couching it in terms of it being a biodiversity conservation, then that’s disingenuous. There are plenty of species out there on the verge of extinction now that could be saved with the same resources.”

Douglas McCauley, an ecologist at University of California, Santa Barbara, who was not involved in the study, remains skeptical of de-extinction’s role in conservation.

“The dominant message in this analysis appears to be that doing de-extinction en masse would be counterproductive,” McCauley told Science. “If this is ethically messy, ecologically awkward, and now also really expensive—I’m out.”

Although there have been frenzied headlines in past years exclaiming how we’re just a couple years away from resurrecting a wooly mammoth, chances are de-extinction technology still has a ways to go. In the meantime, McCauley has a few guidelines for scientists interested in de-extinction. He thinks scientists should choose to resurrect species that went extinct recently, aren’t functionally redundant to the ecosystem, and could reproduce to reach meaningly population levels.

Tags
climate changeconservationconservation fundingde-extinctionextinctextinctionjurassic parkspecies
In this article
climate changeconservationconservation fundingde-extinctionextinctextinctionjurassic parkspecies
Related
The Present
National parks are great. Now, let’s create a World Park
To preserve biodiversity and ecosystems, protected areas should be connected into a gigantic World Park.
Life
Is saving the panda a waste of time and money?
It is difficult to save a species that does not seem to care about saving itself.
The Present
Meet the world’s first ‘digital species’ for conservation
The Seychelles magpie-robin is up for sale – yes, for sale – as a digital nature collectible.
Hard Science
Wandering icebergs could trigger tsunamis
Icebergs aren’t just a threat to unsinkable ships. Their ability to cause underwater landslides poses a danger to coastal cities.
The Past
Busting the Easter Island myth: there was no civilization collapse
For decades, researchers have proposed that climate change and human-caused environmental destruction led to demographic collapse on Easter Island. That’s probably false, according to new research.
Up Next
Technology & Innovation
Prominent Astrophysicist Calls the Big Bang A “Mirage”
Two mind-blowing theories offer a significant challenge to the accepted model.