Excitonium, a strange form of matter that was first theorized almost 50 years ago, has now been discovered by researchers.

What is excitonium? It is a rather exotic condensate that exhibits macroscopic quantum phenomena like a superconductor or a superfluid. It consists of excitons, particles formed from an unlikely pairing of an escaped electron and the hole it leaves behind. The hole actually behaves like a positively-charged particle itself. It attracts an electron and together they form the composite particle known as the exciton.

In their experiments on non-doped crystals of the transition metal dichalcogenide titanium diselenide (1T-TiSe2), the researchers were able to observe the material and its precursor soft plasmon phase, called “the smoking gun” that proves excitonium’s existence. The precursor phase emerges as the material approaches its critical temperature.

The scientists reproduced their results 5 times on different cleaved crystals during the testing, adding more confidence to the study.

What they achieved in particular is developing a new technique called momentum-resolved electron energy-loss spectroscopy (M-EELS) that is sensitive enough to distinguish the new material from Peierls phase, an unrelated substance that has the same symmetry. 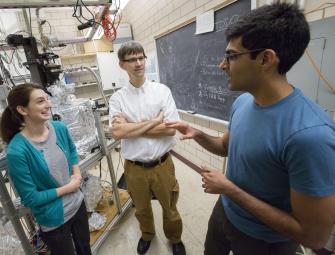 The research was led by Peter Abbamonte from University of Illinois at Urbana-Champaign, working with the graduate students Anshul Kogar and Mindy Rak, and receiving input from colleagues at Illinois, University of California, Berkeley, and University of Amsterdam.

Abbamonte put their discovery in a historical context:

“This result is of cosmic significance,” said Abbamonte. “Ever since the term ‘excitonium’ was coined in the 1960s by Harvard theoretical physicist Bert Halperin, physicists have sought to demonstrate its existence. Theorists have debated whether it would be an insulator, a perfect conductor, or a superfluid—with some convincing arguments on all sides. Since the 1970s, many experimentalists have published evidence of the existence of excitonium, but their findings weren’t definitive proof and could equally have been explained by a conventional structural phase transition.” 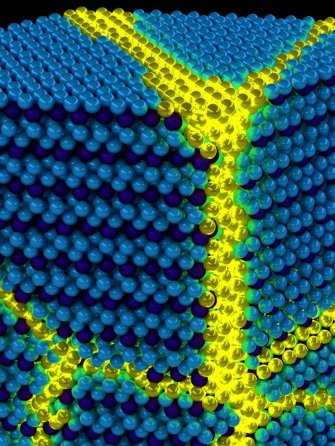 An artist’s depiction of the collective excitons in an excitonic solid. These excitations are propagating domain walls (yellow) in an ordered solid exciton background (blue). Credit: Peter Abbamonte, University of Illinois at Urbana-Champaign Department of Physics and Frederick Seitz Materials Research Laboratory.

The graduate student Kogar explained that discovering excitonium was not the original aim of the project but they’ll take it.

While the discovery gives us a more detailed understanding of another mystery of quantum mechanics, the practical applications of excitonium are currently in a speculative stage.

You can read the team’s paper here.

Philosophers and scientists spent millennia arguing about the nature of light. It turned out to be stranger than anyone imagined.
Up Next
Technology & Innovation

Another scintillating installment of Comment of the Week is here. Did you make the cut?