Since 1935, when it was first theorized, scientists have been trying to create metallic hydrogen, a new material with revolutionary potential applications. Now scientists from Harvard University published a paper in Sciencewhere they claim to have created it. If confirmed by further tests, the metallic hydrogen could become not only the rarest, but also one of the most valuable materials on Earth. Unfortunately, that precious metallic hydrogen sample – potentially the first of its kind – has just disappeared in the Harvard lab.

The scientists Isaac Silvera, Thomas D. Cabot Professor of the Natural Sciences, and post-doctoral fellow Ranga Dias, believe that what they created via high-pressure physics could have use as a superconductor, able to conduct electricity without loss at room temperature. If a reasonable way to produce this material will be found, its uses can extend to the electrical grid, maglev trains and superfast space travel.

Isaac Silvera has been working on this problem for 45 years. What he and Ranga Dias did to produce their groundbreaking atomic metallic hydrogen was to compress hydrogen gas in a diamond anvil. They then solidified it at very low temperatures and kept slowly increasing the pressure on the anvil by turning the screw. As reported by Harvard Magazine, once they reached 4 million atmospheres, greater than the pressure at the center of Earth, the transparent hydrogen turned black. At 4.95 million atmospheres, it had become a metal, reflecting 90% of light the scientists shined at it.

“This is the holy grail of high-pressure physics,” said Silvera. “It’s the first-ever sample of metallic hydrogen on Earth, so when you’re looking at it, you’re looking at something that’s never existed before.” 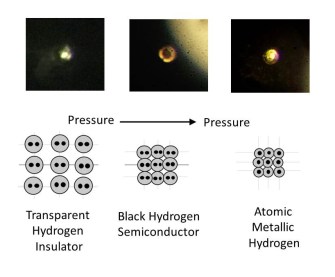 Now the scientists will wait a few weeks until beginning to test whether the new material is stable at normal pressures and room temperatures. Basically, it needs to remain in metallic form once the special conditions that produced it are removed. Right now you can only see this tiny piece of metal through the diamonds used to create it.

Once they ease the pressure, they will know if the material will remain stable, something predicted only in theory.

“That means if you take the pressure off, it will stay metallic, similar to the way diamonds form from graphite under intense heat and pressure, but remains a diamond when that pressure and heat is removed,” explained Silvera.

Here’s a video featuring interviews with the scientists:

What will be the benefits of metallic hydrogen if the physicists can show the stability of their metal and be able to recreate it?

“As much as 15 per cent of energy is lost to dissipation during transmission, so if you could make wires from this material and use them in the electrical grid, it could change that story,” pointed out Silvera.

“The most romantic application of superconductivity,” Dias said, would be “magnetic levitation of high-speed trains, based on the perfect diamagnetism of superconductors.”

This would create a repulsive magnetic force, with much potential to disrupt the transportation industry.

What’s more, NASA has provided some of Silvera’s funding in hopes that metallic hydrogen could be used as rocket propellant.

“It takes a tremendous amount of energy to make metallic hydrogen,” said Silvera. “And if you convert it back to molecular hydrogen, all that energy is released, so it would make it the most powerful rocket propellant known to man, and could revolutionize rocketry, enabling you to explore the outer planets, to put rockets into orbit with a single stage, and lift large payloads.”

In fact, this release of energy would make metallic hydrogen 4 times as powerful as existing fuels.

First predicted by physicists Hillard Huntington and Eugene Wigner in 1935, there have been failed attempts to create metallic hydrogen previously, with the race to make it tightening between a number of teams. Since there is such potential for this to be a transformative accomplishment, some scientists have taken Silvera and Dias to task for not providing more details at this stage.

“I don’t think the paper is convincing at all,” said Paul Loubeyre, a physicist at France’s Atomic Energy Commission in Bruyères-le-Châtel, to Nature.

Other scientists are wondering how this team accomplished something that others have not yet been able to approach.

Dias and Silvera defended their work, saying that their accomplishment rests on utilizing novel techniques, improving on previous research. In particular, they figured out how to use greater pressures than anyone else was able to before. They also managed to polish the tips of the diamonds they used in a way that prevented them from breaking, an issue at such pressures.

“If we did it again, we’d get the same result, I’m certain,” said Dr. Silvera.

The editor of the magazine Science, which published their paper, also weighed in, saying that all papers must pass great scrutiny when peer-reviewed by experts and only 7% make it to publication.

Another scientist, geophysicist Alexander Goncharov of the Carnegie Institution for Science in Washington, has questioned whether the created material might actually be alumina (aluminum oxide) which is used on the tips of the diamonds the experiment.

“If they want to be convincing, they have to redo the measurement, really measuring the evolution of pressure,” said Loubeyre. “Then they have to show that, in this pressure range, the alumina is not becoming metallic.”

The Harvard scientists also have supporters in the scientific community.

“I think there’s a good chance that it’s correct,” said theoretical physicist David Ceperley of the University of Illinois at Urbana-Champaign.

While there are some doubters, as Professor Silvera said himself: “I don’t want to guess, I want to do the experiment.” He feels accomplished already in figuring out the precise pressure at which hydrogen becomes a metal.

The moment when the scientists made their breakthrough speaks to the joy of scientific discovery. Here’s how Silvera described it:

“Ranga was running the experiment, and we thought we might get there, but when he called me and said, ‘The sample is shining’, I went running down there, and it was metallic hydrogen. I immediately said we have to make the measurements to confirm it, so we rearranged the lab … and that’s what we did.

It’s a tremendous achievement, and even if it only exists in this diamond anvil cell at high pressure, it’s a very fundamental and transformative discovery.”

You can read their study here, in Science magazine.

2/27 UPDATE: the only metallic hydrogen sample in the world has disappeared – the Harvard team plans to start the process again and continue its research.

Tags
breakthroughdiscoveryharvard universitymetallic hydrogennasaphysicsrevolutionaryrocket fuelsciencesuperconductortransportation
In this article
breakthroughdiscoveryharvard universitymetallic hydrogennasaphysicsrevolutionaryrocket fuelsciencesuperconductortransportation
Related
The Well
This is what the fourth dimension looks like
Left–Right, Back–Forth, Up–Down. What’s the fourth dimension?
▸
3 min
—
with
Brian Greene
The Past
Here is the most terrifying pterosaur ever discovered
Meet your new flying nightmare: Thapunngaka shawi.
The physics of entropy and the origin of life
How did complex systems emerge from chaos? Physicist Sean Carroll explains.
▸
6 min
—
with
Sean Carroll
The Universe in 90 minutes: The Multiverse, time, free will, God, & more
Everything you ever wanted to know about the Universe, explained by physicist Sean Carroll.
▸
1:33:47 min
—
with
Sean Carroll
The Past
How people crossed the Atlantic Ocean before commercial aviation
For centuries, the only way to travel between the Old and New World was through ships like the RMS Lusitania. Experiences varied wildly depending on your income.
Up Next
Surprising Science
The Early Days of Organ Farming Are a Bit Gnarly
University of California, Davis researchers announce the disappointing results of their implantation of human stem cells in pigs.