As the 2019 California earthquakes remind us, these natural events can be quite nerve-racking and dangerous. Potential for terrible destruction is always just a tremor away. That’s probably the worst thing about earthquakes – they come out of nowhere and cause the most mayhem simply because of their sheer suddenness. Predicting earthquakes would save lives and property, and a recent study hopes to accomplish just that.

Seismologists Diego Melgar and his colleague Gavin P. Hayes were at first looking for databases to simulate the magnitude 9+ Cascadia megaquake of 1700. But they ended up discovering a very peculiar pattern. They employed data collections of earthquakes going back to the early 1990s and their background in geophysics to spot a specific moment, happening 10-15 seconds into an earthquake event. That moment, derived from GPS data, can indicate a quake of magnitude 7 or larger.

The scientists used GPS information, in particular, because it caught even the smallest initial movements along a fault, showing the strongest acceleration of ground movement. The seismologists identified a pattern in the data called “a slip pulse” that happened during the transition period, when displacement between two plates was taking place. The top rate of that displacement predicted if the quake would be small or go mega, found the researchers.

How did they know they were on the right track? The scientists performed physics-heavy analysis of numerous databases of 3,000+ earthquakes to confirm their methodology. They correctly picked out all 12 quakes of 7+ magnitude from the early 1990s till now in two U.S. Geological Survey databases. They also hit upon the same pattern in European and Chinese databases, reports a University of Oregon press release.

“It was super exciting,” shared Melgar. “As Gavin and I pored through the data for what were really unrelated reasons, we began to see these trends. We had a bit of a eureka moment where we, well, if what we’re seeing is true, it means something about how earthquakes start.” 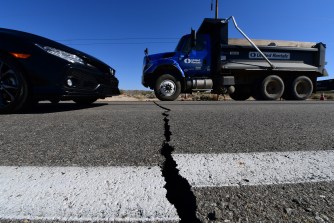 Vehicles driving over a crack on Highway 178, near Trona. This follows a 6.4-magnitude earthquake in Ridgecrest, California on July 4, 2019.

The scientists think their research can lead to a greater amount of GPS stations to improve early warning system, especially ShakeAlert, along the West Coast. The sensors can be placed on the seafloor to counter the delay in relaying valuable quake information.

“We can do a lot with GPS stations on land along the coasts of Oregon and Washington, but it comes with a delay,” Melgar explained. “As an earthquake starts, it would take some time for information about the motion of the fault to reach coastal stations. That delay would impact when a warning could be issued. People on the coast would get no warning because they are in a blind zone.”

Melgar’s previous work on real-time GPS data found it could give an extra 20 minutes of warning in cases of tsunamis.

Diego Melgar is a researcher at the University of Oregon, while Gavin P. Hayes is a seismologist with the USGS National Earthquake Information Center in Colorado.

Read their study in Science Advances.

The new agency wants to push the boundaries of science and technology.
The Past

Why the Model T was Henry Ford’s epic poem

Anything, good or bad, about Henry Ford can be contradicted — except his ambition and his work.
The Present

The Rubbee X requires almost no setup and is far cheaper than a brand new e-bike.
Up Next
Life

Spiders, fish, birds, and bats all break with their daily routines.