That odd-shaped visitor from beyond our solar system, ‘Oumuamua (Hawaiian for “scout”), has been fascinating from the moment it arrived: It’s a spaceship, it’s a rock, it’s a comet, it’s not a comet. But is it a spaceship? That’s where its behavior has some scientists at Harvard leaning; they suggest it may be a device of some kind powered by a lightsail, or a piece of one.

What’s got experts so puzzled about ‘Oumuamua is, as an about-to-be-published paper says: “‘Oumuamua showed deviations from a Keplerian orbit at a high statistical significance.” In English: It sped up as it approached the Sun. Comets can do this, but ‘Oumuamua has been disqualified as an active comet, as it has no tail. Shmuel Bialy and Abraham Loeb, the authors of the paper, propose that the increase in speed could be due to “solar radiation pressure.” The bottom line, they say, is that the discrepancy “is readily solved if ‘Oumuamua does not follow a random trajectory but is rather a targeted probe.” The paper discusses the math involved and finds that its “general results apply to any light probes designed for interstellar travel.” 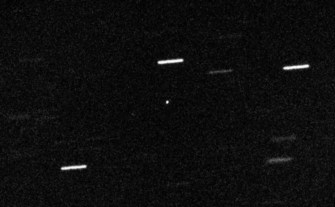 That dot in the center is an actual image of ‘Oumuamua.

What we saw is what we get

‘Oumuamua’s gone from our view at this point, so any analysis of it or its movements is limited to the data collected during its period of observability. It was first spotted from the PAN-STARRS telescope on Maui (hence its Hawaiian name) on October 19, 2017, and by January 2018 it was gone. Any conclusions we draw have no way of being tested now.

At the time, ‘Oumuamua was scanned for radio waves — a basic means of communicating which we assume/hope is the universe’s lingua franca — and no radio waves were found, leading observers away from suspicions that its origin could be an alien civilization.

At first, ‘Oumuamua was assumed to be an asteroid, but its subtle gain in speed as it drew near the Sun suggested a comet, and it still could be one, though of a kind with which we’re unfamiliar. Comets accelerate near the Sun because, as NASA puts it, “Light and other radiation from the Sun push on the gas and dust in the coma, blowing the material away to form a tail that can be millions of kilometers long.” The problem with ‘Oumuamua is that it had no observable tail. In fact, we couldn’t see it that well at all. As you can see in the photo above. 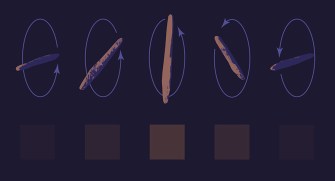 We’re all familiar with the shape ascribed to ‘Oumuamua, as seen at the top of this article, but since the images really captured of ‘Oumuamua showed it as a far-away dot, its presumed shape is a mathematically derived guess based on the way its brightness fluctuated, suggesting a tumbling, elongated object 10 times as long as it was wide. (Current calculations put ‘Oumuamua at about 800 meters long.) The rest of its appearance was likewise deduced by its behavior. What many take to be its true appearance is just an artist’s conception. So, we’re used to feeling like we know what ‘Oumuamua looked like, but we don’t really know. If you find yourself thinking, “it sure doesn’t look like an alien device,” well, maybe.

Is ‘Oumuamua a lightsail that remains from a larger craft?

The paper offers two theories, either of which would explain ‘Oumuamua’s odd acceleration. The first is that, “‘Oumuamua is a lightsail, floating in interstellar space as a debris from an advanced technological equipment. Lightsails with similar dimensions have been designed and constructed by our own civilization, including the IKAROS project and the Starshot Initiative.” Citizen-funded Planetary Society plans to launch one, simulated in the gif above, soon.

A lightsail is a device that uses in-space energy to propel craft via solar pressure. It uses the momentum from solar photons striking a large, thin, reflective sail. What’s so interesting about craft powered by lightsail is that they can pick up the energy they need as they travel, rather than storing heavy fuel onboard.

Could ‘Oumuamua be an actual probe deliberately sent here?

“A more exotic scenario is that ‘Oumuamua may be a fully operational probe sent intentionally to Earth vicinity by an alien civilization,” suggests the paper. Apparently, if there were a lot of naturally occurring objects like ‘Oumuamua, we’d be seeing lots of them. And we’re not.

Two experts from SETI weigh in. And disagree.

Siemion termed the paper “intriguing,” telling The Globe that, “Observational anomalies like we see with ‘Oumuamua, combined with careful reasoning, is exactly the method through which we make new discoveries in astrophysics — including, perhaps, truly incredible ones like intelligent life beyond the Earth.” However, in an email to NBC, Shostak warned, “one should not blindly accept this clever hypothesis when there is also a mundane explanation for ‘Oumuamua — namely that it’s a comet or asteroid from afar.”

Hey Bill Nye! How Did You Come Up With the Idea for …

LightSail: An experiment over 35 years in the making

The key problem with the dark matter hypothesis is that nobody knows what form dark matter might take.
Videos

The Royole Corporation beat Samsung to the punch when it recently released the world’s first commercially available folding smartphone.