Russian President Vladimir Putin recently declared a state of emergency after an industrial accident spilled more than 20,000 tons of diesel into the Arctic environment.

The accident occurred when a fuel tank collapsed at a power plant on May 29 in the Siberian city of Norilsk, located 1,800 miles northeast of Moscow. At least 17,000 tons of diesel fuel spilled into the Ambarnaya River, turning it crimson, while another 6,000 tons leaked into the soil.

Greenpeace Russia said it’s the “first accident of such a scale in the Arctic,” comparing it to the Exxon Valdez oil spill off the coast of Alaska in 1989. That accident spilled 39,000 tons of fuel into the Pacific Ocean.

On Thursday, Russian officials said the leak had been contained with booms placed in the river.

“We have stopped the spread of the petroleum products,” a spokesperson for the task-force in charge of the clean-up said. “They are contained in all directions, they are not going anywhere now.”

Although the spill is contained, the accident likely caused long-term damage to the environment. 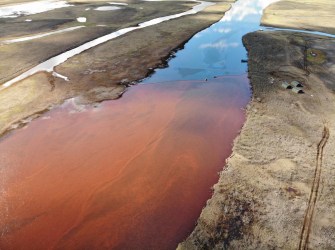 “The incident led to catastrophic consequences, and we will be seeing the repercussions for years to come,” Sergey Verkhovets, coordinator of Arctic projects for WWF Russia, said in a statement. “We are talking about dead fish, polluted plumage of birds and poisoned animals.”

Greenpeace said the clean-up won’t do much good:

“The booms that were set up will only collect an insignificant part of the pollution, so we can assert that almost all of the diesel fuel will remain in the environment.”

Norilsk Nickel, the owner of the power plant, said the fuel tank collapsed because of “abnormally mild temperatures” in the permafrost.

“The company is working painstakingly to understand what happened ... we suspect that abnormally mild temperatures caused the permafrost beneath the support to thaw, and even a slight skewing in weight distribution would lead to the structure’s collapse due to the tank’s weight.“ pic.twitter.com/C7mUUHTRLH

Alexei Knizhnikov, a leader with the Russian arm of the World Wildlife Fund, said that while climate change is affecting the nation’s permafrost, the company could’ve prevented the accident if it had followed proper protocol. Russian law requires companies to install containment structures around fuel reservoirs.

“A lot of the blame lies with the company,” Knizhnikov said.

During a teleconference on Wednesday, Putin criticized a Norilsk Nickel manager over the company’s handling of the accident.

“I think decontamination will cost Nornickel billions of roubles, but I’m speaking not as a businessman, but as a human being concerned about the situation: whatever the cost, we will pay it,” said Nornickel’s CEO Vladimir Potanin in a televised call with Russian president Putin. pic.twitter.com/IoD2mfvKge

“Why did government agencies find out about this only after two days?” Putin asked. “Are we going to find out about emergencies from social media now?”

Norilsk Nickel president Vladimir Potanin said the company would pay the costs of cleaning up the skill, estimated to be $146 million. At least one worker at the power plant has so far been arrested. He’s charged with violating environmental regulations and faces up to five years in prison.

Russia, the world’s fourth-largest emitter of greenhouse gases, is especially vulnerable to the effects of climate change. The nation is warming two and a half times faster than the rest of the planet, and in recent years it’s suffered costly floods and wildfires.

Thawing permafrost in Siberian regions poses a major threat to Russia’s oil industry, which is the world’s third largest. One key reason, as evidenced by last week’s accident, is that melting permafrost jeopardizes the structural integrity of oil-field infrastructure.

Of course, when oil infrastructure is jeopardized, so is the environment. That’s why Greenpeace Russia is calling for increased environmental regulations and unscheduled audits of oil producers in the nation’s Arctic region.

“Environmental control should be strengthened, and the operation of facilities should be under special control to prevent accidents, especially in the conditions of melting permafrost due to global climate change,” the organization said in a statement.

A floating platform the size of Rome collapsed off of Antarctica.
Up Next
The Present

Does rioting work? Here are five times it did.

Expert opinion is divided on how effective riots can be on causing social change. However, these five examples show they can do something.