The 2020 Nobel Prize in Physics has been awarded to three scientists who advanced the world’s understanding of black holes — the mysterious regions of spacetime from which nothing can escape.

Roger Penrose, a British mathematical physicist, was awarded half of the $1.1 million prize. The other half was awarded to Reinhard Genzel, a German astrophysicist, and Andrea Ghez, an American astronomer.

The Nobel Committee for Physics said Penrose, 89, won the prize “for the discovery that black hole formation is a robust prediction of the general theory of relativity,” while Genzel and Ghez (68 and 55, respectively) won for “the discovery of a supermassive compact object at the centre of our galaxy.”

BREAKING NEWS:
The Royal Swedish Academy of Sciences has decided to award the 2020 #NobelPrize in Physics with one half to Roger Penrose and the other half jointly to Reinhard Genzel and Andrea Ghez. pic.twitter.com/MipWwFtMjz

“The discoveries of this year’s Laureates have broken new ground in the study of compact and supermassive objects,” David Haviland, chair of the Nobel Committee for Physics, said in a statement. “But these exotic objects still pose many questions that beg for answers and motivate future research. Not only questions about their inner structure, but also questions about how to test our theory of gravity under the extreme conditions in the immediate vicinity of a black hole.”

Penrose, a professor at the University of Oxford, used “ingenious mathematical methods” to show that black holes are a direct consequence of Einstein’s theory of general relativity, the committee wrote. (Einstein himself doubted that black holes existed in the real world.)

How a black hole is formed (see figure).

The 2020 #NobelPrize in Physics has been awarded with one half to Roger Penrose and the other half jointly to Reinhard Genzel and Andrea Ghez. pic.twitter.com/OcCngdQxfG

Together with the late theoretical physicist Stephen Hawking, Penrose helped to reinvigorate research on general relatively, largely by developing theories about singularities, which are believed to be a boundaries within black holes “at which all the known laws of nature break down.” The committee wrote that Penrose’s 1965 paper, which described the formation of black holes and singularities, “is still regarded as the most important contribution to the general theory of relativity since Einstein.”

“Singularity, that’s a place where the densities and curvatures go to infinity. You expect the physics go crazy,” Penrose told The Associated Press. “When I say singularity, that’s not really the black hole. The black hole prevents you from seeing the singularity. It’s the nasty thing in the middle. If you fall into a black hole, then you pretty well inevitably get squashed into this singularity at the end. And that’s the end.”

Since the early 1990s, Genzel and Ghez have been leading independent teams of astronomers that have helped develop techniques for capturing clearer images of the cosmos from Earth. The teams’ primary focus of study was what lies at the center of our galaxy, a region called Sagittarius A*. 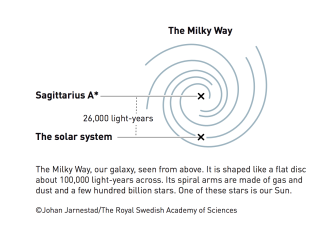 Using some of the world’s most sophisticated telescopes, Genzel and Ghez also discovered that one star in this region, known as S2 or S-O2, orbits the galaxy’s center in just 16 years. (Compare that to our Sun, which takes 200 million years to complete an orbit around the galaxy.) Measurements from both teams indicated that Sagittarius A* is about the size of our solar system, but is incredibly dense, containing roughly 4 million solar masses. This led them to conclude the center of our galaxy could be only one thing: a supermassive black hole.

Basic and breath-taking – Dr. Frank Wilczek addresses symmetry’s critical role in nature’s laws and what we consider to be beautiful.
▸
with
Frank Wilczek
Up Next
The Present

While it’s always been a boon to Popeye’s “muskles,” it looks like spinach may also have a role to play in clean future batteries.