Scientists working on the Large Hadron Collider discovered new particles whose unusual behavior doesn’t conform to the Standard Model of particle physics. The find may indicate the existence of entirely new particles or interactions and can result in new physics being formulated.

The Standard Model of particle physics, our best current theory, says that particles known as “beauty quarks” or “B mesons” should decay equally into muons or electrons. However, measurements from a new experiment on the Large Hadron Collider (LHC), the world’s largest scientific instrument and its most powerful particle accelerator based at the CERN lab on the Franco-Swiss border, show that is not taking place. B mesons decaying in the LHC produced more electrons and less muons than the theory predicted. These measurements may mean that new, yet-to-be-detected particles are contributing to the imbalance.

The research, carried out by physicists from Imperial College London and the Universities of Bristol and Cambridge, was part of the LHCb experiment, one of the four particle detectors at the Large Hadron Collider.

One of the study’s co-authors, Dr. Mitesh Patel from Imperial College, explained the significance of their achievement:

“We were actually shaking when we first looked at the results, we were that excited,” shared Patel in a press release. “Our hearts did beat a bit faster. It’s too early to say if this genuinely is a deviation from the Standard Model but the potential implications are such that these results are the most exciting thing I’ve done in 20 years in the field. It has been a long journey to get here.” 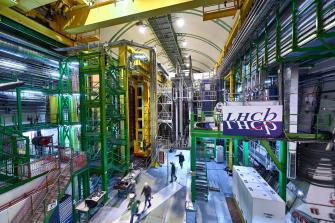 The LHCb experiment at the Large Hadron Collider at CERN. Credit: CERN

Imperial College Ph.D. student Daniel Moise, who was involved in the study, thinks the findings can lead to new discoveries:

“The result offers an intriguing hint of a new fundamental particle or force that interacts in a way that the particles currently known to science do not,” said Moise. “If this is confirmed by further measurements, it will have a profound impact on our understanding of nature at the most fundamental level.”

The scientists are looking next to verify their results in follow-up experiments.

This is not the only discrepancy with the Standard Model that physicists have uncovered. The nature of dark matter and the unequal distribution of matter and antimatter in the Universe have also been thrown wrenches into most accepted physics ideas.

Check out the new paper “Test of lepton universality in beauty-quark decays” published as a preprint.

No matter how hard we try, we will never reach a final theory that unifies scientific knowledge. The very nature of science doesn’t allow it.
Starts With A Bang

From high school through the professional ranks, physicists never tire of Newton’s second law.
Starts With A Bang

No matter how controversial or politicized our world becomes, science remains humanity’s best tool for figuring out how things work.
13.8

Quantum mechanics + consciousness: There is nothing better than mixing two great mysteries to produce an even bigger one.
Starts With A Bang

How the best alternative to “quantum spookiness” failed

Many still cling to the idea that we live in a deterministic Universe, despite the nature of quantum physics. Now, the “least spooky” interpretation no longer works.
Up Next
Hard Science

Not only does this give us a look at the scaffolding of the universe, we found some new galaxies too!