Since 1889, the definition of a kilogram has been the mass of one particular chunk of platinum-iridium alloy called the International Prototype Kilogram, stored at the International Bureau of Weights and Measures in Sèvres, France.

The cylindrical hunk of metal, nicknamed Big K, has many copies around the world that are used to calibrate scales and keep society in agreement on what constitutes a kilogram and other units of measurement. This helps the global economy to function smoothly.

But this system has a fundamental problem: Big K loses mass over time, about 50 micrograms since its creation, or the mass of an eyelash, as Vox reports. Strangely, when this happens, the definition of a kilogram stays the same. (After all, a kilogram is defined simply as the mass of Big K.) This causes headaches for industries and fields of study that have to account for the miniscule changes.

That’s set to change. On Friday morning, scientists at the General Conference on Weights and Measures in Versailles voted to change the definition of a kilogram, opting to affix it to a physical constant that will never change, whether you’re measuring it on Earth or light years away in the cosmos.

“Today marks the culmination of decades of work by measurement scientists around the world, the significance of which is immense,” said Barry Inglis, director of the International Committee for Weights and Measures. “We will now no longer be bound by the limitations of objects in our measurement of the world, but have universality accessible units that can pave the way to even greater accuracy, and even accelerate scientific advancement.”

IT’S OFFICIAL – the science community has voted! All of the SI units will be defined by fundamental constants of nature as of 20 May 2019! #SIRedefinition http://www.npl.co.uk/news/international-system-of-units-overhauled-in-historic-vote …pic.twitter.com/xpcddbAAmV

Starting May 2019, a kilogram will be defined in terms of Planck’s constant, a fundamental constant in quantum physics that links the amount of energy a photon carries with the frequency of its electromagnetic wave.

Here’s a relatively simplified explanation of Planck’s constant from the University of Windsor:

“In 1900, Max Planck was working on the problem of how the radiation an object emits is related to its temperature. He came up with a formula that agreed very closely with experimental data, but the formula only made sense if he assumed that the energy of a vibrating molecule was quantized — that is, it could only take on certain values. The energy would have to be proportional to the frequency of vibration, and it seemed to come in little ‘chunks’ of the frequency multiplied by a certain constant. This constant came to be known as Planck’s constant, or h, and it has the value 6.626×10-34 J x s”

It’s complicated, but the philosophy behind the change is clean and simple: Scientists are using unchanging properties of nature — tiny, discrete bits of energy — to move the world from a relative unit of measurement into one that’s universal and absolute. 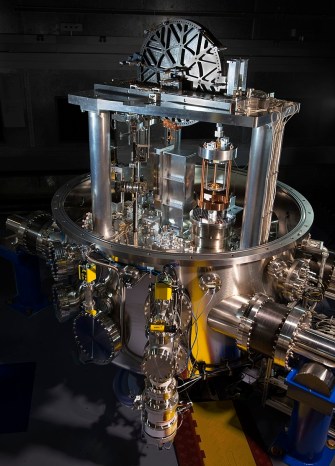 One upside to the change is decentralization. Soon, anyone will be able to derive the exact definition of a kilogram, while in the past you needed to directly compared the mass of an object to Big K, or one of its copies, to exactly measure a kilogram.

Now, you just need a Kibble balance, which, in simplified terms, can find Planck’s constant by translating the mechanical energy produced by the mass of an object into an equivalent amount of electrical energy. The Kibble balance is a highly expensive and complicated instrument, but they could become cheaper and more accessible in the future.

The International System of Units will also receive several other updates in 2019:

“If 90% of children had ADHD and only 10% of children could sit still at a desk, how would we design school?”
▸
4 min
—
with
Kathryn Paige Harden
Up Next
The Present

7 scientists we are thankful for this Thanksgiving

You may not recognize the names, but these seven scientists have improved the lives of people the world over.