New video simulations from NASA offer a glimpse of what sunsets might look like on other planets.

Created by Geronimo Villanueva, a planetary scientist at NASA’s Goddard Space Flight Center, the simulations are part of a computer modeling tool that scientists could someday use to study extraterrestrial atmospheres on probe missions. Villanueva simulated how skies might look as day turns to night on Venus, Mars, Uranus, and Saturn’s largest moon, Titan.

“The animations show all-sky views as if you were looking up at the sky through a super wide camera lens from Earth, Venus, Mars, Uranus, and Titan,” NASA wrote in a blog post. “The white dot represents the location of the Sun.”

The simulations reveal sunsets that look quite different from those on Earth. On Uranus, for example, the sky morphs from a royal blue to a hazy brownish-yellow. Why the difference? The color of the sky on any planet is determined by the unique blend of molecules in the atmosphere. When incoming sunlight passes through the atmosphere, these molecules scatter light in specific ways, causing light of certain wavelengths to appear more visible to the human eye.

NASA Scientist Simulates Kaleidoscope of Sunsets on Other Worldsyoutu.be

“When sunlight — which is made up of all the colors of the rainbow — reaches Uranus’s atmosphere, hydrogen, helium and methane absorb the longer-wavelength red portion of the light,” NASA wrote. “The shorter-wavelength blue and green portions of light get scattered as photons bounce off the gas molecules and other particles in the atmosphere. A similar phenomenon makes Earth’s sky appear blue on a clear day.”

So, why do skies change color as day turns to night? During the day, sunlight travels through the atmosphere to our eyes on a relatively short path. But as the sun sets, light must take a longer path through the atmosphere, which provides more opportunities for shorter wavelengths (blue) to be scattered. 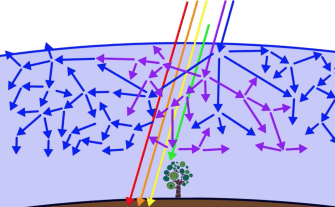 The result is a red sunset, produced by an optical phenomenon called Rayleigh scattering.

A sunset on Mars. Taken by the Viking 2 Lander on June 14, 1978, this was the first photo of an alien sunset.NASA

Villanueva‘s simulations are now featured on NASA’s Planetary Spectrum Generator, an online tool for studying the atmospheres and surfaces of distant planets. Studying alien atmospheres not only helps scientists better understand atmospheric processes on Earth, but also gives them a clearer idea of which planets may be habitable — or harbor life already.

Scientists track down a puzzling early burst of oxygen on Earth.
Up Next
Neuropsych

It turns out, letting your partner know you appreciate them leads to a stronger relationship. Who’d have thunk?