NASA carried out a third successful test of the RS-25 rocket engine, which will be part of its giant new Space Launch System (SLS) deep-space rocket. The test was conducted at the Stennis Space Center in Mississippi and lasted 7.5 minutes, with no issues arising.

“SLS is going to be the most powerful rocket ever built when it’s done several years from now. It’s going to have to throw up all this hardware into low Earth orbit so we can then take it to the Moon and beyond, all the way to Mars.”

The RS-25 rocket engines, built by Aerojet Rocketdyne, have powered 135 low-Earth orbit space shuttle missions over 30 years. But the engines are being tweaked to reach higher performance levels required by the SLS.

The SLS will be outfitted with four such engines and supercharged by two five-segment boosters.

Check out this video of the test:

Besides seeing how the engines perform when fired at higher levels, according to NASA, the tests are also collecting data on the work of a new engine controller unit or “brain” for the engine, which is responsible for controlling internal engine functions and enabling “proper communication between the SLS and the engine.”

Three more tests are upcoming in the next months, while the SLS will have an unmanned test flight with the Orion spacecraft in September 2018. The Orion crew capsule is designed to carry four astronauts.

Steve Wofford, manager of the SLS Liquid Engines Office at NASA’s Marshall Space Flight Center in Alabama, elaborated on the tests in an interview with Universe Today:

“We continue this test series in the fall. Which is a continuing part of our certification series to fly these engines on NASA’s SLS vehicle. Today’s test was mostly about wringing out the new control system. We have a new engine controller on this engine. And we have to certify that new controller for flight.”

The SLS will be higher than the Statue of Liberty and will be able to carry more than twice the payload of any of NASA former space shuttles.

Providing more details about the boosters, NASA explained that they are designed to work with the main engines for the first 2 minutes of flight, providing more than 75% of the thrust necessary to break from Earth’s gravitational pull. Oh and they will be about 17 stories high each, will be burning through 5 tonnes of propellant per second to create 3.6 million pounds of thrust. Talk about massive.

You want to meet the rocket? Here’s a helpful presentation from NASA: 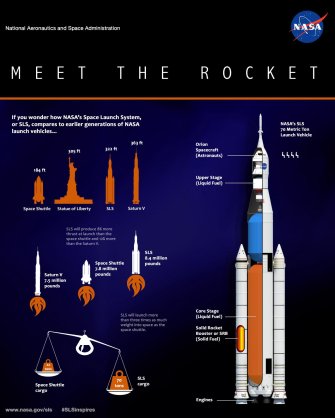 And here’s more about the RS-25 engine: 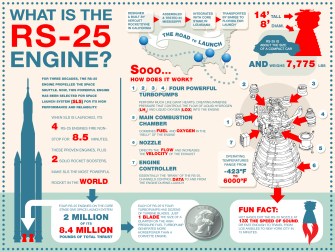 Tags
deep spaceenginemarsnasaRS-25test
In this article
deep spaceenginemarsnasaRS-25test
Related
Hard Science
Cracking a mystery about Vesta, our solar system’s second largest asteroid
How did the troughs form?
Hard Science
Earth’s first puff of oxygen may be thanks to volcanoes
Scientists track down a puzzling early burst of oxygen on Earth.
The Future
NASA wants future humans to find this time capsule in space
NASA will use energy from Earth’s gravity to launch the Lucy spacecraft in October of this year.
The Future
Which countries are going to Mars this decade?
We are likely to see the first humans walk on Mars this decade.
Hard Science
Why so gassy? Mysterious methane detected on Saturn’s moon
Scientists do not know what is causing the overabundance of the gas.
Up Next
Surprising Science
China Has Just Launched the World’s First Quantum Satellite
China’s new satellite is going to attempt to create uncrackable encryption using quantum mechanics.