NASA this week unveiled its new plan that many are calling “bold” and other lofty adjectives, with a 10-to-20-year span, each phase of which is somewhat dependent on what is learned during the first missions. It’s certainly aiming high: it’s going into low-Earth Orbit, to the Moon and its orbit (‘cislunar’), and then on to Mars and possibly other moons and surfaces, to be precise.

So what are the core goals of this new effort? 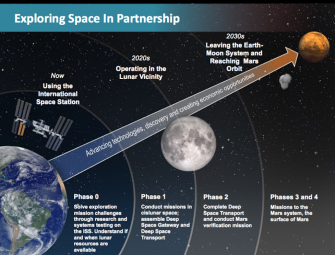 In a press release and more in-depth document released by the space agency, it lists the primary objectives:

These certainly mean more dollars headed toward research and development; while the original Apollo and other missions were government-funded and ultimately fell under the purview of the military (indeed, one of the primary stated goals of the Gemini and Apollo programs was to lessen the “Missile gap” between the United States and the Soviet Union), this new concept relies heavily on private investment, corporate involvement and funding, and the eventual mining and financial rewards of “exploration and use” of the lunar and Mars surfaces.

While it’s not the driving, all-encompassing effort that the first missions to the Moon were (and, really, how could it be?), it’s much better than letting NASA and other space entities languish and die.

“Based on inputs from current partners, commercial and other stakeholders, NASA will shape the plan for the transition of low-Earth orbit activities from direct government funding to commercial services and partnerships, with new, independent commercial platforms or a non-NASA operating model for some form or elements of the International Space Station by 2025. In addition, NASA will expand public-private partnerships to develop and demonstrate technologies and capabilities to enable new commercial space products and services.” An outpost near the Moon

This dovetails with the plan to privatize the International Space Station. Indeed, a part of this long-term plan is to replace it with a station orbiting the Moon that can then travel to planets such as Mars much more easily than overcoming Earth’s gravity and atmosphere. As NASA told Popular Mechanics, “Because the station [will be] in an egg-shaped orbit, stretching anywhere from 1,500 km to 70,000 km (930 to 44,000 miles) from the Moon, it would need only a little push to be sent flying to a yet-to-be-chosen destination.

With private companies beginning to have success in sending various things and even people into space, sometimes for financial reward, perhaps this is a sustainable way to fund future space development.

It would be nice, however, if there were a way to guarantee that new discoveries and resources would benefit the public good as well as private profit.

Dr. Sara Walker is an astrobiologist and theoretical physicist, who is questioning the very nature of life and how we’re attempting to find it elsewhere.
▸
6 min
—
with
Sara Walker
Up Next
Hard Science

In the 1990s, the two scientists made key discoveries that led to the development of promising new cancer-fighting immunotherapy drugs.