LinkedIn editors recently compiled an extensive round-up of companies hiring during the coronavirus pandemic. The list includes Instacart bringing in 300,000 contract workers, Walmart adding 150,000 workers in its distribution and fulfillment centers, and Lowe’s seeking an additional 30,000 employees to fill current demand. Nearly all jobs on offer deal with supply chain management in some capacity. At the very end of the list is an outlier:

“SpaceX is hiring an unknown number of workers as it looks to ramp up production of its Starships.”

While American corporations scramble to keep supplies moving (as well as potentially endangering workers accepting those jobs), Elon Musk is looking for an escape plan. Then again, the dream of inhabiting other planets and traveling to distant universes seems baked into the human imagination.

Musk isn’t the only one dreaming of a galaxy far, far away. NASA’s Artemis program, with the more humble goal of developing a consistent presence on the Earth’s moon, is full steam—er, solar electric propulsion—ahead with its plan of setting up camp by 2024. The agency hopes to land the first woman on the Moon’s surface that year, with the goal of “sustainable exploration” by 2028.

This news comes in the wake of a new 13-page report, “NASA’s Plan for Sustained Lunar Exploration and Development.” NASA believes that in the coming decades, the Moon will “be a source of new scientific advances and economic growth.” Once camp is established there, the agency hopes to use the Moon as a launch pad for the next stage in space exploration. 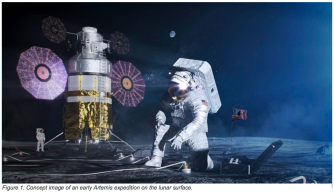 “After 20 years of continuously living in low-Earth orbit, we’re now ready for the next great challenge of space exploration – the development of a sustained presence on and around the Moon. For years to come, Artemis will serve as our North Star as we continue to work toward even greater exploration of the Moon, where we will demonstrate key elements needed for the first human mission to Mars.”

The astronauts will face many hurdles trying to establish a camp near the Moon’s south pole, such as radiation shielding, lunar dust, and extremely cold, long lunar nights. Once in place, these brave voyagers will test out new mobility technologies to help prepare humans for the next leap to Mars.

The report expresses interest in the development of relationships with private industry as well. While international partners are cited, there is an emphasis of America remaining at the forefront of space exploration:

“As other nations steadily increase their presence and spending, American leadership is now called for to lead the next phase of humanity’s quest to create a future comprised of endless discovery and growth in the final frontier.”

NASA goes so far to dub this the “Artemis Generation.” The agency puts forward a three-domain exploration strategy to coincide with the timeline of this generation. The first is low-Earth orbit, which it wants to open up to commercial operations and for testing new technologies; the second is the Moon, with the goal of long-term robotic explorations “with robust commercial and international partnerships”; and finally, Mars, which by reading over the document amounts to the grand goal of stating, “America was here first.” 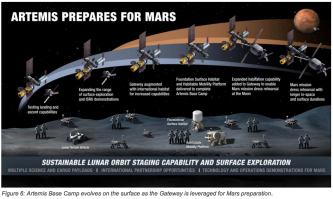 Kicking off this project in 2023 with robots, NASA’s ambitions include opening up “terrestrial robotic mining systems and next-generation power storage.” The robots will hunt for oxygen and water, or, as they frame it, “extraction of usable resources.” The more humans have at the ready, the easier the transition will be. The agency also believes that by intensively researching the Moon we will better understand the evolution of our own planet.

The first step is the development of the Gateway, the space travel path between Earth and the Moon. This requires numerous robot missions that establish a landing system in order to create a stable pathway for future astronauts to travel. There is political motive here as well: “The Gateway will establish U.S. leadership and a sustained presence in the region between the Moon and Earth.”

Thus far, Canada, Japan, and the European Space Agency have signed on as partners in the development of the Gateway. Russia has expressed interest in contributing an airlock. High priority items include a better understanding of heliophysics, radiation, and space weather. As the initial missions establish these conditions, the plan is to begin launching humans in four years’ time.

Upon establishing the Artemis Base Camp at the south pole, astronauts will spend from one to two months in order to “develop new technologies that advance our national industries and discover new resources that will help grow our economy.”

Though Mars (and beyond) is the long-term goal, the maximization of revenue seems to be the primary driver of this mission. Indefinite exploration of the Moon is in the plan, with the potential for commercial space travel. Besides, as NASA concludes, the moon is only “a relatively manageable 250,000 miles” away.

And yes, in case you were wondering, the “search for Martian life” is in there. Away we go.

“Should they strike, each of them has an energy at impact equal to all of the nuclear weapons on Earth combined.”
Up Next
Starts With A Bang