It’s not just a Hollywood exaggeration that an impact from an asteroid crashing into Earth would be massively catastrophic. Depending on the size of the asteroid, the effects could range from millions dead to an outright end of all life. Cities destroyed. Climate altered forever. Remember the dinosaurs?

To prevent such eventualities, space agencies around the world are working out planetary defense approaches. NASA and the European Space Agency (ESA) have teamed up on a historic first-ever test of an Earth defense systems with missions aimed at knocking an asteroid off course.

The Double Asteroid Redirect Test (DART) project takes particular aim at an asteroid duo consisting of a 780-meter-long asteroid called “Didymos” and its smaller orbiting rock, dubbed “Didymoon.” It’s about the size of the Pyramid of Giza (160m across).

The plan of NASA’s DART mission is to launch a probe in 2020-2021 which will get to Didymoon by October 2022. It will then crash into it while traveling at about 4 miles per second, moving it off previous course.

ESA’s Hera mission of 2026 will land a cube satellite on Diddymoon after the impact to study what happened and whether the orbit of the asteroid around the bigger rock changed. The Hera probe, which will be launched in 2023, will also gather information on the mass and surface properties of the asteroid, as well as examine the crater left by DART. The CubeSat will likely land near the asteroid’s poles.

“This will give us a good estimate of the impact’s momentum transfer, and hence its efficiency as a deflection technique,” expands Michael Küppers, the Hera project scientist. “These are fundamental parameters to enable the validation of numerical impact models necessary to design future deflection missions. We will better understand whether this technique can be used even for larger asteroids, giving us certainty we could protect our home planet if needed.” 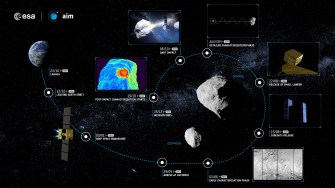 The giant rocks do not currently present a danger to Earth and were chosen because they will be seven million miles away from our planet even at their closest point. Additionally, Didymoon, which will be the smallest asteroid ever visited, is useful to study because its size makes it a bigger risk. Such rocks are harder to track. If it was to crash into Earth, the ensuing disaster would be horrific on a regional scale.

The missions will also help us gain a better understanding of binary asteroid systems, which make up about 15% of detected asteroids. They will also test technology that may prove useful for the burgeoning field of asteroid mining. 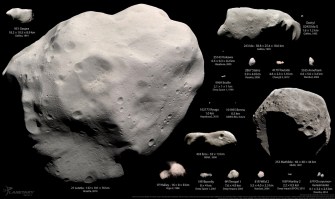 Asteroids and comets visited by spacecraft from Earth

“Should they strike, each of them has an energy at impact equal to all of the nuclear weapons on Earth combined.”
Up Next
Thinking