What lies in the alien seas of Titan, Saturn’s largest moon?

To find out, a team of researchers has spent years developing a plan that would send a submarine to explore the moon’s extremely inhospitable lakes and seas, potentially as soon as the 2030s. NASA hasn’t approved the mission, but the agency has granted the researchers two rounds of funding through the Innovative Advanced Concepts (NIAC) program.

If approved, the mission would be a massive undertaking, requiring the transport of a semi-autonomous, nuclear-powered submarine that’s 20 feet long and 3,300 pounds on a seven-year journey to Saturn.

“The mission concept we propose to study will investigate a full spectrum of oceanographic phenomena: chemical composition of the liquid, surface and subsurface currents, mixing and layering in the ‘water’ column, tides, wind and waves, bathymetry, and bottom features and composition.”

Later in the post, Oleson added that the mission could help scientists better understand how life evolved on Earth, and potentially on Titan. In a presentation with NASA’s Future In-Space Operations working group earlier this month, Oelson said:

“We feel that the Titan submarine is kind of a first step before you go do a [sub mission on] Europa or Enceladus.”

Titan has long been a top candidate for space research and the search for alien life within our solar system. But scientists didn’t know much about the Mercury-sized moon until 2004, when NASA’s Cassini spacecraft began conducting flybys of Titan, and later landed the Huygens probe on the moon’s surface.

That mission revealed that Titan is actually more like Earth than our Moon: Titan has an atmosphere with organic molecules and complex chemistry. It has rain and storms, which help to shape the dunes on its surface. And it has maria (seas) and lacus (lakes), some larger than the Great Lakes of North America. Besides Earth, no other body in our solar system has liquid on its surface like Titan does. 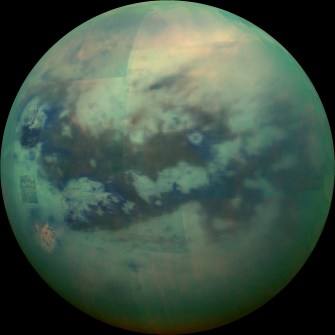 Still, it might be more accurate to think of Titan as a “deranged Earth,” as Caitlin Griffith, a professor in the UA Lunar and Planetary Laboratory, put it to Forbes. After all, Titan’s orangeish atmosphere is incredibly smoggy, made mostly of nitrogen and a bit of methane. Its surface is incredibly cold, at about -290 degrees Fahrenheit. And its frigid seas are made of ethane or methane, not water.

But the strange composition of Titan’s seas might not be a bad thing: It should be relatively easy for a submarine to travel through Titan’s seas, and the salty liquid wouldn’t interfere with radio signals. (Depending on the mission design, those signals would be beamed directly to Earth, or to a relay orbiter outside of Titan.)

The submarine would likely explore two of Titan’s largest northern seas, Kraken Mare and Ligeia Mare, which cover thousands of square miles and reach depths of 115 feet and 560 feet, respectively.

It’s unclear what the submarine might find. Organisms as we know them on Earth would have a tough time surviving in Titan’s seas, but scientists do generally agree that it’s possible the moon may harbor microbial life.

If the mission is approved, the submarine would likely need to reach Titan during the moon’s spring or summer, when there’s visible light. Given that each of Titan’s seasons last about seven years, that means the submarine would need to launch in the 2030s, if it’s going to happen in the mid-term future.

In 2026, NASA plans to launch a rotorcraft to Titan as part of a separate mission.

“With the Dragonfly mission, NASA will once again do what no one else can do,” said NASA Administrator Jim Bridenstine. “Visiting this mysterious ocean world could revolutionize what we know about life in the universe. This cutting-edge mission would have been unthinkable even just a few years ago, but we’re now ready for Dragonfly’s amazing flight.”

Utilizing nuclear waste converted to diamonds, this company's batteries will reportedly last thousands of years in some cases.