Scientists may have discovered the origins of ‘Oumuamua, the first interstellar object that was spotted visiting our Solar System.The reddish, dry, and strangely-elongated ‘Oumuamua, known to move in unexpected ways, has been a subject of much speculation. Some have, of course, brought up the idea it might an extraterrestrial spacecraft, possibly a probe. Now, scientists propose that tidal forces, gravitational interactions similar to those on Earth, are responsible for its existence and unusual behavior.

The cigar-shaped ‘Oumuamua is 400 meters (1,300 feet) in length and was first discovered on October 19, 2017 by the Hawaii-based Panoramic Survey Telescope and Rapid Response System 1 (Pan-STARRS1). Scientists and armchair astronomers the world over have since wondered about where it came from, especially in light of factors like its acceleration away from the Sun in a trajectory that is not explainable simply by the effects of gravity. 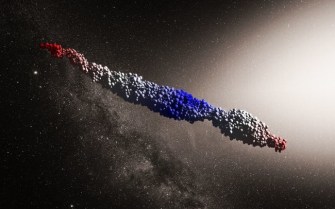 Simulation showing the interstellar object ‘Oumuamua as a collection of fragments in an elongated shape.

The new study, which was carried out by by Zhang Yun from National Astronomical Observatories of Chinese Academy of Sciences (NAOC) and Douglas N. C. Lin from University of California, Santa Cruz, says the object of mystery is natural. Clues pointing to that include the space body’s colors and the lack of any radio emissions coming from it.

While scientists expect an interstellar visitor to be icy, like a comet, Oumuamua is dry and has a rocky body like an asteroid, leading the researchers to conclude that there are more such rocky objects flying in between solar systems than they previously considered.

How did such an object come into existence? Zhang and Lin believe it’s a piece ripped off of another space body by a larger object. They conducted computer simulations, focusing on the example of the tidal disruption imposed by Jupiter on the comet Shoemaker-Levy 9 in 1992 to show that when a star is involved in such a fly-by, an outcome is possible that could create the elongated fragment like ‘Oumuamua’s. 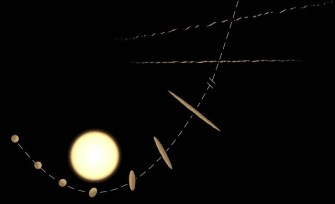 The effects of a tidal disruption by a star on a space object.

The researchers showed that after a space body is pulled apart by the star’s tidal forces, its fragments would melt and stretch into a cigar-shaped arrangement. The resulting parts would cool off as the object moves away from the star, hardening into a crust. It is subsequently propelled farther into space.

The scientists also have an explanation for the acceleration of an object like this, proposing that the Sun’s heating up of water ice under its surface can result in a release of gas that would act as a propellant.

“The tidal fragmentation scenario not only provides a way to form one single ‘Oumuamua, but also accounts for the vast population of rocky interstellar objects,” said Zhang. He thinks that all types of space objects, like long-period comets, debris disks, and possibly even planets, can be turned into ‘Oumuamua-size bodies upon getting close to a star.

“‘Oumuamua is just the tip of the iceberg,” said Lin, adding “We anticipate many more interstellar visitors with similar traits will be discovered by future observation with the forthcoming Vera C. Rubin Observatory.”

You can read the study in Nature Astronomy.

Was Oumuamua an alien spaceship? No. Here’s what it is.

Was Oumuamua an alien spaceship? No. Here’s what it is.

Tags
astronomycosmosextraterrestrialnasaphysicsplanetsspaceuniverse
In this article
astronomycosmosextraterrestrialnasaphysicsplanetsspaceuniverse
Related
The physics of entropy and the origin of life
How did complex systems emerge from chaos? Physicist Sean Carroll explains.
▸
6 min
—
with
Sean Carroll
The Universe in 90 minutes: The Multiverse, time, free will, God, & more
Everything you ever wanted to know about the Universe, explained by physicist Sean Carroll.
▸
1:33:47 min
—
with
Sean Carroll
Life
“I went to space and discovered an enormous lie”
What astronaut Ron Garan saw in space changed his life forever – here’s what it taught him.
▸
8 min
—
with
Ron Garan
Hard Science
10 paradoxes that will stretch your mind
From time-traveling billiard balls to information-destroying black holes, the world’s got plenty of puzzles that are hard to wrap your head around.
Videos
The true story behind Carl Sagan’s cult classic, Contact
Do aliens dream about meeting us, too?
▸
with
Jill Tarter
Up Next
The Present
How pandemics are used to promote racism and xenophobia
The current focus on the Chinese and Jews is nothing new.