Astronomers have calculated the first 100 million years of the history of the gigantic Oort cloud – a theoretical entity that contains 100 billion or so comet-like objects and forms a giant spherical shell around the sun and the rest of the solar system. NASA describes it as “a big, thick-walled bubble made of icy pieces of space debris the sizes of mountains and sometimes larger.”

The Oort cloud was named after Dutch astronomer Jan Hendrik Oort, who discovered it in the 1950s. He was looking to understand why some comets in the solar system have elongated orbits. Scientists now believe the Oort Cloud is the source of most such comets.

The cloud is believed to be extremely far from the sun, many times more distant than the outer reaches of the Kuiper belt, the area of the solar system past the orbit of Neptune that contains comets, asteroids, and small icy space bodies as well as the dwarf planet Pluto.

Oort cloud: the leftovers of the solar system

In a preprint article (accepted for publication in Astronomy & Astrophysics), a team of astronomers from Leiden University in the Netherlands describe how they used sophisticated computer simulations to determine how the Oort cloud formed.

They took a new approach by starting from separate events that might have happened in the early days of the universe and connecting them together. This allowed them to map out the full history of the origins of the gargantuan cloud.

As explained in their press release, the scientists used the ending calculations from one event as the starting calculation for the next event. 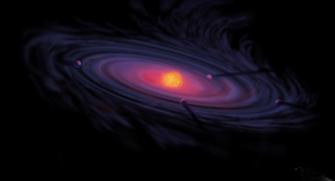 Their simulations confirmed that the Oort cloud is what remained of the protoplanetary disk of gas and debris from which it is believed our solar system formed about 4.6 billion years ago.

The cloud has comet-like objects made of debris from two places in the universe. Some of them are from nearby parts of the solar system, such as asteroids expelled by giant planets like Jupiter. Another group of objects in the Oort cloud comes from a thousand or so stars that were around when our sun was born, eventually drifting apart from each other.

“With our new calculations, we show that the Oort cloud arose from a kind of cosmic conspiracy,” said astronomer and simulation expert Simon Portegies Zwart from Leiden University, adding, “in which nearby stars, planets, and the Milky Way all play their part. Each of the individual processes alone would not be able to explain the Oort cloud. You really need the interplay and the right choreography of all the processes together.”

He added that the Oort cloud was ultimately produced by “the interplay and the right choreography of all the processes together.”

As it is so far away, humanity hasn’t yet built a telescope powerful enough to see the small, faint objects of the Oort cloud directly. By some estimates, it would take telescopes that are 100 billion times better than what we currently have to see into the cloud. Even the new James Webb Telescope that’s launching later in 2021 is unlikely to be able to see that far, confirmed Nobel laureate (and James Webb Telescope scientist) Dr. John Mather.

It would also take humanity a long time to reach the Oort cloud. As NASA estimated, even if you consider that the Voyager 1 probe can cover about a million miles every day, it would take it about 300 years to reach the inner edge of the Oort Cloud. And to get all the way through, it would likely require another 30,000 years.

The key problem with the dark matter hypothesis is that nobody knows what form dark matter might take.
The Past

NASA was dangerously cavalier about the dangers of the shuttle launches.
Starts With A Bang

There’s an extra source of massive “stuff” in our Universe beyond what gravitation and normal matter can explain. Could light be the answer?
Starts With A Bang

If you have an old TV set with the “rabbit ear” antennae, and you set it to channel 03, that snowy static can reveal the Big Bang itself.
Starts With A Bang

We were wrong: all stars don’t have planets, after all

Unless you have a critical mass of heavy elements when your star first forms, planets, including rocky ones, are practically impossible.
Up Next
Neuropsych

This discovery could lead to better treatments for PTSD, borderline personality disorder, and epilepsy.