For the first time, scientists have confirmed the presence of water on the sunlit surface of the moon, a discovery with major implications for future moon missions and deep-space exploration.

Since the 1990s, a series of observations have suggested the moon harbors ice, but scientists haven’t been able to confirm whether the data was signaling the presence of water (H2O) or a chemical relative called hydroxyl, which is oxygen bonded with hydrogen. In 2018, scientists confirmed that water — in the form of ice — exists in the moon’s polar regions.

Now, a new study confirms that water — not just hydroxyl — exists on sunlit surfaces of the moon.

💦🌚 Water molecules were found in Clavius Crater, one of the largest craters visible from Earth on the Moon! This discovery from our @SOFIAtelescope indicates that water may be distributed across the surface, & not limited to cold, shadowed places. More: https://t.co/oIcCbbl50Y pic.twitter.com/Q5Ve6QwZJM

Publishing their findings in the journal Nature Astronomy on Monday, researchers examined the lunar surface using NASA’s Stratospheric Observatory for Infrared Astronomy (SOFIA). This airborne observatory is mounted on a customized Boeing 747 that flies at an altitude of about 45,000 feet. That’s high enough to rise above Earth’s lower atmosphere, which contains water vapor that prevents land-based observatories from getting a clear view of the moon.

Using SOFIA, the team took a close look at two sites near, one near the lunar equator and another near the Clavius crater, one of the largest craters on the moon. The researchers observed light signals that could only have come from molecular water.

“We had indications that H2O – the familiar water we know – might be present on the sunlit side of the Moon,” Paul Hertz, director of the Astrophysics Division in the Science Mission Directorate at NASA Headquarters in Washington, said in a statement. “Now we know it is there. This discovery challenges our understanding of the lunar surface and raises intriguing questions about resources relevant for deep space exploration.” 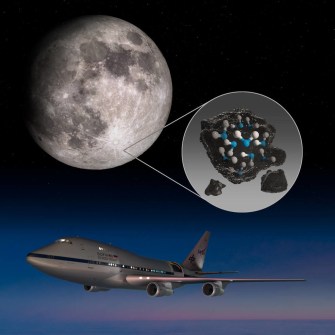 Still, it’s not as if the moon is dripping wet. The observations suggest that a cubic meter of the lunar surface (in the Clavius crater site, at least) contains water in concentrations of 100 to 412 parts per million. That’s roughly equivalent to a 12-ounce bottle of water. In comparison, the same plot of land in the Sahara desert contains about 100 times more water.

Some of these permanently shadowed regions are huge, extending more than a kilometer wide. But others span just 1 cm. These smaller “micro cold traps” are much more abundant than previously thought, and they’re spread out across more regions of the lunar surface, according to the new research.

Still, the second study didn’t confirm that ice is embedded in micro cold traps. But if there is, it would mean that water would be much more accessible to astronauts, considering they wouldn’t have to travel into deep, shadowy craters to extract water.

Greater accessibility to water would not only make it easier for astronauts to get drinking water, but could also enable them to generate rocket fuel and power.

“Water is a valuable resource, for both scientific purposes and for use by our explorers,” said Jacob Bleacher, chief exploration scientist in the advanced exploration systems division for NASA’s Human Exploration and Operations Mission Directorate, in a statement. “If we can use the resources at the Moon, then we can carry less water and more equipment to help enable new scientific discoveries.”

Dr. Sara Walker is an astrobiologist and theoretical physicist, who is questioning the very nature of life and how we’re attempting to find it elsewhere.
▸
6 min
—
with
Sara Walker
Up Next
Neuropsych

The area of the brain that recognizes letters and words is ready for action right from the start.