The moon landing was definitely one of humanity’s most amazing achievements. It could have also been one of its most dangerous moments. Apollo 11 astronauts who took part in the landing revealed that there’s a chance Earth could have been contaminated with lunar germs as a result of their mission.

NASA actually had procedures in place to address any possible spread of bacteria from space to our home planet but the measures had key deficiencies, asserted astronaut Michael Collins in the new PBS documentary “Chasing the Moon”. He wasn’t actually one of the people who walked on the moon. But he was in the command module when his crewmates came back from the lunar vehicle. At that moment, he would have been “exposed,” as he admitted, to the lunar germs, if there were any.

His point about what happened once the command module splashed down in the Pacific were re-enforced by Buzz Aldrin, who did get to walk on the moon and could have been the one carrying the potential germs. He especially remembered the discarded rags that were used to disinfect him once he was pulled out of the module.

“You have to laugh a little bit,” Aldrin mused. “It takes all those germs to the bottom of the ocean. I wonder if they’d survive down there?” 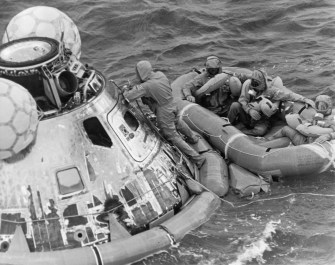 Apollo 11 astronauts actually spent 21 days in quarantine, released without any noticeable issues. Future missions Apollo 15 through 17 of 1971-1972 also had men walking on the moon but did not employ any quarantine measures, according to Scientific American. This lack of precaution was precipitated by the analysis of lunar samples from previous missions, which showed no life forms.

The spray uses snippets of DNA to gum up virus replication.
Health

At long last, we might have an HIV vaccine

HIV mutates rapidly, which has made the development of a vaccine an enormous challenge for decades. Finally, we might have one.
The Past

Medieval friars were possessed by parasites

Roundworms at the monastery.
Up Next
Think Again Podcasts

identity, intolerance, and change in the American heartland – with Jeanine and Catherine Butler

The first church to marry gay couples in Oklahoma. The merging of a congregation founded by a white supremacist with the members of a black Pentacostal congregation. The film American Heretics explores the complexities of religious life in the Bible Belt as it intersects with politics and race.