Skip to content
Who's in the Video
Matt Davis
Matt Davis writes stories about science, technology, bizarre anecdotes from history, esoteric odds and ends, bleak but nevertheless fascinating environmental issues, and whatever else grabs his easily grabbed attention.
Go to Profile
Hard Science
Watch scientists melt a satellite part to save us from space junk
Not every part of a satellite burns up in reentry. Considering the growing number of satellites in orbital space, that's a big problem.
▸
with
Matt Davis

It’s a simple fact that where there are humans, there’s trash. Earth’s orbit is no exception. The Space Surveillance Network keeps track of 22,300 bits of space junk orbiting the Earth, but there’s almost certainly more than this. Statistical models estimate that there are 34,000 objects larger than 10 centimeters; 900,000 from 1 cm to 10 cm; and 128,000,000 objects between 1mm and 1cm in space. And this is a significant problem.

If some of this space debris strikes a satellite, it could destroy that satellite, creating more bits of space debris that may strike other satellites in a chain reaction of catastrophe called the Kessler syndrome. To avoid this, it’s important that we design satellites so that they can fall back to Earth and burn up in the atmosphere. This represents part of the mission of the European Space Agency’s (ESA’s) CleanSat initiative. This initiative is focused on keeping our use of space sustainable so that we can continue to enjoy the benefits of GPS, weather modeling and other satellite-based services.

It’s also the reason why researchers blasted a magnetotorquer, a piece of satellite technology, in a plasma wind tunnel, heating it to several thousands of degrees Celsius within the hypersonic plasma until it was mostly vaporized. You can watch it happen in the video above. And here’s a picture of the aftermath.

“Satellite reentry is not a single event but rather a process,” explains Tiago Soares of CleanSat. “From observations, we see the main body break apart typically at 70–80 km altitude, after which the insides are scattered. The kind of objects that can survive down to the surface are propellant tanks made from materials with high melting points, such as titanium or stainless steel, along with dense items such as optical instruments and large mechanisms.”

One such dense item is a magnetotorquer. This device helps satellites interact with Earth’s magnetic field to orient the satellite, and it’s made of some sturdy stuff. The outside is composed of a carbon fiber–reinforced polymer, while the inside is made of copper coils and an iron-cobalt core. 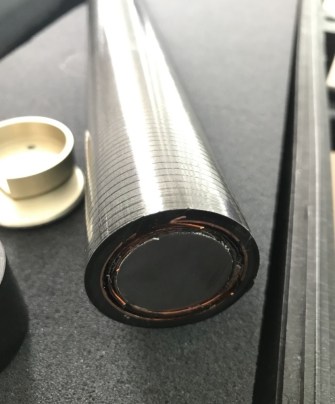 The magnetotorquer prior to being melted.

What is D4D? Design for demise.

Generally, parts of spacecraft and satellites burn up in reentry, but some sturdy pieces can survive the reentry process, or are instead only broken up into potentially deadlier fragments. In 1997, for example, a woman in Tulsa, Oklahoma, was struck by a small fragment from a Delta rocket, though she wasn’t injured. She could have been, however: hundreds of miles away, two Texans were woken up in the middle of the night when the 250kg fuel tank from that same rocket fell just 50m from their farmhouse.

Avoiding incidents like these is why researchers wanted to observe the magnetotorquer as it was subjected to the high heat from the kind of plasma it would generate on reentry. Modern spacecraft are built according to the design-for-demise concept, or D4D. D4D is the idea that satellites should be designed so that as few of their parts as possible can survive reentry or so that they can be safely pushed off into quieter parts of space after their lifespan ends.

Thanks to D4D and modern regulations, there’s a 1 in 10,000 chance that a dead satellite in an uncontrolled reentry could hurt anyone on the ground. But some components of a spacecraft are too sturdy to burn up during reentry, such as optical instruments, propellant and pressure tanks, reaction wheels (which are gyroscopes that change a satellite’s direction), and magnetotorquers.

“As part of CleanSat,” said Soares, “we are looking into making such objects more destructible. Perhaps through new aluminum alloys for tanks, for example. However, even redesigned parts will not melt if they are not exposed to the searing heat early enough. This shows the need to adopt an overall approach to D4D, such as opening up the satellite body as early as possible during reentry.” That’s why ESA blasted the magnetotorquer in a plasma wind tunnel. Doing so provides insights into the dynamics of satellite reentry, which will in turn enable us to make a cleaner, safer orbital space.

Up Next
Michio Kaku: Genetic and digital immortality are within reach
▸
4 min
—
with
Michio Kaku