Here’s the recipe to make a black hole: start with a sizeable amount of hydrogen, enough to make a star about 25 times the mass of the sun. That hydrogen will begin burning into helium. Let the star cook for a few million years, and it’ll start to run out of hydrogen to burn. Then it will begin burning helium into carbon or oxygen, these elements will fuse to make others in a chain of different fusion reactions, and eventually it will start producing iron. Iron can’t produce energy via fusion, so the star will run out of the fuel that made it a star. Its mass will collapse inward and bounce off the iron core, producing a supernova. If you started with a big enough star, then much of its mass will be concentrated in a space so dense that light cannot escape, resulting in a perfectly cooked black hole.

While it’s the classic recipe, there are actually several ways to make black holes, but none are quite so interesting as the kugelblitz. 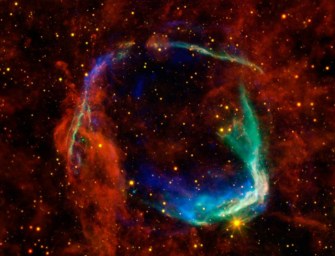 The clouds of elements, or nebula, left behind after a supernova. When a star explodes in a supernova, often, a black hole is left behind.

A black hole made from light

As far as we know, most black holes are made from a tremendous amount of matter being concentrated in a very tightly packed space. In theory, though, this doesn’t have to be the case. Einstein’s formula E = mc2 tells us that energy is equivalent to matter times the speed of light squared. In regard to making black holes, this has three important implications for us: mass and energy are equivalent, mass has a tremendous amount of energy locked away inside of itself, and gravity treats mass and energy the same.

Here’s where the kugelblitz comes in. German for “ball lightning,” a kugelblitz is a black hole made from light rather than matter. By light, we mean any kind of radiation, really. Although light has no mass, it does have energy. Since gravity treats mass and energy the same, in theory, we can focus enough radiation into a tiny space and produce an event horizon, an area in space so densely packed (with either matter or energy) that nothing can escape.

If we developed a laser that shot gamma rays (the most energetic form of electromagnetic radiation) that was magnitudes more powerful than any laser ever built and focused it on a very precise point in space, we could make ourselves a kugelblitz. A single pulse of this laser would need to put out an amount of energy equivalent to the sun in about 1/10 of a second, but we could theoretically construct such a device in the distant future. 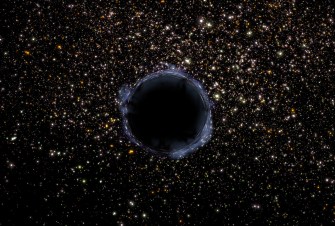 An artist’s depiction of a black hole.

Why would we want to do this?

Jeffrey Lee of Baylor University has written several papers on kugelblitz black holes, one of which focuses on its potential practical uses. In an 2015 article for the Journal of the British Interplanetary Society called “Acceleration of a Schwarschild Kugelblitz Spaceship,” Lee lays out the theoretical underpinnings of using a kugelblitz to, well, accelerate a spaceship.

If we had the capability to surround a kugelblitz with a Dyson sphere — hypothetical structures typically conceived of as surrounding and collecting the energy from stars — then we could capture the immense amount of energy it produces in the form of Hawking radiation. Since we would want to strike a balance between the kugelblitz’s energy output and its lifespan (remember, the larger the black hole, the less Hawking radiation it produces, the longer it lives, and vice versa), Lee suggests producing an attometer-sized kugelblitz. That’s a black hole one quintillionth the size of a meter.

Such a black hole would “live” for about 5 years and produce 129 petawatts of power, or 129 billion million watts. Attached to a perfectly efficient engine of a spacecraft, we could accelerate to 72% the speed of light before the kugelblitz dies, making interstellar travel a much more feasible proposition.

The hottest thing since the Big Bang

Here’s the problem: That temperature is so hot that the math we use to predict the laws of physics breaks down. It’s not that physics itself ceases to exist, but that our understanding is too limited to accurately say what will happen. As we progress in our technological capabilities and theoretical understanding, though, it may be that the use of kugelblitzes in spacecraft becomes our preferred method for interstellar travel.

Nature is a whole. The sciences should be, too.
The Well

Dr. Sara Walker is an astrobiologist and theoretical physicist, who is questioning the very nature of life and how we’re attempting to find it elsewhere.
▸
6 min
—
with
Sara Walker
Thinking

If we are wreaking havoc on ourselves and the world, it is because we have become mesmerized by a mechanistic, reductionist way of thinking.
The Well

Michio Kaku believes math is the mind of God.
▸
6 min
—
with
Michio Kaku
Up Next
The Present

The mystery material that can survive 75 nuclear blasts

Recipe for awe: Coat one egg with Starlite. Blast it with a ridiculous amount of heat until charred black. Crack it open.