Gilbert V. Levin is clearly aggravated with NASA, frustrated by the agency’s apparent unwillingness to acknowledge what he considers a fact: That NASA has had dispositive proof of living microorganisms on Mars since 1976, and a great deal of additional evidence since then. Levin is no conspiracy theorist, either. He’s an engineer, a respected inventor, founder of scientific-research company Spherix, and a participant in that 1976 NASA mission. He’s written an opinion piece in Scientific American that asks why NASA won’t follow up on what he believes they should already know. 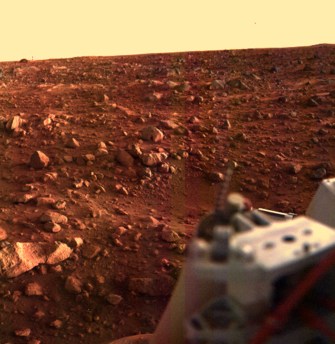 As the developer of methods for rapidly detecting and identifying microorganisms, Levin took part in the Labeled Release (LR) experiment landed on Mars by NASA’s Viking 1 and 2.

At both landing sites, the Vikings picked up samples of Mars soil, treating each with a drop of a dilute nutrient solution. This solution was tagged with radioactive carbon-14, and so if there were any microorganisms in the samples, they would metabolize it. This would lead to the production of radioactive carbon or radioactive methane. Sensors were positioned above the soil samples to detect the presence of either as signifiers of life.

At both landing sites, four positive indications of life were recorded, backed up by five controls. As a guarantee, the samples were then heated to 160°, hot enough to kill any living organisms in the soil, and then tested again. No further indicators of life were detected.

According to many, including Levin, had this test been performed on Earth, there would have been no doubt that life had been found. In fact, parallel control tests were performed on Earth on two samples known to be lifeless, one from the Moon and one from Iceland’s volcanic Surtsey island, and no life was indicated.

However, on Mars, another experiment, a search for organic molecules, had been performed prior to the LR test and found nothing, leaving NASA in doubt regarding the results of the LR experiment, and concluding, according to Levin, that they’d found something imitating life, but not life itself. From there, notes Levin, “Inexplicably, over the 43 years since Viking, none of NASA’s subsequent Mars landers has carried a life detection instrument to follow up on these exciting results.”

A thin coating of water ice on the rocks and soil photographed by Viking 2Image source: NASA

Levin presents in his opinion piece 17 discoveries by subsequent Mars landers that support the results of the LR experiment. Among these: 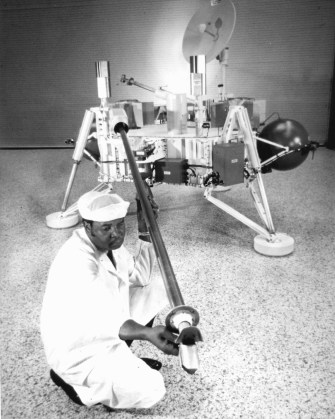 A technician checks the soil sampler of a Viking lander.Image source: NASA

By 1997, Levin was convinced that NASA was wrong and set out to publish followup research supporting his conclusion. It took nearly 20 years to find a venue, he believes due to his controversial certainty that the LR experiment did indeed find life on Mars.

Levin tells phys.org, “Since I first concluded that the LR had detected life (in 1997), major juried journals had refused our publications. I and my co-Experimenter, Dr. Patricia Ann Straat, then published mainly in the astrobiology section of the SPIE Proceedings, after presenting the papers at the annual SPIE conventions. Though these were invited papers, they were largely ignored by the bulk of astrobiologists in their publications.” (Staat is the author of To Mars with Love, about her experience as co-experimenter with Levin for the LR experiments.)

Finally, he and Straat decided to craft a paper that answers every objection anyone ever had to their earlier versions, finally publishing it in Astrobiology’s October 2016 issue. “You may not agree with the conclusion,” he says, “but you cannot disparage the steps leading there. You can say only that the steps are insufficient. But, to us, that seems a tenuous defense, since no one would refute these results had they been obtained on Earth.”

Nonetheless, NASA’s seeming reluctance to address the LR experiment’s finding remains an issue for Levin. He and Straat have petitioned NASA to send a new LR test to the red planets, but, alas, Levin reports that “NASA has already announced that its 2020 Mars lander will not contain a life-detection test.”

Nudging meat off the menu

How do you convince people to break the habit of a lifetime?