Leon Lederman, a Nobel laureate and particle physicist celebrated for his sense of humor and ability to explain physics to the general public, has died at the age of 96.

During his long and decorated career, Lederman directed the Fermi National Accelerator Laboratory, coined ‘the God particle’ as a popular term for the Higgs boson, and conducted groundbreaking research that helped lay the foundations for the Standard Model of particle physics, which scientists use to explain nearly every force in the universe besides gravity.

In 1988 Lederman and two of his colleagues won the Nobel Prize in Physics for discovering a second type of neutrino, the muon. (Scientists later discovered a third called the tau.) The Nobel Foundation wrote:

“In decays of certain elementary particles, neutrinos are produced; particles that occasionally interact with matter to produce electrons. Leon Lederman, Melvin Schwartz, and Jack Steinberger managed to create a beam of neutrinos using a high-energy accelerator. In 1962, they discovered that, in some cases, instead of producing an electron, a muon (200 times heavier than an electron) was produced, proving the existence of a new type of neutrino, the muon neutrino. These particles, collectively called “leptons”, could then be systematically classified in families.”

In addition to discovering and experimenting with subatomic particles, Lederman also promoted the importance of particle physics to the general public, most prominently in his 1993 bestselling book The God Particle: If the Universe Is the Answer, What Is the Question?

He described his choice to nickname the Higgs boson like this:

“This boson is so central to the state of physics today, so crucial to our final understanding of the structure of matter, yet so elusive, that I have given it a nickname: the God Particle. Why God Particle? Two reasons. One, the publisher wouldn’t let us call it the Goddamn Particle, though that might be a more appropriate title, given its villainous nature and the expense it is causing. And two, there is a connection, of sorts, to another book, a much older one… “

To say the nickname was disliked by physicists, including Peter Higgs himself, would be an understatement. In a 2009 article for The Guardian, science journalist Ian Sample asks a Manchester University physicist what he thinks of the name:

“He paused. He sighed. And then he said: “I really, really don’t like it. It sends out all the wrong messages. It overstates the case. It makes us look arrogant. It’s rubbish.” He then added: “If you walked down the corridor here, poked your head into people’s offices, and asked that question, you would likely be struck by flying books.” 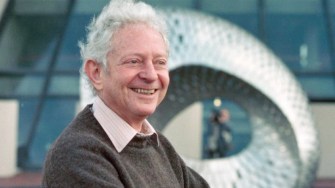 Although he was an atheist, Lederman didn’t propose that physics could provide an all-encompassing explanation for our universe.

“There’s always a place at the edge of our knowledge, where what’s beyond is unimaginable, and that edge, of course, moves,” Lederman told The New York Times in 1998, adding that we might know the laws of physics but we don’t know where they came from, leaving us “stuck.”

“I usually say, ‘Go across the street to the theology school, and ask those guys, because I don’t know.'”

In 2015, Lederman’s Nobel Prize gold medal was auctioned off for $765,002 to pay for his medical bills that resulted from dementia.

“I’m shocked it sold at all,” Lederman’s wife, Ellen, told The Associated Press. “It’s really hard. I wish it could be different. But he’s happy. He likes where he lives with cats and dogs and horses. He doesn’t have any problems with anxiety, and that makes me glad that he’s so content.”

Lederman once described the mindset in which he often found himself doing his best work. “The best discoveries always seem to be made in the small hours of the morning, when most people are asleep, where there are no disturbances and the mind becomes most contemplative,” he told science writer Malcolm W. Browne in Discover magazine in 1981.

Light carries with it the secrets of reality in ways we cannot completely understand.
Hard Science

The quantum world is one in which rules that are completely foreign to our everyday experience dictate bizarre behavior.
Up Next
The Present

Women are more productive than men at work these days

It’s just one of the workplace gender insights in a new study.